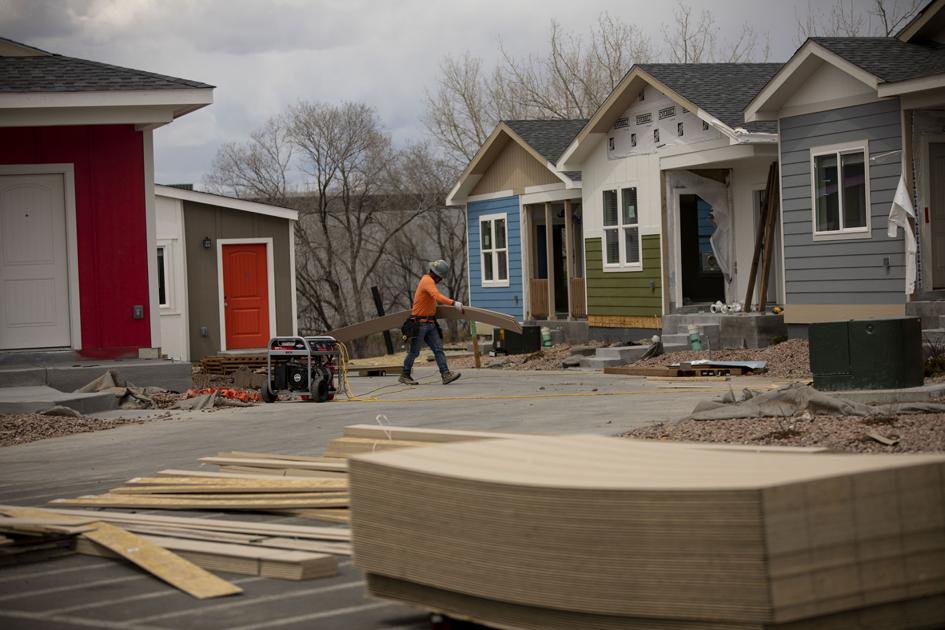 When it opens next month on Colorado Springs’ southeast side, The Cottages at Sand Creek won’t be like most apartment projects built these days in the city.

It’s made up of 42 single-story buildings, looking more like a tiny-home village than an apartment project. Each building has two dwelling units, which share a common wall akin to a duplex. And the project’s total of 84 units are far fewer than the hundreds of apartments often found in sprawling suburban complexes.

But it’s the construction of The Cottages at Sand Creek that especially sets it apart, says Goodwin Knight, the Colorado Springs development company that’s building the project and several more like it around town.

Unlike traditional apartments where materials and equipment are hauled to a construction site and buildings take shape from the ground up, The Cottages at Sand Creek are composed of modular, prefabricated buildings that were manufactured at a factory in Pueblo.

Heating, electrical and plumbing systems, kitchen cabinets, bathrooms, walls, flooring, roofs and most other features were installed while the buildings were constructed at the factory.

They were then trucked from Pueblo to The Cottages’ site, east of Murray Boulevard and Chelton Road and fronting along the Sand Creek Trail. A crane lifted the buildings onto concrete foundations, where they were permanently installed and two units were joined to create a single structure. Appliances were added later as one of the final steps in the process.

As a result, the units — whose features include granite countertops, stainless steel appliances, washers and dryers and air conditioning — will rent for less and offer a housing option for residents who can’t afford pricier suburban-style apartments.

“We can create a neighborhood of really nice units at the end of the day, and serve that market segment that maybe is overlooked in a lot of cases, with the single mother, the single guy, these small families just starting out,” said Bryan Kniep, Goodwin Knight’s vice president of planning and community development. “They can’t afford a $1,300-a-month, one-bedroom apartment in a really super nice community, but want some place nice and safe and unique to live.”

Local apartment rents have set record highs several times in recent years, and averaged just over $1,200 a month during the fourth quarter in Colorado Springs, according to a Colorado Division of Housing report.

The Cottages at Sand Creek will rent for a few hundred dollars less than some of the more traditional projects Goodwin Knight has developed in the area, although units at The Cottages are smaller in size. Some examples:

• A 360-square-foot studio apartment at The Cottages goes for $859 a month, according to Griffis/Blessing, the Springs company that’s serving as the project’s property manager. At 22 Spruce, a 48-unit, urban-style Goodwin Knight apartment building just west of downtown Colorado Springs, one studio floor plan rents for $1,146 and another goes for $1,175, Griffis/Blessing’s website shows. Both are roughly one-fourth larger at 477 and 495 square feet.

• A two-bedroom, two-bathroom, 836-square-foot unit at The Cottages will rent for $1,199 a month, according to Griffis/Blessing. At the soon-to-open Retreat at Patriot Park, a Goodwin Knight project northwest of Powers Boulevard and Platte Avenue, two-bedroom, two bathroom units of 1,017 square feet start at $1,595 a month.

Apartments at The Cottages have their own look and feel because of how they’re built.

The buildings are long and narrow so that they can be transported via truck to the job site. Several buildings have a small front porch, where renters enter their units via separate front doors.

Though less expensive and with smaller units, The Cottages at Sand Creek offers amenities similar to other multifamily properties, including a small clubhouse, fitness center, playground and picnic area with a barbecue. There’s no pool, but the nearby Sand Creek Trail offers another amenity for renters, Kniep said.

Brian Bahr, Goodwin Knight’s chairman and CEO and whose Challenger Homes is one of the area’s largest single-family home builders, said he began looking years ago for cheaper ways to build apartments. Inefficient multistory construction methods essentially were making an 800-square-foot apartment more expensive to build than a 2,500-square-foot house, he said.

He began exploring different options, including automation and robotics, and traveled around the country to research modular construction and other building concepts. Modular construction to build single-family homes isn’t new, but using it to create apartments and condominiums has gained in popularity over the last several years.

“We had to find a way to be more streamlined and efficient with our production,” Bahr said.

Assembling buildings in an off-site factory, he said, allows Goodwin Knight to control the consistency and quality of construction, while making maximum use of a shrinking base of tradesmen — carpenters, roofers and the like — who don’t have to travel to job sites.

Last year, a unit of the Challenger Group — the parent company of Challenger Homes and Goodwin Knight — opened a 63,000-square-foot factory in Pueblo, where it received tax breaks to locate. The factory employs about 80 full-time people.

Many affordable housing projects are financed with low-income tax credits or U.S. Department of Housing and Urban Development subsidies. Goodwin Knight, however, used conventional financing for The Cottages at Sand Creek, which will allow it to charge market-rate rents.

“There is a tremendous need in every community for housing that people can actually afford to live in,” Bahr said. “So many households are cash poor because of being stretched for housing.”

The company also has submitted proposals to city planners for two more developments totaling about 340 units. Unlike The Cottages at Sand Creek, other projects will have a mix of one- and two-story buildings.

Goodwin Knight also will look to expand the cottage concept to other parts of the state, and intends to build the majority of its projects at its Pueblo factory, Bahr said.

The Cottages will be a welcome addition in Colorado Springs, said Laura Nelson, executive director of the Apartment Association of Southern Colorado. The community needs a mix of housing, and the cottages concept could appeal to millennials and seniors, she said.

“It is actually sort of ideal right now for the market,” Nelson said. “Obviously, we need a variety of prices of apartments to meet everybody’s needs. … It really is exactly what the community needed. Rarely do you get a brand new product at a more reasonable (rental) rate.”

Cary Bruteig, principal at Apartment Appraisers & Consultants in Denver and who’s worked for Goodwin Knight, said The Cottages at Sand Creek is the first project of its kind — modular, prefabricated rental units — that he’s seen along the Front Range.

“It’s almost everybody’s desire to provide new, quality affordable housing, and developers are doing their best to be creative and come up with different solutions,” Bruteig said. “I think Goodwin Knight has come up with a completely original solution to that problem. To that end, I think that they’re using their creativity in using manufactured housing in trying to keep the overall concept, style, finishes and amenities attainable.”

“To the extent that you can offer lower cost housing than the competition, it is a good idea,” he said.

So far, 13 leases have been signed by renters at The Cottages, but another 153 have shown interest and want more information, said B.J. Hybl, president and chief operating officer at Griffis/Blessing. Renters should be able to move in starting May 1, he said.

Hybl said he suspects the number of signed leases would have been much higher by now, but the COVID-19 pandemic and the state’s stay-at-home order has restricted Griffis/Blessing’s ability to show the property to prospective renters.

If there’s a criticism, Kniep acknowledged some people might see the cottages as just a step above a trailer park. Others might confuse them with lower quality mobile homes, which use cheaper construction standards and aren’t installed on permanent foundations, Bahr said.

Both reject the labels.

“The whole purpose for why our company exists is to make life better,” Bahr said, citing Goodwin Knight’s mission statement. “The way we do that is by adding more value, to deliver more value to customers. In the end, our customer is the renter for Goodwin Knight. If we can be more efficient and deliver a better product, and it costs us less, allowing us to pass through better rental rates and a better lifestyle, then we are making life better for those tenants for as long as they live with us.”