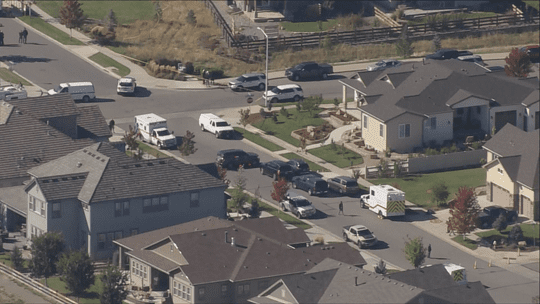 A postal worker was fatally shot while delivering mail in Longmont on Wednesday and the suspect remains at-large, the Longmont Police Department said.

Police responded to multiple reports of a shooting near Heatherhill Street and Renaissance Drive in southwest Longmont about 12:30 p.m.

Officers arrived and located the unidentified mail carrier in front of a neighborhood mailbox. The man was shot multiple times and pronounced dead at the scene, said Jeff Satur, the Longmont Police Department Chief of Police Services during an afternoon press conference.

Multiple callers told authorities a man was seen leaving the area of South Renaissance Drive on foot after the shooting. He was wearing dark clothing, a dark hoodie and blue mask, Satur said.

A shelter-in-place order was issued for the surrounding area as police used canines and other efforts to try and locate the shooter. However, the search was unsuccessful and the order was lifted at 2 p.m.

No arrests have been made and police have not released a description of the shooter.

“This has impacted us very deeply,” said David Rupert, communications manager for the United States Postal Service. “It’s tragic, it’s terrible and it hurts us all very deeply.”

Satur said the department is currently following-up on several leads, however, he could not say whether there was an ongoing threat to the public.

“I can’t address a threat to the public right now, but I can tell you we searched the area very carefully with canines, a lot of officers, and we did some neighborhood canvasses,” Satur said. “But we do have a number of leads were following up on.”

Police said residents should expect heavy police presence in the area for several hours as local and federal investigators process the scene.

The U.S. Postal Inspector Service and the 20th Judicial District Attorney’s Office is assisting with the investigation. Federal investigators are on-scene since the mail carrier is a federal employee, which means the shooter could face federal charges if caught, Satur said.

District Attorney Michael Dougherty declined to talk about the legal process when working with federal and local partners, but insisted every agency is on the same page.

Any witnesses or residents in the immediate area with surveillance cameras are asked to call police at (303) 651-8501.