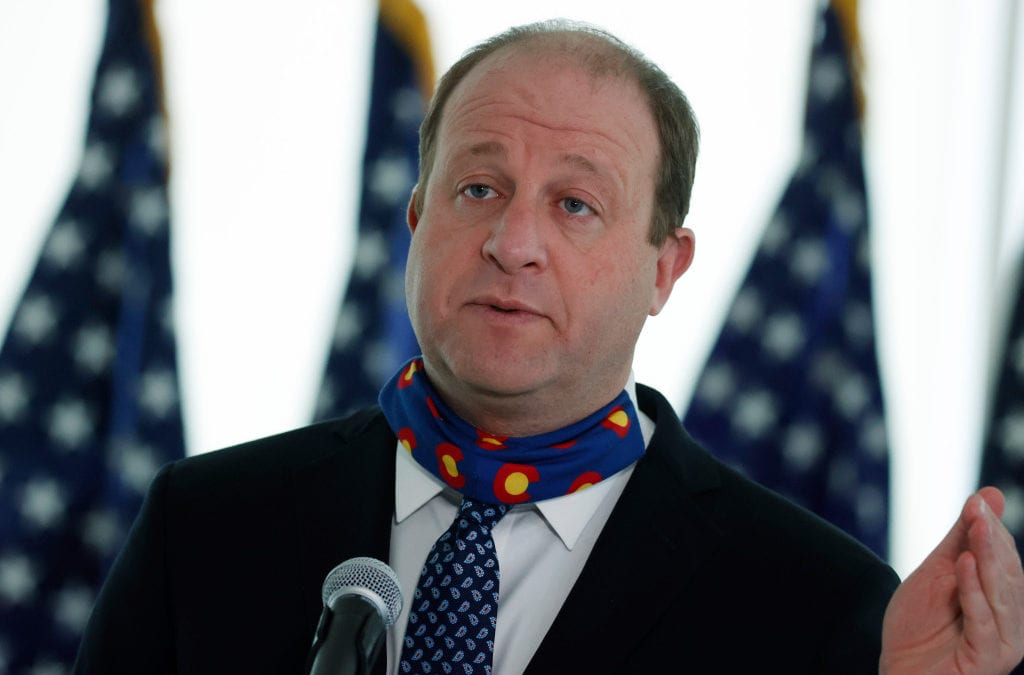 Gov. Jared Polis on Saturday hinted that Colorado remains on track to reopen some parts of its economy on April 27 after his statewide stay-at-home order expires.

“While growth of the deadly virus slows in CO, it’s a huge threat for a long time,” the governor tweeted. “By keeping distance from one another, wearing masks as we re-open over April 27th throughout May we can avoid mass deaths that exceed medical capacity AND devastating closure.”

In his tweet, Polis linked to a Los Angeles Times story which reported that fewer than half of Los Angeles County residents still have jobs as the pandemic has shuttered offices and prompted massive layoffs across a wide swath of industries.

The governor’s desires reflect a delicate push-and-pull state leaders are facing between saving a free-falling economy and preventing a spike in cases, hospitals from being overwhelmed, and ultimately more deaths. Multiple Colorado counties have expressed a desire to ease restrictions so people can return to work, while protesters plan to rally Sunday at Colorado’s State Capitol in Denver against what they call leaders’ “draconian” policies.

In a news conference Friday, Polis said Colorado is in the “tail end” of the urgent phase of the outbreak, and that he would provide more details Monday on the gradual reopening of nonessential businesses. It is unclear which businesses may be allowed to open first, and under what type of social distancing guidelines.

“I wish that relaxing restrictions was like turning a light switch on and off, and we can all go back to how things were,” the governor said Wednesday in a news conference. “But it’s going to look more like a dimmer.”

He warned Coloradans that even with some businesses able to open their doors again, levels of social distancing would be in place for the foreseeable future.

The governor’s tweet came hours before state health officials announced 411 people had died of complications related to COVID-19 — 20 more than announced the previous day — with more than 9,400 confirmed cases around the state.

There have been 1,797 people hospitalized since the outbreak entered the state last month, but only 843 people were in Colorado hospitals with symptoms of the illness as of Friday, state data shows. At least 230 people since Friday either went home or were transferred to a lower level of care, like a rehabilitation facility.

The number of outbreaks at nursing homes and other senior care facilities also continues to increase, with 107 confirmed as of Saturday afternoon. In light of these devastating outbreaks — which have been responsible for roughly half of Colorado’s new coronavirus deaths — Polis on Friday announced more oversight and called in the National Guard.

Another major question to be addressed is whether the state has enough testing and the ability to trace and quarantine those who contract COVID-19 and their previous contacts. State health officials have said mass testing is needed in communities to adequately track the virus’s spread, and experts have said contact tracing is a labor-intensive process that may require more health staff around the state.

The governor on Friday pushed back on comments made the previous day by Scott Bookman, the state’s COVID-19 incident commander, who told reporters, “The state won’t reopen until we have the capacity to make everyone safe.”

“If any state, if any country, were to wait until we could keep everybody safe,” Polis said, “we’d have to be closed forever.”

On Saturday, Eagle County — one of the first Colorado communities to be hit by the new coronavirus last month — said it is seeking partial relief from the governor’s executive order. In a letter to the state’s top public health official, Jill Hunsaker Ryan, county leaders requested permission to increase gatherings from zero to 10 people, permit conditional opening of nonessential businesses that can meet social distancing requirements, and open outdoor recreation facilities that would be able to limit gatherings to fewer than 10 people.

“Eagle County, our medical community, and county partners are prepared to take a step toward a more sustainable social distancing model, while taking a cautious and incremental step to open businesses and recreation that are currently restricted in these orders,” a county news release states.

Meanwhile, a county commissioner in Montezuma County on Friday said in a Facebook post that on April 26 the county would be open for business. The commissioner, Larry Don Suckla, did not provide any additional information, and without a statewide lifting of restrictions, it’s unclear what authority Montezuma County would have in unilaterally opening up businesses.

While growth of the deadly virus slows in CO, it’s a huge threat for a long time. By keeping distance from one another, wearing masks as we re-open over April 27th throughout May we can avoid mass deaths that exceed medical capacity AND devastating closurehttps://t.co/JLmHg1MQdw