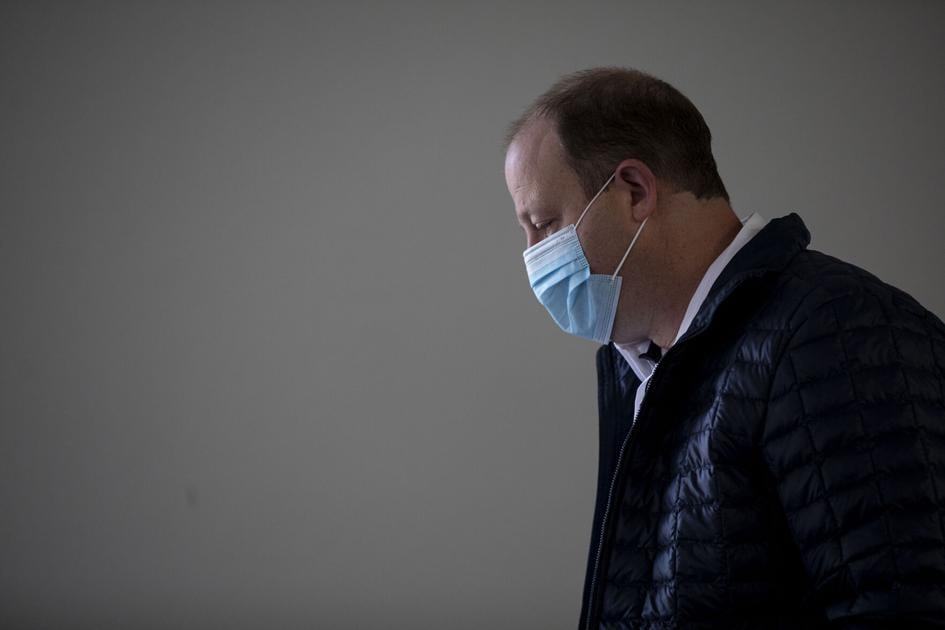 Colorado is set to “exceed all existing hospital capacity by the end of the year,” Gov. Jared Polis warned Tuesday, citing modeling as the seven-day average of COVID-19 cases hit an all-time high.

“This thing’s quick, and we need to change the way we live,” Polis beseeched during a news conference, imploring residents to stay home unless necessary, wear masks, wash hands and keep a social distance.

“Now is the time to shrink our bubble, to be more careful. We’ve got to get control over this in the next few days and weeks, heading into the holidays — heading into a time of so much hope,” he said, alluding to the promise of a vaccine. “We don’t want to squander that by easing up now.”

If Coloradans are heeding his advice, the data doesn’t reflect it. The state recorded 1,433 new cases Monday and 1,211 cases Tuesday after setting a high of 2,123 cases Sunday — more than double the springtime peak of 966 cases on April 23.

Nearly 650 Coloradans are hospitalized, with nearly 80% of intensive care unit beds across the state in use, as are nearly 40% of adult ventilators. Hospitalizations have steadily increased for nearly the past two months, he added.

As the state’s positivity rate — the percentage of positive cases among those tested — soars beyond the 5% cap recommend by the World Health Organization, officials are again looking at the “surge capacity,” which would allow it to add thousands of hospital beds in four weeks. The positivity rate in the state is approaching 7%, according to Polis.

That capacity will depend on the availability of personnel and supplies, Polis cautioned, adding that “many hospitals are already making plans to begin the call on increasing ICU beds.”

A spokeswoman for UCHealth, which operates Memorial Hospital Central and Memorial Hospital North in Colorado Springs, said Tuesday that there are “no immediate plans to implement our surge plan to expand ICU bed availability at UCHealth’s hospitals in the Pikes Peak region.”

“As you can imagine, though, UCHealth is watching hospitalization numbers closely, and the upward trajectory and current incidence rate are concerning,” spokeswoman Cary Vogrin said.

The hospital system is “not currently discussing making changes in regard” to elective surgeries, she added.

Other Pikes Peak area hospital operators, including Children’s Colorado and Centura Health, did not immediately respond to questions about capacity and potential plans to halt elective surgeries.

Mortality rates for COVID patients who enter the hospital dropped to 4% this month, down from upwards of 15% this spring, thanks to advances in care, Polis said.

Still, if you contract the virus and require hospitalization, “you have a 4 to 7% chance of not making it out,” he said.

Officials said Tuesday that five counties were being downgraded to stricter levels on the state’s COVID-19 dial, similar to a fire-danger dial in that it uses color to convey the likelihood of contracting the sometimes deadly virus and sets restrictions based on the incidence of the virus per 100,000 people over a two-week period. Arapahoe, Otero and Crowley counties will move to Safer at Home Level 2, and Denver and Adams counties will move to the stricter Safer at Home Level 3, officials said in a news release.

Safer at Home, in the middle of the dial, is split into three categories, with one being the least restrictive and three being the most. The Protect Our Neighbors designation offers the fewest restrictions, and Stay at Home is the most restrictive, which was mandated statewide this spring.

Polis has continued to not respond to questions about whether he would mandate another statewide stay-at-home order, saying only that local control is the best approach. On Tuesday, he pointed to a statewide order issued last week that limits gatherings to 10 people from no more than two households and said, “We do have a very strong statewide health orders. If people do a better job following these orders, we will contain the virus.”

Local control allows for the “right response at the right time in the right area,” he added.

Barbara Gould said she was healthy until contracting COVID on a flight last spring. The disease hospitalized her for 91 days where she spent 65 days on a ventilator and nearly lost her life, she said.

“My lungs were like concrete,” she recalled of the day she was admitted to the hospital.

Doctors eventually recommended her for life support, and “it was clear by then I was dying.”

Gould, now at home, continues to require oxygen and has struggled to relearn to walk, swallow and talk, she said. Her liver has sustained damage that might be permanent, her lungs are scarred, and “my family and I have PTSD that is overwhelming,” she said, adding that “my hair fell out, all of my hair.”

State officials displayed a picture of Gould from February showing her as a vibrant middle-aged woman with long, brown hair — a stark contrast to the Gould who appeared Tuesday, appearing frail and gaunt, with sparse strands of grey and white hair.

“I don’t recognize myself,” Gould said.

“I scarcely recognize you today,” Polis said to Gould, a friend.

“I never said, ‘Why me?’ because the answer is really, ‘Why not me?'” Gould said. “We just don’t know. It’s very important to be careful.”

Another COVID-19 survivor, nurse practitioner Kim Powell, said she was an avid runner, singer and drummer, the picture of health.

“I was essentially plucked from life as I knew it,” she said of her diagnosis late this spring, adding that although she was only hospitalized for two nights, she still requires oxygen for “anything more than a slow walk to the mailbox.”

“I haven’t been able to do many of the things that used to bring me joy,” she said. “I can’t run. I can’t go the mountains. I haven’t regained the stamina or grip to play my drums again. I can sing, but it’s exhausting and it really sounds terrible.”

Powell said she’s experienced lasting heart and lung issues and is unsure of what her future will look like.

“It’s affected every organ system in my body and every person in my life,” she said.