Polis: Colorado COVID hospitalizations up — mostly among the unvaccinated — pleads for people to get the shot 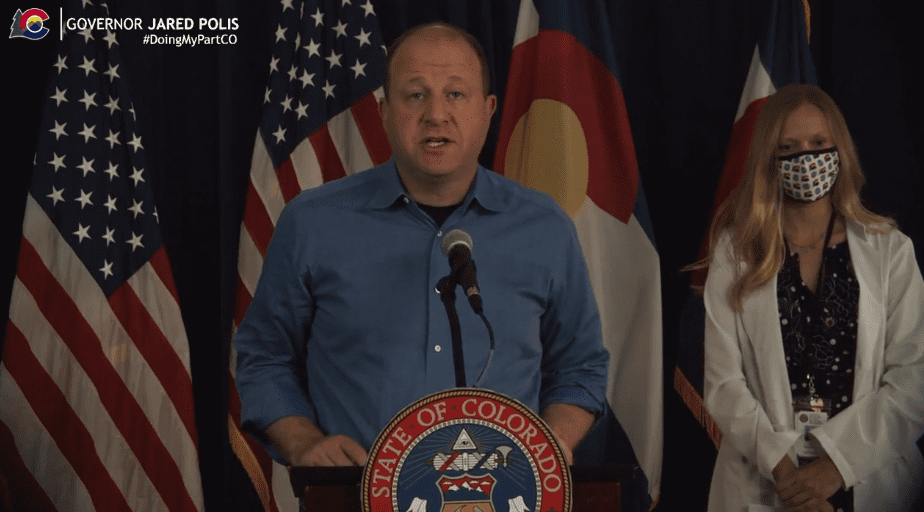 Drone footage taken on August 1, 2021 showing the extreme damage along I-70 Glenwood Canyon from heavy rain and flooding which occurred July 31

Just when Coloradans had hoped for a light at the end of the COVID-19 tunnel, the delta variant has thrown another curve at the state, according to Gov. Jared Polis.

Polis told reporters Monday that the state experienced a fairly big jump in the number of people hospitalized with the delta variant, from 358 on Monday, up from 270 last week.

“It’s not as bad as other states,” Polis said, but the data appears to show that this will get worse before it gets better.

That said, hospital capacity is not in jeopardy, and he does not anticipate a scenario where it will be anytime soon. Polis has said in the past that the state’s role for instituting COVID-19 measures has passed, now that the threat to hospitals has abated.

Polis did have some good news Monday: 70% of all eligible Coloradans, age 12 and older, are now fully vaccinated. For adults, the vaccinated population is at 72%. The goal, the governor said, is to get to 80%. In Denver, where the partial vaccination rate is ahead of the state’s, health officials said Monday that 70% wasn’t enough and couldn’t predict what threshold would be needed to better suppress the virus’s spread.

The pandemic is now one among the unvaccinated. He pleaded with people to get vaccinated.

“We’re all very tired of this virus, and we have a highly effective tool to combat it,” he said.

With the delta variant now spreading, there’s a new urgency around vaccination. The vaccines do work against the delta variant; even for those who are vaccinated and catch the virus, the illness is much less severe and hospitalizations are less dire.

Polis addressed his recent requirement that state employees be vaccinated by Sept. 20 or be tested twice weekly and wear masks.

“We want to model as a state what a safe workplace looks like,” Polis said.

Polis also addressed the recent news out of Israel that people are getting a third shot — a booster — to protect against the variant. He said he encourages the Food and Drug Administration to both review Pfizer’s request for a third dose and to fully approve the vaccines, which have been under emergency use authorization.

Polis was joined by state epidemiologist Dr. Rachel Herlihy, who said that over the last few weeks the state is seeing a 30% increase week over week in cases, which she called “dramatic.”

The increase is among unvaccinated people — five to six times the rate of infection for those who are vaccinated, she said. And that’s driving the increase in hospitalizations, she explained.

The state is seeing “breakthrough” cases of COVID among vaccinated individuals, but she said the vaccines are highly effective in lessening the severity.

The most effective vaccine among the three available is Moderna, Herlihy said, with less breakthrough cases among vaccinated individuals, followed by Pfizer and Johnson & Johnson. However, the state has seen a slight decrease in vaccine effectiveness, she said.

Most of the lower vaccination rates are in rural counties, and Polis said they are working with local partners, including county commissioners and public health officials, on how to reach their populations and get information to people from trusted sources, such as doctors, faith leaders and migrant leaders.

Without reaching that 80% vaccination rate, Polis predicted that hospitalization numbers could reach 700 or 800. “This is tough to face another peak when we thought the last peak was behind us. We do have the ability to reduce the peak by getting vaccinated.”

On the subject of masks, both Polis and Herlihy echoed the Centers for Disease Control and Prevention advice that people wear masks indoors. But it shouldn’t be a substitute for getting vaccinated, they said. In Denver on Monday, the top health official there said the city could not mask its way out of the current spike, which prompted the city to require a vast swath of employees across high-risk settings and occupations to be vaccinated.

“Masks do not reduce the severity” of the illness, Polis said.  “Get vaccinated to show you care for others.”