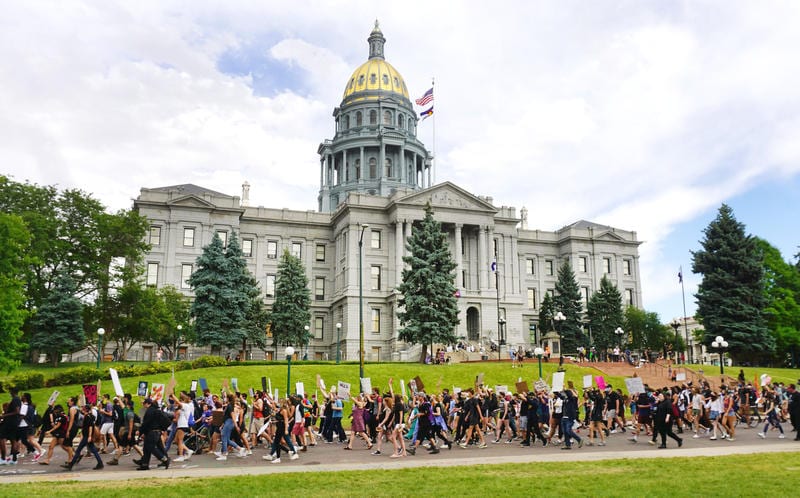 Protesters chanted “no justice, no peace,” “George Floyd” and “Black lives matter” as they marched past the Capitol building on Thursday.
Scott Franz/Capitol Coverage

As large protests against police brutality continue around the nation, Democratic lawmakers at the state Capitol are advancing a bill they say will help prevent deadly police encounters in Colorado.

Senate Bill 217 would require all police officers to use body cameras, outlaw chokeholds when arrests are being made and prohibit police departments from hiring officers who have been convicted of a violent crime or inappropriate use of force.

The bill also requires officers to intervene when another officer is using inappropriate force.

“Coloradans across the state are demanding accountability, transparency and increased integrity from our law enforcement officers,” Senate President Leroy Garcia, D-Pueblo, said Thursday during the bill’s first hearing. “We have heard them, and it is time for us to act in a meaningful way.”

As Garcia spoke, hundreds of peaceful protesters were at Civic Center Park in downtown Denver chanting “Black lives matter,” “George Floyd,” and “no justice, no peace.”

The protesters then marched past the Capitol building.

As Colorado state lawmakers consider police reforms at the Capitol, hundreds marching outside chant “no justice, no peace,” “George Floyd” and “Black lives matter.” This time lapse gives you an idea of the size of the march. #copolitics #coleg pic.twitter.com/eKbrx3JL8o— Scott Franz (@ScottFranz10) June 4, 2020

“They’re crying out for us to do something,” bill sponsor Rhonda Fields, D-Aurora, said at the hearing. “This is a defining moment for our nation. Nobody should have to die in the custody or at the hands of police. That’s just not the order of policing.”

After almost seven hours of testimony, a Senate committee voted along party lines to advance the measure. Republicans on the committee opposed it, saying it needed some amendments to make it more balanced and fair to police departments.

The bill is also getting a mixed reaction from law enforcement agencies around the state. For example, Douglas County Sheriff Tony Spurlock testified that some of the proposed changes are needed, but some of the restrictions would make it difficult for some police departments to operate.

Some officers raised concerns about the proposed body camera requirement and another provision about releasing footage from an incident within 14 days.

The full Senate is likely to consider the bill next week.