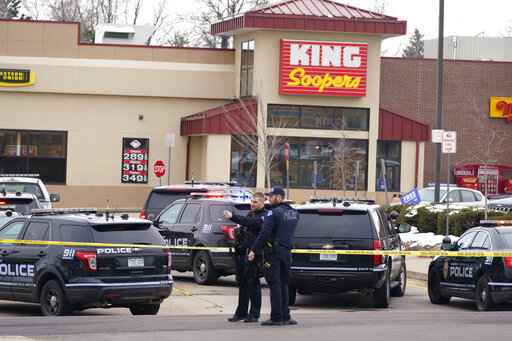 Yamaguchi said police were still investigating and didn’t have details on a motive for the shooting at the King Soopers store in Boulder, which is about 25 miles (40 kilometers) northwest of Denver and home to the University of Colorado.

Dean Schiller told The Associated Press that he had just left the supermarket when he heard gunshots and saw three people lying face down, two in the parking lot and one near the doorway. He said he “couldn’t tell if they were breathing.”

Video posted on YouTube showed one person on the floor inside the store and two more outside on the ground. What sounds like two gunshots are also heard at the beginning of the video.

Law enforcement vehicles and officers massed outside the store, including SWAT teams, and at least three helicopters landed on the roof. Some windows at the front of the store were broken.

At one point, authorities said over a loudspeaker that the building was surrounded and that “you need to surrender.”

One person was taken from the shooting scene to Foothills Hospital in Boulder, said Rich Sheehan, spokesman for Boulder Community Health, which operates the hospital.

Colorado Gov. Jared Polis tweeted a statement that his “heart is breaking as we watch this unspeakable event unfold in our Boulder community.”

Police had told people to shelter in place amid a report of an “armed, dangerous individual” about 3 miles (5 kilometers) away from the grocery store but said at the news conference later that it wasn’t related to the shooting.

The FBI said it’s helping in the investigation at the request of police.