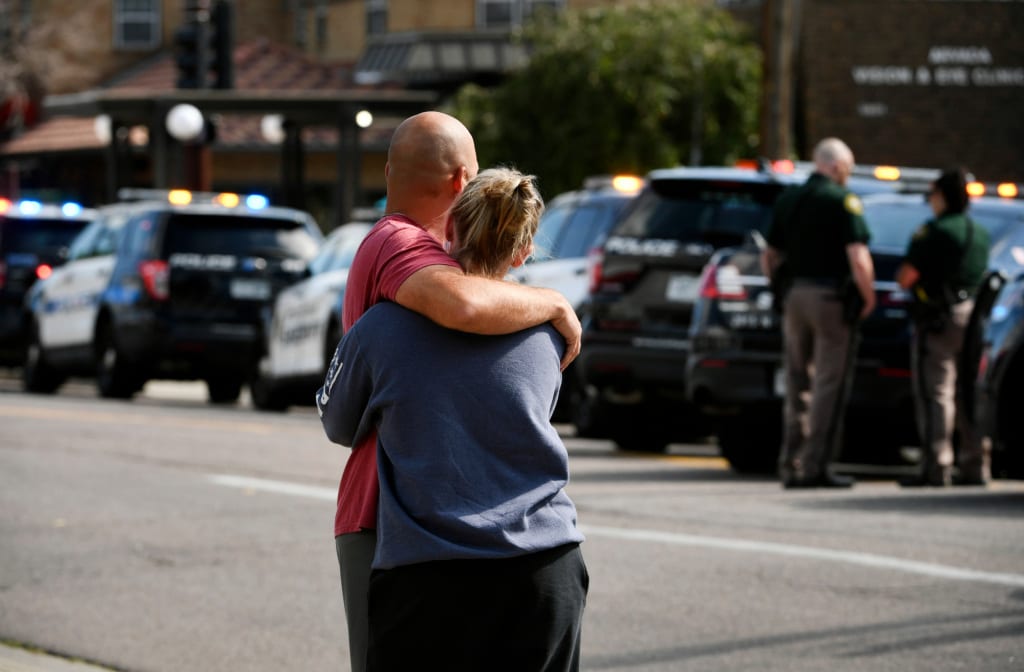 DENVER — A police officer who was one of three people killed in a shooting at a suburban Denver shopping district was ambushed by a suspect who previously expressed hatred toward police, authorities said Tuesday.

Arvada Police Officer Gordon Beesley “was targeted because he was wearing an Arvada police uniform and a badge,” police Chief Link Strate said at a news conference. “Officer Beasley was ambushed by someone who expressed hatred of police officers.”

Strate called it a “deliberate act of violence” and an “isolated incident.” But he did not provide details about the suspect, who also died in the shootout Monday; how authorities knew that the suspect had deliberately attacked Beesley; and how they knew about the suspect’s views toward police.

Strate also did not explain what started Monday’s shootout, which also killed a man authorities have described as a “Samaritan” near a library in historic downtown Arvada, an area that is home to popular shops, restaurants, breweries and other businesses about 7 miles (10 kilometers) northwest of downtown Denver.

Strate on Tuesday identified that man as John Hurley, 40, of nearby Golden. Without elaborating on what he did, Strate called Hurley a “true hero who likely disrupted what could have been a larger loss of life.”

The chief said there was no connection between Hurley and the suspect.

Arvada police spokesman Dave Snelling declined to say who shot the suspect, saying that would be something investigated by a team of area law enforcement officers.

The city of Arvada planned an evening vigil at Peace Lutheran Church just west of the Olde Town district.

Authorities said Beesley was a school resource officer with a reputation for taking a compassionate approach with students. With school out for the summer, Beesley was working on patrol when he was hit by gunfire shortly after a report of a suspicious incident that police also have not described.

Beesley was a 19-year veteran of the Arvada Police Department, working as a patrol officer and as a motorcycle traffic officer before being assigned to work with students at Oberon Middle School.

According to his school resource officer biography, he played the drums in a band and enjoyed hiking, biking, skiing, and camping with his family. His motto was “Look for the good in every day.”

While working at the school, Beesley tried to help students who got into trouble from being prosecuted with crimes and reminded them and their parents that they would get through any problems they had, school counselor David Ruppert said.

Beesley once convinced a student he worked with who did not want to go to school to get out of his car and attend classes, Ruppert said.

“The kids gravitated toward him. They looked at him as someone I can go to,” Ruppert said.

In 2015, Beesley began biking to school alongside a seventh grader with developmental delay after learning that he was really interested in bicycles but that his mother did not want him riding alone, according to a KUSA-TV story.

Ruppert was one of about 30 school staff members who walked from the scene of the shooting to the growing makeshift memorial for Beesley that was created outside the police department and city hall. Flowers were piled on top a police cruiser and bicycle festooned with U.S. flags and balloons.

The shooting in Arvada came three months after a gunman opened fire and killed 10 people, including a police officer, at a supermarket in Boulder, about 20 miles (32 kilometers) northwest of Arvada.

After Beesley was killed Monday, about 100 people — some holding American flags and pro-police flags — gathered as procession of police cars and motorcycles escorted the hearse carrying Beesley’s body to the coroner’s office.

Among them was Elaine Magnuson, who choked up as she watched. She originally thought the huge police response in the area indicated that a car accident might have happened — not a shooting that killed a police officer.