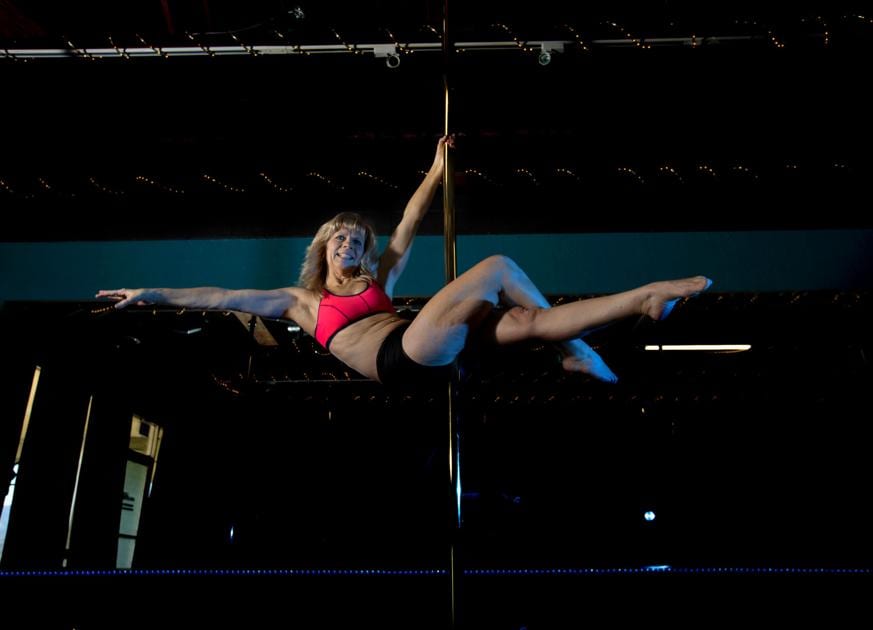 A few months before her 50th birthday, Diane Martin pulled aside her adult daughters to tell them a secret. It felt like a naughty secret.

She told them something she couldn’t tell just anybody at the time: Martin had started pole dancing for exercise. And, she loved it.

“I just loved it from the very beginning, from my very first spin,” Martin said.

Finding “pole,” as she calls it, proved life-changing for Martin. She went on to help start a movement in Colorado Springs, transforming lives and perceptions along the way.

But it was tricky back in 2008. Pole wasn’t respected as a sport or a way of self-empowerment. It was seen as what happens at a strip club.

“At the time, you were careful who you tell and how you tell it,” Martin says. “It was something really taboo. Some people still see it that way.”

The judgment was especially harsh for someone such as Martin, an ordained minister. Sure, she wondered what people at church would think about their pastor’s hobby. But that wasn’t going to stop her.

Because throughout Martin’s life, she had learned a hard lesson: to stop caring about what people think.

Alyvia Hildebrand is reflected in a mirror as she practices pole techniques during an intermediate pole fitness class at Pole Revolution in Colorado Springs on Thursday, feb. 11, 2021. (Chancey Bush/ The Gazette)

A new way of life

Earlier in her life, Martin wasn’t one for venturing outside comfort zones. Just think about her as a 19-year-old. Just married. Just starting to attend her husband’s Pentecostal church, where women were told not to go to college or speak up. She decided to leave the church 13 years later. And leave that man four years after that.

As one of her first acts as a single woman, the 36-year-old enrolled in seminary school. Maybe she was trying to prove a point.

“I sort of thought that would seem countercultural to them,” she said, speaking of her former church. “Because I had never seen a female pastor.”

Joelle Colella practices pole techniques during an intermediate pole fitness class at Pole Revolution in Colorado Springs. Pole has been recognized as a sport by the Global Association of International Sports Federations. Lifting, holding and spinning the body requires, according to the federation, “great physical and mental exertion, strength and endurance.” Also, “a high degree of flexibility is needed to contort, pose, demonstrate lines and execute techniques.”

That became her new way of life, forging unfamiliar paths.

When she took her first pole class, at a dance studio in Colorado Springs, she was 20 years older than the other students and slower to learn. She had to repeat the first level when everyone else passed.

“It can be demoralizing to feel like you’re behind everyone else,” she said. “If I hadn’t loved it so much, I would’ve quit.”

Martin wanted to spread the love, without the pressure, so she started teaching pole classes out of her basement. Her 20-something daughters were among her first clients.

Interest grew enough that she opened a small studio called Pole Revolution, or Pole Rev for short, in 2011. The name’s a nod to Martin’s other profession as a reverend.

“And that it revolutionized my life,” Martin says.

It did the same for Krista Mauss, who walked into a Pole Revolution class in 2016. She’d been taking pole classes in Seattle as a way to stay in shape during college.

“For a lot of women, we have a hard time finding fitness that’s fun for us,” says Mauss, who played rugby and was a cheerleader in high school.

“It kind of became an obsession,” Mauss said.

She began researching the history of pole as a sport, which she learned started centuries before pole dancing sprung up at strip clubs.

Some major players in sports have noticed. Pole has been recognized as a sport by the Global Association of International Sports Federations, or GAISF. Lifting, holding and spinning the body requires, according to GAISF, “great physical and mental exertion, strength and endurance.” Also, “a high degree of flexibility is needed to contort, pose, demonstrate lines and execute techniques.”

And pole is under review to be an Olympic sport in 2024.

Mauss and Martin say that would be a game-changer in normalizing what they do.

“That would help people take it seriously,” Mauss says. “Which they should.”

Alyvia Hildebrand, a 23-year-old software engineer, remembers feeling “extremely nervous” before her first pole class a year ago. When she saw more experienced dancers, she thought, “How am I ever going to do that?”

“It’s very intimidating when you don’t know what you’re doing,” she said. “You have to remember everyone starts at the same level. Now, I can hit some moves I never imagined I could hit.”

Five years into the sport, there are moves Mauss still can’t do. But she has plenty of passion, which Martin, who is now 61, quickly saw. That’s why Martin wanted to pass on her business to Mauss, who has owned Pole Revolution since 2017.

“Krista really stepped up,” said Martin, who has stayed on as an instructor. “She’s taken it where I knew I couldn’t.”

During her classes, Mauss sees a group of women, and some men, uplifting each other. When someone gets a new move, the room erupts into claps and cheers. Often, they all forget how hard they’re working their muscles because of the fun they’re having.

“I see a massive increase in confidence,” she said.

“You see it in the way people carry themselves. They feel strong. They feel beautiful.”

That’s the legacy Martin has left. She’s been happy to watch the sport grow in just 13 years. And to see how it’s helped people.

“The reward, for me, is helping other women find their own self-esteem again,” she said.

Finding pole, she says, helped her find that love for herself. It helped her heal. Most recently, it helped her make another big change in her pastoral life.

For most of her ministry days, she was part of a mainline Christian denomination. In those church spaces, she didn’t share much about pole dancing.

“There were still people who would judge me or never were comfortable with that piece of my life,” Martin said.

And she was tired of hiding it.

She found a local church, part of the Metropolitan Community Church, which Martin says is “all about total love and acceptance.”

The denomination is perhaps best known for applying that acceptance to the LGBTQ community, which Martin pointed out.

“I’m straight, by the way,” she says. “I just identify with people who have been oppressed in some way.”

Martin joined that church’s staff in November. Now she shows co-workers videos of pole moves and they say, “You go, girl.” Now she can proudly talk about pole dancing in a sermon.

Like, when she makes a metaphor about a common pole move called “the stag.”

“You can do this position with your torso just kind of upright,” Martin says. “But if you lean into it, if you lean forward into it, that’s when it really works.”

She keeps talking, drawing from everything she’s been through.

Staying true to herself hasn’t always been easy. But she keeps trying.

“If you’re really wanting to move forward in your life and in your spiritual journey, you have to give it some extra effort,” Martin says.

“If you want to overcome the obstacles and get past them, you have to lean into it.”