“Please Don’t Let Me Die”: Colorado Woman Hog-Tied, “Tortured” By Cop In Back Of Patrol Car During Transport For Over 20 Minutes (Video) » Sons of Liberty Media 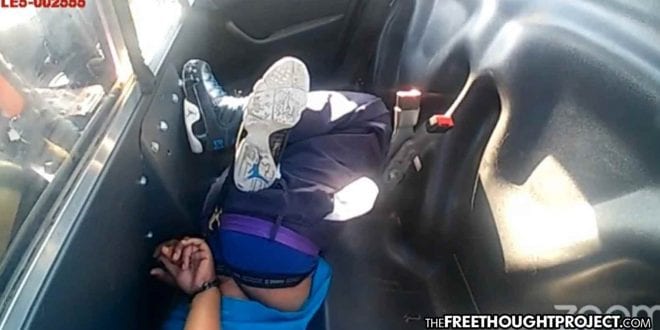 Aurora, CO — A video released this week was so disturbing that even Aurora Police Chief Vanessa Wilson is speaking out about it, referring to what happened to a woman in it as “torture.” One of the chief’s now-former officers hog-tied a woman, Shataean Kelly, 28, before taking her on a “punishing” 20 minute ride during which she nearly died.

The incident happened last year and ended with the firing of Officer Levi Huffine. Since he was fired, the officer has been fighting for his job back, something that the chief says will not happen but something that readers of TFTP know happens all too often.

“In my opinion she was just tortured back there. It makes me sick,” said Wilson after watching the video again Tuesday, during a civil service commission appeal hearing for Huffine, attempting to get his job back. “We are not judge, jury and executioner,” said Wilson. “We are not to treat people inhumanely like they don’t matter.

“And he is lucky she did not die in the backseat of that car. Because he would be — in my opinion — in an orange jumpsuit right now,” said Wilson.

After watching the video, we here at the Free Thought Project think that even though Kelly did not die, Huffine should be in an orange jumpsuit anyway.

According to police, Huffine arrested Kelly because she was allegedly involved in a fight. However, the DA declined to uphold any of the charges brought by Huffine.

While Kelly was in the back of the police cruiser, Huffine accused Kelly of trying to escape — an impossibility as police back seats cannot be opened from the inside — and then hog tied her.

Wilson testified in Huffine’s hearing to the fact that the doors are inoperable in the backseat. She called the hog tying of Kelly an act of punishment.

“The hobbling in my opinion was another form of punishment,” said Wilson.

Indeed, it was punishment. Even after Kelly fell face down in the back of the cruiser and was at risk of positional asphyxiation, Huffine completely ignored her pleas for help. Kelly was so terrified that she was going to die that her pleas for help turned to begging, and eventually helpless self defeat.

“Officer please, I can’t breathe,” says Kelly as she is upside, hog tied and unable to move. “I don’t want to die like this. I’m about to break my neck,” cries Kelly.

“My neck is killing me dude. Help me, I can’t breathe.”

At one point Kelly can be heard saying, “I never felt so much racism in my life.”

Wilson said she was particularly struck at how panicked and desperate Kelly seemed to be at one point, saying, “I beg you master.”

Imagine being so afraid that this monster was going to kill you that you resort to calling him “master.” That is exactly what happened to Kelly and the chief finds it utterly disgusting, and rightfully so.

“As an African-American female she denigrates herself to the point she actually calls him ‘master.’ To me that is disgusting,” said Wilson.

When Wilson found out about the officer’s actions that day, Huffine’s case was referred to the Chief’s Review Board who recommended an insultingly low 180-hour suspension. The chief overruled this suspension and moved to fire this torturing cop.

Huffine appealed his firing and now, Aurora’s four member civil service commission will issue a written ruling either upholding the Huffine firing, or potentially giving him his job back with a lesser penalty. If history is any indicator, he will likely be reinstated with full back bay.

“If that doesn’t make you sick watching that video, I don’t know,” said Wilson.

“It’s beyond human decency for me,” said the chief. “It’s unacceptable. I don’t know what else to say.”