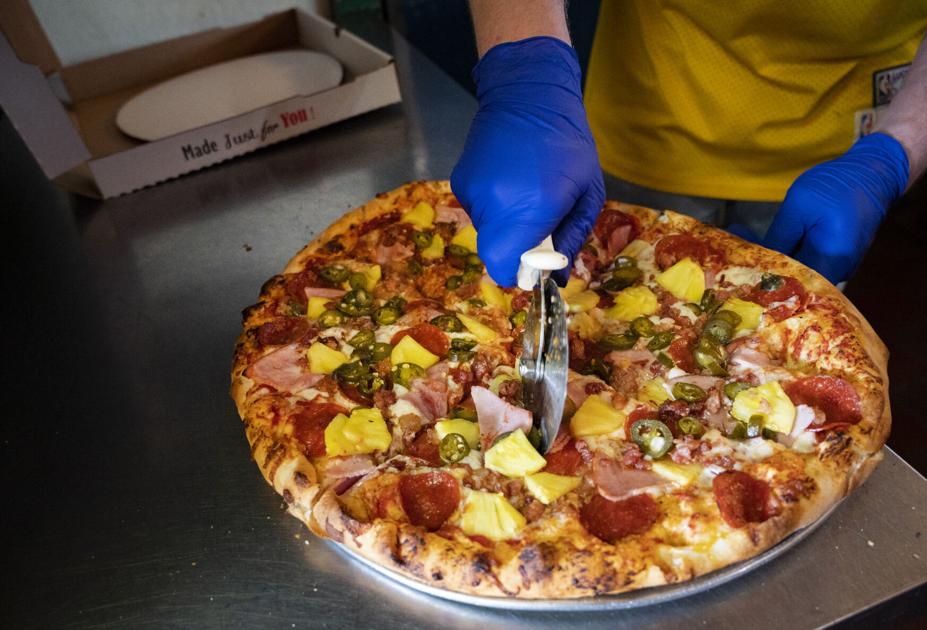 LEADVILLE • Stand close enough to Vicki Koch and you’ll be sprinkled with flour. That is, if you’re in the kitchen when she’s making pizza dough for the second time that day. Her muscled arms create a faint cloud of white as she stirs.

Never mind the flour dust. You’ll want to stand close enough to hear Koch talk about the pizza joint she and her husband, Tim, have run for 17 years.

There, you can see her pizza socks. And hear her tell the story of the “Crocodile” pie, listed as Leadville’s favorite on the menu.

A bunch of students at nearby Colorado Mountain College started the trend. Groups of them started ordering pizza with red sauce, bacon and cream cheese.

She ran with it, adding a barbecue-sauce base, jalapeños and shrimp. It’s one of nine “favorites” on the menu, alongside the option to create your own New York-style pizza. Another one is called “Bacchanalia,” which is named after a Roman festival and, according to a Google search, also means “drunken revelry.” It’s basically a cheese plate in pizza form, the owner says, topped with spinach, salami and roasted red grapes. Other unique toppings include avocado, braised pork, smoked trout and dried fig.

It’s all at High Mountain Pies, which the couple opened in 2003 after Tim moved on from culinary school and other chef jobs. They’ve made sure the pizza joint has lived up to its very Colorado name. Hundreds of pizzas are made each day inside the little bright blue house on Fourth Street and just off the town’s main strip. There’s often a line wrapped around the building.

“We make food with love and integrity,” Vicki said. “If you’re friendly to people, their food tastes better.”

Oh, and they make ribs, simply because Tim “does them really well,” his wife said.

“They fall off the bone,” she added.

Tim’s philosophy is one of buying high-quality ingredients and fresh meats, such as chicken wings that have never been frozen. He and his wife work side by side everyday, but he describes Vicki as the “heart and soul” of the place.”

“You’re making people happy, one after another,” she said. “That’s why you come back to work after the hard days.”

Some of the hardest days coincide with events such as the Leadville 100 Trail Run. Runners and spectators alike order from the only pizza place in town. Leadville 100 participants have been known to fuel up on High Mountain Pies during the race.

Even amid the coronavirus pandemic, High Mountain Pies is still a happening spot. Its backyard patio hosts live music on summer weekends, and tourists visit after hiking nearby fourteeners Mount Elbert and Mount Massive, Colorado’s highest peaks. In December, they put up an outdoor “ice dining room” surrounded by snow.

It all keeps them busy. But that’s nothing new.

“We opened for the first time at 3 p.m. with three people working,” Vicki said. “We’ve been busy pretty much ever since.”