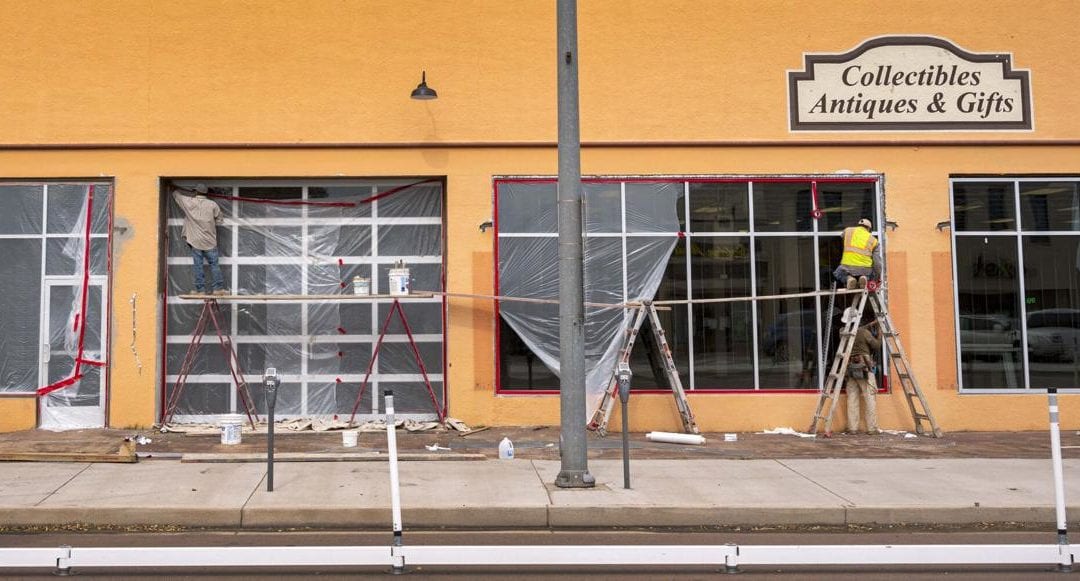 Downtown Colorado Springs’ southwest side and new south end have evolved into development hot spots over the last several years, where hotels, apartments and other projects have pumped hundreds of millions of dollars into the areas.

Now, it’s Pikes Peak or bust for the next round of downtown development — Pikes Peak Avenue, that is.

Roughly five blocks of the corridor, stretching east from Nevada Avenue in downtown’s core to Prospect Street, have become the latest focus of real estate companies and investors looking for development and redevelopment opportunities.

Among projects planned or under construction along the corridor: two apartment complexes totaling nearly 540 units; a loft/condo development; the conversion of a former retail building into mixed uses; the remodeling of another building into a food hall and office space; and a multi-story, mixed-use building eyed for residential and commercial uses.

“Everybody’s attention has really been on southwest downtown and the new south end where there have been new projects that have been completed, like the Trolley block (restaurants and bars), like the Olympic Museum, like The Mae on Cascade apartments, and Casa Mundi (apartments),” said Alex Armani-Munn, economic development specialist for the Downtown Partnership advocacy group.

“But all the while, I’ve been telling folks that what’s happening on Pikes Peak, between Nevada Avenue all the way down really to the (former) Gazette and St. Francis property (at Prospect Street) is really, really exciting.”

Pikes Peak Avenue has been a signature street in the Springs’ 149-year-old history.

Founder Gen. William Jackson Palmer drove the first stake at Pikes Peak and Cascade avenues and laid out Pikes Peak as the city’s “main street” that “would line up with the majestic view of the mountain that dominates the landscape,” according to the 2016  Experience Downtown Colorado Springs master plan completed by the city and the Downtown Development Authority.

That master plan identified the development of Catalyst Campus, a space and technology-focused business park at Pikes Peak and Colorado avenues, and the planned redevelopment of the former St. Francis and Gazette properties at Pikes Peak and Prospect, as helping to provide momentum for the corridor “that can be captured to create a creatively and economically diverse hub of new businesses and residents.”

A 320-unit complex, to be called Elan at Pikes Peak, has been proposed northeast of Pikes Peak and Wahsatch avenues by Greystar Real Estate Partners of Charleston, S.C. Meanwhile, the 217-unit Pikes Peak Plaza is planned northwest of Pikes Peak and Prospect by Denver developer Taylor Turano, in partnership with longtime Springs developer Jeff Dunn and son Ryan Dunn of Denver.

Pikes Peak Plaza is targeted to open in 2022, and Elan at Pikes Peak would follow a year later; their combined densities will help spur additional development along the corridor, Armani-Munn predicted.

“This is sort of a great microcosm of the evolution of urban development,” he said. “You always lead with that residential. Once we have that residential, then I think you’ll start to see again even more street-level businesses, more retail, more bars, more restaurants.”

Other factors also are driving development along Pikes Peak, said Armani-Munn and several business people, including those who are launching projects along the corridor.

In general, they say, developers and investors have been attracted to downtown because of the Springs’ strong pre-pandemic economy, its population growth and the desire by many people who want an urban lifestyle that allows them to live downtown and walk to restaurants, coffee shops, entertainment and the like.

When they look to Pikes Peak Avenue, developers see one of the few remaining downtown areas with large parcels available to purchase, assemble and build on, Armani-Munn said. Downtown Denver is largely built out; property that’s available is expensive and obtaining zoning and other entitlements can be a lengthy process, he said.

Multi-family developers, meanwhile, see the strength of the housing market citywide as a sign of Colorado Springs’ overall growth and potential for downtown, Armani-Munn said.

Greystar plans to buy parcels occupied by a vacant U.S Bank building and drive-thru and the Pikes Peak Post 4051 Veterans of Foreign Wars. The company has said in documents submitted to city planners that it will raze the buildings to allow for construction of its apartment project; last month, Greystar received an OK for its project from the Downtown Review Board, a city panel that reviews development applications.

“Even when developers see the rate of single-family home construction going on throughout the city and they see how quickly these homes are selling, even if they’re a multi-family developer, that signals to them that people are moving here, talent is moving here and that ultimately leads to businesses moving here,” Armani-Munn said.

In 2017, Springs businessman Rich Guy bought most of the property at 415 E. Pikes Peak that houses the four-story Pueblo Bank & Trust building. Its two upper floors had been vacant for many years; Guy converted the fourth floor into nine residential condominiums, has sold five of the units so far and expects to sell a sixth this month. He’s preparing to remodel the third floor for the same purpose.

Guy has a track record of successful downtown real estate investments. Years ago, he bought properties along South Tejon Street with the expectation that downtown would grow in that direction. He was right; South Tejon has become a thriving restaurant and nightlife hub that anchors downtown’s new south end.

Now he’s bullish on Pikes Peak Avenue because of its growth potential and the presence of other developers who also have their eyes on the corridor, Guy said.

owns the former St. Francis Hospital and Gazette buildings and is looking at them as possible apartments and commercial space, respectively.

To the west, Nor’wood owns the south half of the City Auditorium block, which fronts Pikes Peak and where the company for years has envisioned a multi-story, mixed-use project.

“I knew this was the next corridor that could redevelop, and Nor’wood owning the properties that they own just made it more likely,” Guy said. “They’re a major player. I guess it’s a hunch, but I calculated that this is probably the next big area to be developed and I was able to buy some property for not very much.”

For its part, Nor’wood’s plans for its properties remain on the drawing board and nothing is imminent, said Jeff Finn, a company vice president. Nevertheless, Nor’wood likes the energy that’s building along Pikes Peak as the two apartment complexes and other projects take shape, he said.

East Pikes Peak Avenue’s proximity to downtown’s core makes it appealing; renters will be able to walk or bike to restaurants and bars a few blocks away along Tejon Street, Finn said.

At the same time, the corridor extends east to connect with the Shooks Run neighborhood and the Shooks Run Trail — “a great amenity” that makes up the eastern boundary of the 10-mile Legacy Loop trail network that encircles downtown, he said.

Public improvements made in recent years along Pikes Peak through downtown — including upgraded streetscapes, new bike lanes, a narrower right-of-way and enhanced parking — also will get the corridor noticed by developers, Finn said.

“Not just our city, but it’s in most cities that private investment follows public investment,” Finn said. “And there was a significant public investment that was made along Pikes Peak in the reconstruction of that street from Nevada to the intersection of Colorado and Pikes Peak.”

Those improvements along Pikes Peak also will make it easier for renters and other nearby residents to walk or bike along the corridor as they head into downtown’s core, Armani-Munn said.

He’s turning the 18,000-square-foot building into a mixed-use project; one-third of the building is being leased for an event center, while Robertson says the rest of the space could house restaurant and retail uses.

While Robertson said he was intrigued by the opportunity to transform the building, he also liked Pikes Peak Avenue’s promise, the bike lanes, parking improvements and other projects taking place in the area.

“The Downtown Partnership, the city has kind of looked at that as the eastern gateway into Colorado Springs,” Robertson said. “Eventually, (Nor’wood) is going to do something with the old St. Francis and Gazette buildings. I think that corridor is just going to all tie together.”

Another major factor in Pikes Peak Avenue’s favor: it’s home to key employment hubs, such as Catalyst Campus. Telecommunications giant CenturyLink and Kinder Morgan, an energy firm, also have a presence along or near Pikes Peak.

Combining those employers with the apartment projects planned for Pikes Peak will drive development of restaurants, brewpubs and other businesses along the corridor, said Kevin O’Neil, whose O’Neil Group developed Catalyst Campus and who owns other nearby properties.

“It’s the snowball that’s running down hill,” O’Neil said of Pikes Peak Avenue. “Once you get it going, it’s very important that the critical mass is happening…

That is very important to us, to create an ecosystem on the east side of downtown, where, when my employees and other people’s employees, when they want to do lunch, they want to do a beer, they want to have activities, that Tejon isn’t the only place that we can enjoy ourselves.”

Some of those breweries, restaurants and the like already are in the works.

Mash Mechanix Brewing hopes to open before year’s end in a century-old building at 429 E. Pikes Peak that’s being remodeled by business owners Leif Anderson, Ryan Close and Kevin Olsen. They’re leasing the building from Guy, where they’ll have an on-site brewery, tap room and occupancy for more than 80 people, Anderson said.

The owners didn’t necessary want to be on Tejon, where competition is stiff among bars and breweries, Anderson said. Instead, they sought a location off the beaten path — still in downtown, but away from the core, he said. They were optimistic that development would gear up along Pikes Peak, but didn’t know Greystar was coming with its 320-unit apartment project across the street from their building.

“That is exactly how we wanted it to work out, but we didn’t expect it to happen this quick,” Anderson said. “We didn’t expect or know about all the apartments going in. … We kind of gambled. We didn’t know if it was going to be in two years, like it’s panning out to be, or if it would be eight years or 10 years. We didn’t know. But we really liked the building and the location and so we went for it.”

Owner Phill Bragg describes 1350 Distilling as an upscale cocktail lounge and manufacturing facility for distilling whiskeys, bourbons, vodkas and gins. A retired Marine, Bragg named his place after the 13 stripes and 50 stars on the U.S. flag; it has a private event room, retail space, a production area and offices.

Business was good before the COVID-19 pandemic, Bragg said, and employees who work at the nearby Catalyst Campus have been a primary demographic served by his business. Up to now, there haven’t been a lot of places for people to frequent on the east side of downtown, he added.

With the new apartment complexes planned for the corridor and the nearby Shooks Run neighborhood and trail, “there’s a nice convergence” of factors in the area, Bragg said. And now that the U.S. Olympic & Paralympic Museum has opened and other projects are gobbling up downtown’s southwest and south side, the east side “is pretty much the only way to go,” he said.

“What we’re hoping is that we kind of create kind of an alternate area that people can come to and that’s significantly different than kind of your typical establishments on Tejon,” Bragg said. “But also just to support the local neighborhoods because the neighbors around here, there’s really nothing supporting those neighborhoods except for us. We’re excited. We think we’re in a great spot. We love where we’re at.”