Philanthropic angels rescue some Colorado arts groups, but most still struggle under the pandemic 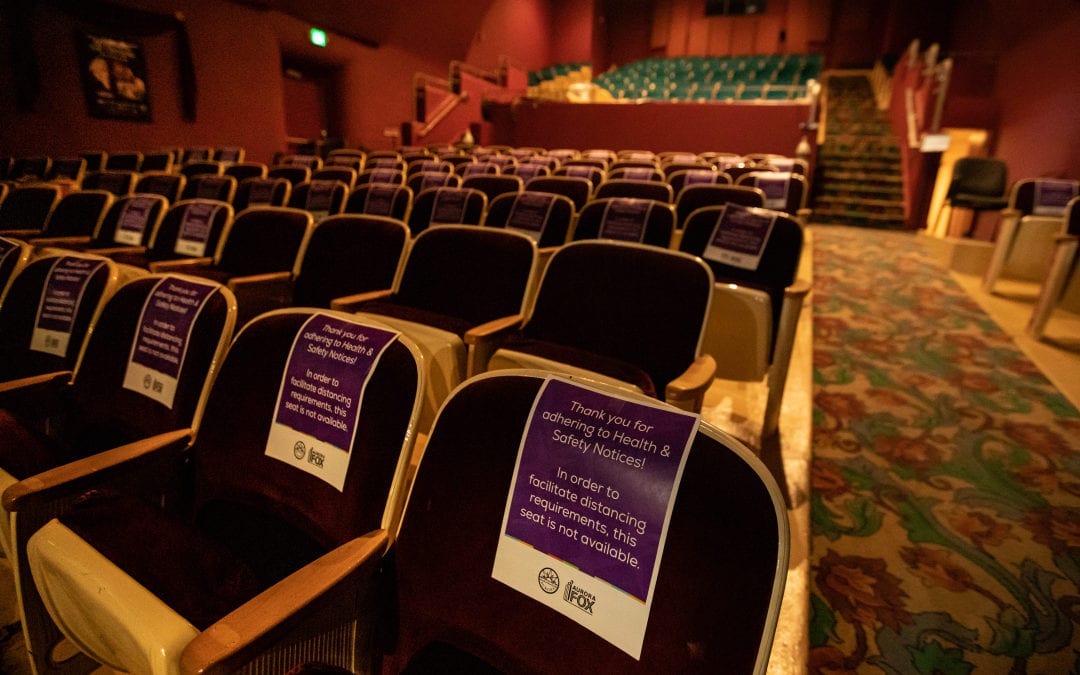 Everyone dreams of an angel, especially arts groups, especially during a pandemic — a generous patron to ease the financial hardships of the coronavirus crisis. So far, the best angel stories come from the Colorado Symphony and Colorado Ballet.

An anonymous donor gave the symphony a $2 million gift this month that will keep its musicians and staff going through June 2021, with continued full health care benefits, despite the fact that the orchestra cannot perform live.

Colorado Ballet likewise reports that in the first half of this fiscal year, it got two significant anonymous gifts, “a substantial boost” toward reaching its Relief and Recovery fundraising goal of $3 million.

Everyone could use a boost as the pandemic approaches the one-year mark and theaters remain dark, seasons are canceled and artists are out of work.

But artists and arts organizations are still scrambling. The performing arts have been hit even harder than the visual arts, since galleries and museums can at least schedule timed admission, operating at 25% capacity per the state’s public health order. Still, the outpouring of support from patrons would seem to signal the importance of Colorado’s normally thriving arts and culture sector.

There is much evidence of continued pain. The second round of the Bonfils-Stanton Foundation COVID-19 Arts & Culture Relief Fund applications closed this week. There were 113 proposals submitted with a total request of more than $3.2 million. That’s “well beyond the fund’s capacity (roughly $700,000 this round). So there’s still a significant need for relief funding and support to adequately plan for a return to in-person artistic offerings,” grants director Gina Ferrari said.

Chrissy Deal, also on the grants team at Bonfils-Stanton Foundation, added that, in speaking with Community ACTS Fund grantees, a culturally diverse group, “it is clear they are all still very much in survival mode and trying to be as innovative and flexible as possible on shoestring budgets, while facing ongoing operational challenges.”

Nationally, financial losses to nonprofit arts and cultural organizations due to COVID-19 are estimated at $14.8 billion, according to a report this week by Americans for the Arts. And that doesn’t begin to count ancillary audience spending at local businesses, restaurants, lodging, parking and the rest. The report found 63% of artists have become fully unemployed. They expect to lose an average of $21,500 each in creativity-based income in 2020 ($50.6 billion nationally).

In Colorado, about a third of creative sector jobs had been lost to layoffs, furloughs or elimination, according to an impact study last fall by the sales-tax funded Scientific and Cultural Facilities District. For 60% of those workers, the earned revenue loss has been significant to near total.

One lasting result of the pandemic: Online, digital presentations, classes and lectures may be a prominent part of the arts scene going forward, in addition to whatever shows can occur in person. But arts groups have yet to find a reliable way those efforts can be monetized.

“The online option is providing a respite — a beautiful performance or a guitar lesson for your kid — to help us see beauty in the world,” SCFD executive director Deborah Jordy said. Notably, when the Museum of Contemporary Art Denver and DCPA’s Off-Center moved the popular “Mixed Taste” lecture series to the web, it drew audiences from around the world.

The Museum of Contemporary Art estimates current fiscal year attendance is 49% lower than last year. But combined, in-person and virtual visits is near 90% of last year’s overall attendance.

Expect more hybrid efforts in the future. “Online has opened up a larger audience and has broken down some inequities,” Jordy said. “There’s going to be room for both.”

There are some encouraging signs. “There is definitely growing optimism for a robust return to in-person performances and programming,” said Ferrari, the Bonfils-Stanton grants director.

The glass half-full: Not a single one of SCFD’s 300 member organizations across seven counties has yet permanently shuttered, Jordy said, “which I think is extraordinary.” Like the rest of the philanthropic community, SCFD is wondering what life will look like post-vaccines. “That said, everyone’s under tremendous financial duress,” Jordy added.

Organizations have been in constant flux, planning for contingencies based on health orders since last March: social distancing, outdoor events, small-scale productions. They continue to think through different options.

SCFD’s Jordy reports funding has been higher than anticipated.

“SCFD funding is an incredibly important piece in the funding for organizations, the beauty of it is its consistent year-to-year funding for general operating. For 2020  SCFD projects it will grant and distribute $60 million,” Jordy said. “That’s not bad.”

As vaccines become available, openings and start dates are penciled in for spring/summer. The hunger for a crowd experience is palpable.

Ferrari noted “growing optimism for a robust return to in-person performances and programming.” For instance, Wonderbound’s recent in-person production, “Winterland: A Discotheque Cabaret,” sold out within weeks of its announcement. The dance company is now selling tickets for another in-person show.

Philip Sneed, president and CEO of the Arvada Center for the Arts, is optimistic about opening indoor theater starting in the spring, “depending on if and how we can meet requirements of our various unions as well as our state and local health departments.”

Sneed fully expects livestream programming to continue at his and other arts organizations.

“We’ll soon be announcing a slate of virtual programming, both live and recorded live,” he said. “We’re calling it our Digital Hub, and patrons will be able to purchase a full package, or choose individual offerings…It remains to be seen whether we can grow those revenue streams, and by how much. We’ve all realized that the entire planet is a potential market — but also that every arts organization on the planet is also our competition.”

And that doesn’t include Netflix, Amazon and other outlets.

Bonfils-Stanton Foundation CEO Gary Steuer praised Lighthouse Writers Workshop and Swallow Hill for having done a great job of pivoting classes to online, maintaining their work, teaching staff, and tuition revenue. Swallow Hill, however, was also very dependent on revenue from public performances at their own venue and at partner venues like the Denver Botanic Gardens, he said, “and that loss has been very difficult to make up.”

So far Denver’s tiny Betsy Stage announced it won’t be back after a decade on the scene. Who else might yet succumb to pandemic economics?

Symphony, ballet, theater and opera-lovers have come through: “Audiences, donors, and philanthropic supporters have given back in record numbers, helping the Colorado Symphony Association to an end of year giving campaign success story, the likes of which the organization has never seen before,” spokesman Nick Dobreff wrote on the symphony’s website.

The Denver Center for the Performing Arts had predicted a loss of $46 million in revenue last year. But donors have chipped in.. Suzanne Yeo, director of communications and cultural affairs, said via email, “much like our friends at the Symphony, Opera and Ballet, the DCPA continues to be amazed at the overwhelming support of our audiences. We launched our recovery fund in March 2020, and to date, we have raised more than $2.6 million toward our $4 million goal.” That will allow DCPA to extend health care benefits to furloughed staff and reopen its theaters when it’s safe to do so.

DCPA does not anticipate live, large-scale performances to resume until August with “My Fair Lady,” but, Yeo said, the institution will “continue to pursue other opportunities as warmer weather returns.”

Opera Colorado bumped this season’s productions and contracts to 2021-22 and beyond, and now is shifting attention to new programming, digital and (later this spring/summer) in person.

Last week, Opera Colorado filmed one of two major digital programs with its partners at Rocky Mountain Public Media, available free in coming months on the  website. “The Promise of Living” and “April in Paris” feature all-new, original content featuring noted opera stars. These are not full-scale productions, but singers and pianists, socially distanced.

Also on the docket for this spring are a chamber music series that will feature Opera Colorado Orchestra musicians and a program at Denver Botanic Gardens. The programming is part of a new series called Opera Colorado Amplified.

“Earlier this month, we launched the Opera Colorado Amplified Resilience Fund to raise the $200,000 needed to support this new series, and are pleased to say we are over halfway to our goal,” Opera Colorado’s Jennifer Colgan said.

The forecast is for stability, a balanced budget and an audience in some capacity for “Tosca” at the Ellie Caulkins Opera House in November. “We’re working with the city on guidelines for fall,” Colgan said. “There are any number of scenarios we’re planning for. It’s frustrating, but what can you do?”

And what happens when the board doesn’t have deep pockets?

Arts groups without wealthy boards or large endowments often also have very modest to no cash reserves and are likely to be casualties of a long-term pandemic crisis. They lack the multimillion-dollar angel.

“Great news for the symphony,” Steuer said of that anonymous $2 million gift, “but while institutions like this are certainly struggling with the challenge of weathering the COVID storm, they also have access to major gifts on a scale that is vastly different from the smaller groups.”

Conventional wisdom says the very smallest and very largest outfits are expected to do best in this crisis, while those in the middle risk sinking under the weight of mortgage, rent, utilities and extra COVID costs.

Platte Forum, the urban art and activism lab, is a good example of a midsize organization that is largely dependent on contributed income and has remained fairly stable throughout the pandemic, Ferrari said. They are even launching a new program, the Immigrant Artist Mentoring Program, in partnership with the New York Foundation for the Arts.

By contrast, she said, an organization such as Mexican Cultural Center, that is dependent on their partnerships and fee-for-service programming, has not fared as well.

Overall, Ferrari wrote in an email, “I’d say that size, discipline, history of percentage split of earned/contributed revenue, and dependency on partnerships and fee-for-service have all played a role in an organization’s ability to adapt, survive and even thrive during the pandemic.”

The Aurora Fox Arts Center is among the first of the smaller local theaters to return to actual in-person theater, following strict health and safety protocols.

“Now that we are back to level orange with cases on the decline, we are ready to return to in-person,” Executive Producer Hellen Murray said. The theater will present “The Pavillion” Feb. 26-March 21, seating 50 people per show. The couple in the play, she said, is “played by a husband and wife who are already bubbled.

“Due to our structure and being part of the City of Aurora, we have fared better than some and it is why we are able to reopen,” Murray added. “I don’t think it can be overstated that a city that backs its arts institutions truly understands how important quality of life is to a community. Now more than ever.”

Also at the smaller end of the scale, Craig Bond, executive director and founder of Vintage Theatre in Aurora,said, “I’ve been very, very busy writing lots of grants (proposals). We are hoping to reopen in July if not early August. We’re still looking at smaller cast productions at first, then in September we plan to go with the originally scheduled ‘Shakespeare in Love.’”

“I had a grant defense over the weekend,” Bond said. “I literally bawled. It’s been so stressful. Within the first week of closing down we received a $5,000 check from a volunteer, an usher. And we had the largest Colorado Gives Day ever. People want us back. We had a 35% increase in donors, many in the $20-$25 range. We’ll be back.”

“People are so Zoom fatigued,” Bond said. “People want to be around each other.”

Bond optimistically predicts an abundance of summer theater: “Everyone is anticipating patrons will have so many choices, it will be very competitive.”