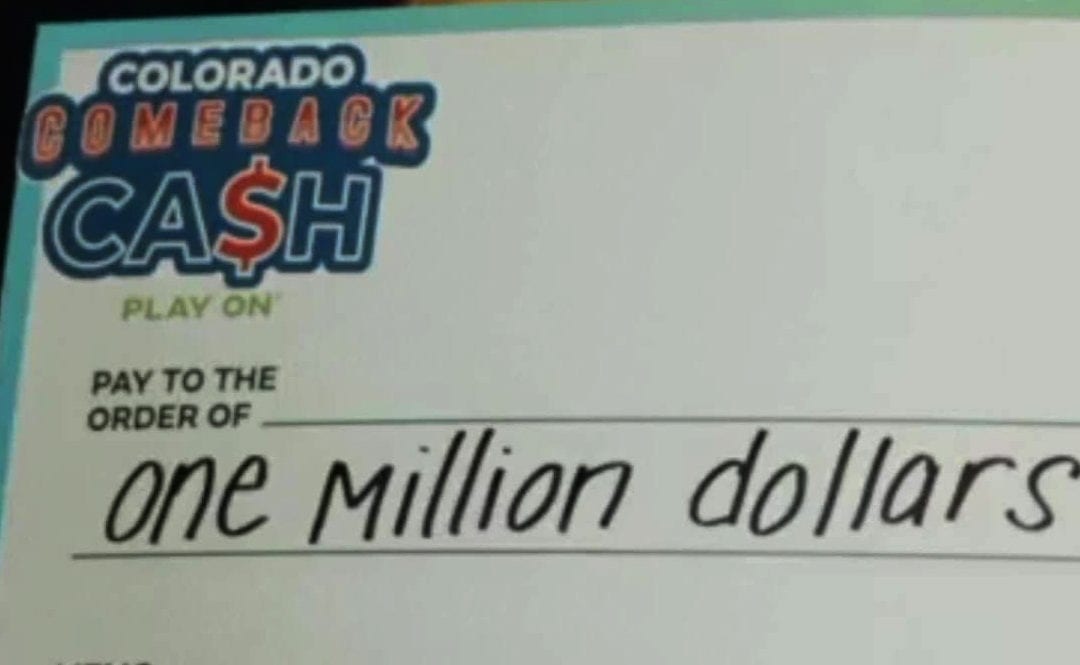 Well, so much for the $5 million carrot in Colorado’s fight against the pandemic. Time for the big stick.

Colorado was one of a handful of states last month that jumped on the vaccine lottery idea, spending a whopping $5 million on the hopes that a far-less-than one-in-a-million chance in winning a million bucks would motivate vax-i-nots to inoculate against COVID-19.

Both the disease and the vaccine are free to everyone in Colorado.

An Associated Press report last week pointed out that states like Colorado, creating big lottery give-a-ways, have not moved the needles into the arms of unvaccinated people like proponents had gambled on.

Let’s set aside for now that Colorado, Ohio, New Mexico and a few other states have spent millions of dollars to hand it over to just a few people, thinking that vaccine lottery chances would persuade people to drop their objections and roll up their sleeves.

It was a nice try.

It was typical of Gov. Jared Polis, who as a state school board member, a congressional legislator and now as governor believes that it’s far better to persuade people to do the right thing, rather than force them.

Some may think I’m far more jaded than Polis. I prefer to call it pragmatic. But here is my observation of people who don’t pay their fair share of taxes, don’t vaccinate their kids against childhood illnesses to go to school, don’t wear masks in public during a pandemic, don’t drive even reasonably safely on highways, water the hell every day out of their giant grassy yards and don’t get a free, available-anywhere-anytime safe and effective vaccine against a pandemic that has killed millions of people and financially destroyed many times more.

I don’t see any qualities there that strike me as a person who would think a lottery chance would send them running for the nearest vaccine pop-up clinic. In fact, a lot of the people are so foolishly set against being vaccinated, they frequently say, “not for a million dollars,” let alone a nearly impossible chance at a million dollars.

After giving away four of five million dollars so far, plus hundreds of thousands of dollars in scholarships to teenagers who vaccinate, the rate of vaccination has slumped to the lowest level since December, according to state health department data. The brief 11% bump in vaccinations after the first week of the Colorado Comeback Cash lotter has essentially evaporated here and in every vax-a-million state but California, according to the AP story about the programs.

Without proof, he told the Denver Post last week during the announcement of the fourth lottery winner that the program has been more effective than spending the money on a statewide advertising campaign.

But far more effective at getting people vaccinated and stemming the once-again dangerous spread of even more virulent COVID-19 variants in Colorado, would be the proverbial big stick.

No vax patch and proof of inoculation? Mask up, when you’re in the stores. No more honor system for people who have none.

Less than two-thirds of everyone over 12 is fully vaccinated in Colorado, and by far, the greatest percentage of those vaccinated are older folks. Despite that, other than a handful of employees in places like stores, restaurants, bars and movie theaters, almost no one is wearing a mask any more.

This isn’t just an eye-rolling annoyance, folks. Every medical expert in the state agrees that this is extremely dangerous, especially because new variants spreading among Colorado residents are more contagious and more likely to inflict greater illness in its victims. And while being fully vaccinated greatly increases the chances you won’t be sickened by the delta variant or others, it’s happening right now, and there are a few people in Colorado hospitalized with “breakthrough” COVID-19 cases.

Since the science is clear that masking reduces the spread of the virus, the state has to make people not vaccinated wear masks in public, not just ask them. That, after a great deal of harrumphing, has already been decided.

Thousands of bars, restaurants and other public venues are reopening or turning their bars and dining rooms into the fun and profitable places they once were. That privilege should be reserved only for establishments that ensure everyone inside are fully vaccinated patrons and employees.

In your twenties with a pocketful of cash and the need for a beer but don’t want to vaccinate? Bummer, bruh. Stay home and check out your buds on Instagram living the life, or get vaccinated and join them.

That would be motivating. And for those vacci-knot-heads who do their research on Facebook and put their faith in other vacci-nut-jobs instead of the entire science and medical community, including their own doctor? They’ll be safer in their bunker until this thing truly goes away.

Quit spending money on useless carrot schemes. Save the cash for the few who need a ride or a day off after getting the vaccine and can’t manage it on their own.

Too many have died. Too many lives have been ruined. Too much has been lost. And the potential for even more death and disaster is still far too great to just hope people who often live their lives in the dark will suddenly see the light.

Bring out the stick so we can all say, “thanks a million.”