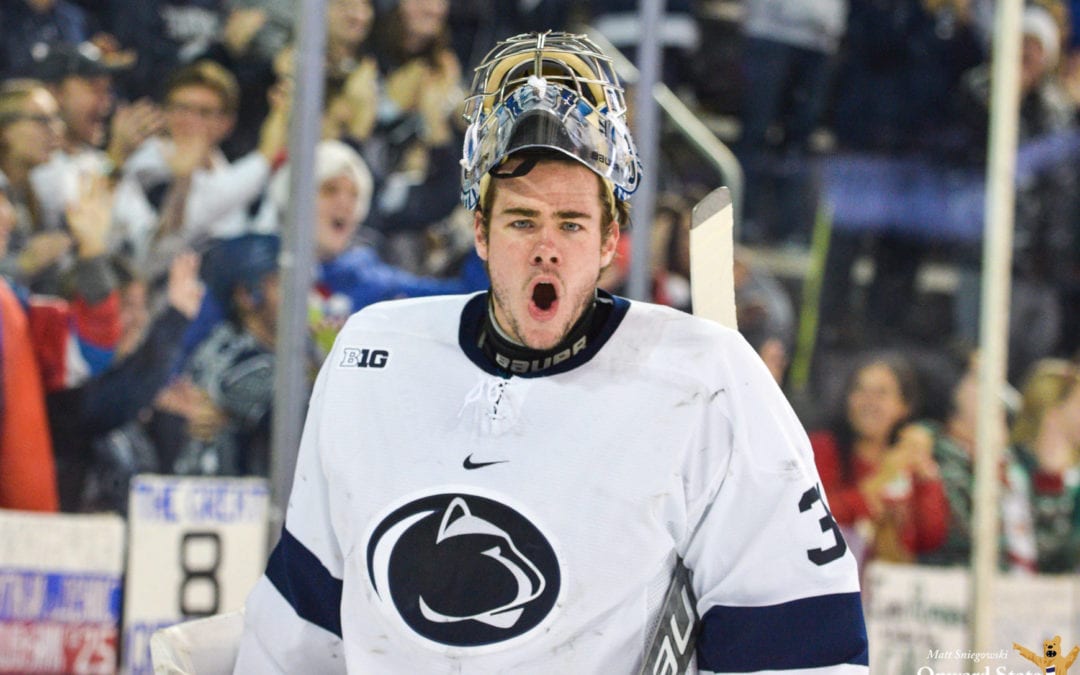 Penn State hockey goaltender Peyton Jones will get his pro career started in the AHL next season.

Jones signed a two-year contract with the Colorado Eagles — the minor-league affiliate of the NHL’s Colorado Avalanche — on Monday.

As far as he can remember, head coach Guy Gadowsky never had a collegiate goaltender spend four consecutive seasons as his starter before Jones’ time in Hockey Valley came to a close this year. He’ll leave as the program’s all-time leader in most statistical categories, including wins (75), games played (131), and total saves (3,642).

Jones couldn’t have asked for a better start to his college hockey career after his dazzling freshman season. He finished the year with a 23-10-2 record, .904 save percentage, and a single-season career-best 2.60 goals-against average. Penn State captured its first-ever Big Ten championship in no small part thanks to Jones’ heroics, as he made 118 saves on 123 shots over the course of the weekend.

In the two seasons after 2016-17, Jones’ production and level of play dipped a tad. However, his slightly-worse numbers could also be attributed to the Nittany Lions’ defensive struggles throughout those two seasons. Jones’ combined record in his sophomore and junior years was 35-25-6, and Penn State qualified for the NCAA tournament in the 2017-18 season. Some of Jones’ underlying numbers — including goals-against average (3.18) and save percentage (.903) — took a small tumble in these years.

The netminder from Langhorne, Pennsylvania, however, got back to his stellar freshman season form during his final season at Penn State. With an improved blue line in front of him, Jones went 17-9-2 with a career-best .920 save percentage and 2.61 goals-against average. The Nittany Lions secured their first-ever regular season conference title and, had the coronavirus pandemic not canceled the team’s postseason, were primed to qualify for the NCAA tournament after missing out in 2018-19.

In addition to those seniors, juniors Cole Hults and Evan Barratt signed their entry-level contracts with the Los Angeles Kings and Chicago Blackhawks, respectively, as draft picks of those organizations.