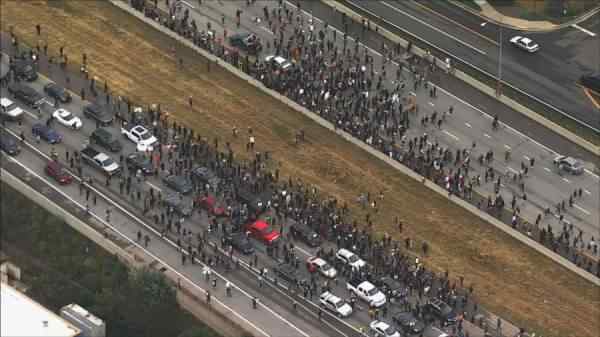 (Gateway Pundit) – As reported earlier by Cassandra Fairbanks — A car drove through a crowd of protesters that were walking on I-225 in Aurora, Colorado, and a protester shot other protesters while trying to shoot the driver.

At least two protesters were hit or grazed by bullets as a fellow “protester” tried to shoot the driver. There were multiple gunshots directed at the car, but the people inside did not appear to be injured.

“While the protestors were walking on I-225, a vehicle decided to drive through the crowd. A protestor decided to fire off a weapon, striking at least 1 other protester. They were transported to the hospital in stable condition,” the Aurora Police Department tweeted.

There was a family in the car and they were approached by an armed protester.

So this shooting just happened at BLM riot in Aurora. There was a car with a family in it, they approach the car with a rifle…The car speeds off. They almost executed a family just like they executed the teenagers in the Seattle chop. #aurora #protests #antifa #BLM pic.twitter.com/lEBCyKlWAt

In a follow up, the department wrote that “Someone else showed up to the hospital with a graze wound. The vehicle was towed and we are investigating that incident.”

Thank you to everyone who submitted tips about the identity of the Interstate 225 shooter. We have made an arrest & he is in custody

Samuel Young (07/08/97) was arrested on 4 counts of Attempted Homicide. A booking photo will be released at a later timehttps://t.co/juWuKMIrSG pic.twitter.com/MmmZ9jeVtt

He was shooting at the family in the vehicle and shot two protesters instead.

Hey internet. Let’s help out these officers and find this guy. Thanks. https://t.co/f7DZjGjqYG

On Monday Samuel Young, 23, was arrested for shooting his fellow protesters.

A man who shot and wounded two demonstrators at a protest in Colorado over the weekend has been arrested on suspicion of attempted homicide.

Samuel Young, 23, was taken into custody on Monday in the Denver suburb of Wheat Ridge.

Investigators said Young was among the hundreds of protesters who were blocking Interstate 225 in neighboring Aurora on Saturday when a Jeep managed to pass through barricades and barreled toward the crowd.

Young allegedly raised his rifle and was aiming at the Jeep when he opened fire, striking one male protester in the leg and grazing another man’s head.

‘It was the most reckless thing I have seen in a long time,’ Aurora’s Deputy Chief Harry Glidden said.