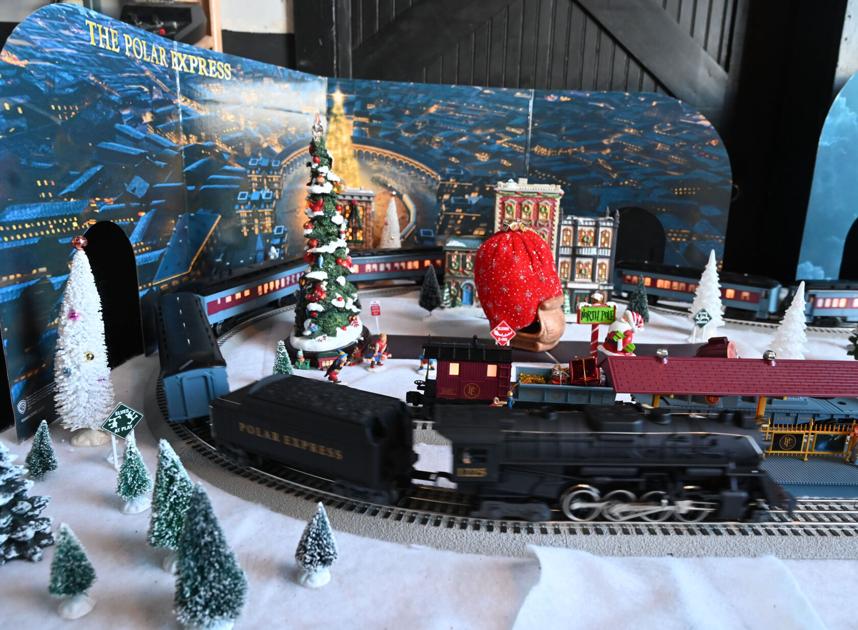 In the back room was a 20-foot model train — a replica of The Polar Express.

In 2006, Travis and his father, former Palmer Lake Town Councilman Gary Coleman, began a communitywide holiday tradition. Every year around the holidays, they would set up and display the replica in various places around Palmer Lake for the community to see.

“It’s just magical. It’s one of those things you just have to see,” said Connie Balcerovich, Travis’ sister. “There were many children and adults who loved it.”

The display was one of several train-related traditions the duo enjoyed together, and The Polar Express model train replica was Gary’s favorite of all his dozens of model trains.

Travis Coleman takes a video of the Polar Express train that he and his father would set up every year as a holiday tradition for the community.

When she found out years later about the Railway Foundation — the Trolley Museum, it’s called by locals — Balcerovich came up with the idea to surprise Travis by giving the model train a permanent home where visitors could see it year-round. It was officially turned over to the museum and dedicated to Gary and Travis Coleman on Nov. 23.

Museum leaders were “ecstatic” to receive the donation, Balcerovich said, and were surprised by the size of the replica.

“It’s far bigger than we thought it would be and the room it’s in now isn’t quite big enough” for the full display, said Dave Lippincott, president of the Railway Foundation.

The museum has plans to display the full-sized model train after the holidays, he added, and the Trolley Museum is the perfect place to show it.

“The kids love the movie,” Balcerovich said of the 2004 animated film, “The Polar Express,” featuring Tom Hanks. It is based on Chris Van Allsburg’s 1985 children’s book of the same name. “Now they can actually see it, physically. We have re-created what happens in the movie.”

Easter eggs from the film can be spotted all over the model train configuration, including the main character, Hero Boy, and Billy the Lonely Boy. The snowman in front of Hero Boy’s home makes an appearance, as do the “hobo” on top of the train, the caribou from the caribou crossing scene, and the North Pole, to name a few. Visitors will also hear the voice of Tom Hanks as the train conductor, one of several characters he voiced in the movie.

Last month, Travis officially donated the model train to the Pikes Peak Historical Street Railway Foundation and thanked the museum for displaying it. He said he liked the idea that visitors would be able to see the model year-round.

The Railway Foundation, at 2333 Steel Drive in Colorado Spring, is open Fridays and Saturdays from 9:30 a.m. to 3 p.m. Admission is $9 for adults, $7 for seniors and active military, $5 for children ages 5 to 12, and free for children under 5 years old.

Groups are limited to six or fewer, and face masks are required.