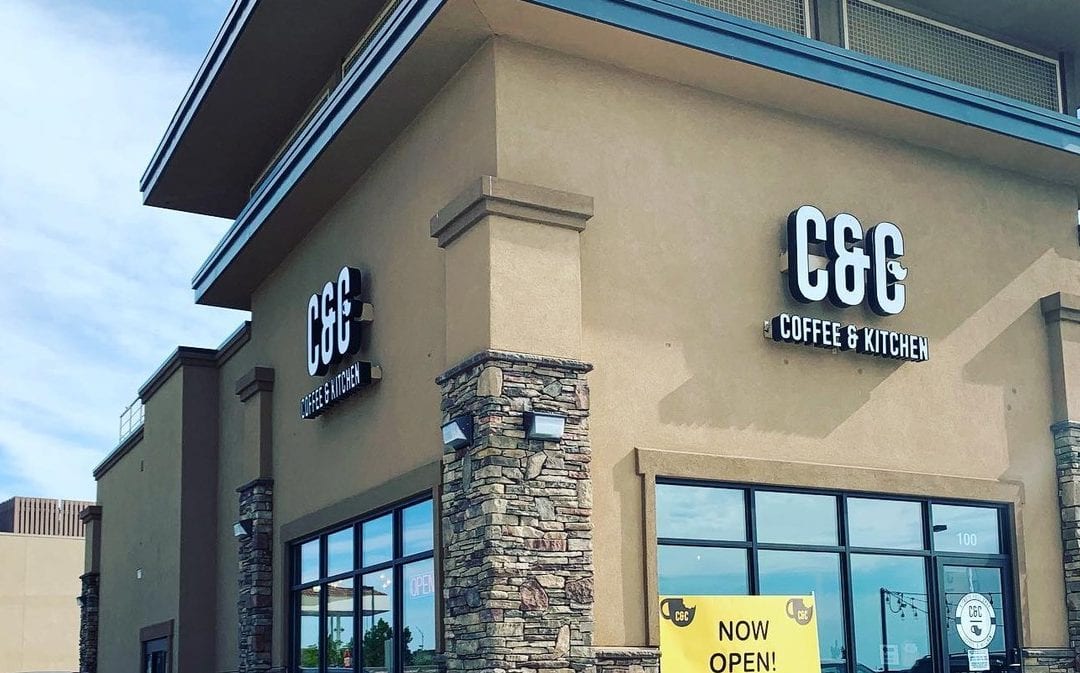 On Sunday, C&C Coffee and Kitchen had an all-caps, partially punctuated sign taped to its front door that said “ATTENTION! OUR FREEDOM DOESN’T END WHERE YOUR FEAR BEGINS. IF YOU ARE SCARED STAY AT HOME! IF YOU ARE AFRAID TO BE WITHIN 6FT OF ANOTHER PERSON DO NOT ENTER THIS BUSINESS! GOD BLESS AMERICA!”

The Castle Rock, Colorado restaurant also had an open-carrying ‘bouncer’ posted outside the door, which seems excessive for a restaurant that uses the word ‘fluffy’ more than once on its menu. But the hundreds of people who crowded around tables, clumped in groups, and waited in line weren’t put off by the ‘FREEDOM,’ by the restaurant’s self-described ‘No mask, no problem’ approach, or by the fact that C&C Coffee wasn’t even supposed to be open at all.

C&C’s owner, April Arellano, shared a now-deleted Facebook video of the crowd and gushed about how many people were packed inside. The restaurant also blew the dust off its Twitter account so it could post its first tweet in almost a year. “We are standing for America, small businesses, the Constitution and against the overreach of our governor in Colorado!!” it wrote, tagging President Donald Trump and adding four American flag emoji.

“I expected it to be busy. I never expected this,” Arellano told Colorado Community Media. “I’m so happy so many people came out to support the Constitution and stand up for what is right. We did our time. We did our two weeks. We did more than two weeks […] and we were failing. We had to do something.”

That version of ‘doing something’ included trying to get everyone’s attention—and it worked. Colorado governor Jared Polis referred to the restaurant as an “immediate health hazard” on Monday.

“I joined most Coloradans in in our frustration watching videos of people illegally packed into restaurants and thinking about all the moms and grandmothers and aunts and everyone who was put at increased risk of dying from this horrible virus,” he said. “I hope, I pray, that nobody falls sick from businesses that choose to violate the law.”

The Tri-State Health Department noticed too and, as a result, the restaurant’s business license has been suspended for at least 30 days.

“It is disheartening that this restaurant has chosen to move ahead of the public orders and not even consider implementing best practices to prevent the spread of COVID-19,” Dr. John M. Douglas, Jr., the executive director of Tri-County Health Department, said in a statement.

“It is not fair to the rest of the community and other business owners that are following safer-at-home and doing their part. We sincerely hope that C&C will choose to cooperate with the rules under which they are allowed to operate so we can lift this closure order.”

The restaurant was told that it had to close immediately, but social media posts seem to illustrate that the restaurant stayed open and continued serving customers, including a grown man who carried a Captain America shield. A video posted on Instagram on Tuesday morning appeared to show a woman opening the door to the restaurant and yelling “Do you guys want some coffee? We’ve got coffee and corona.”

Governor Polis said that the suspension could mean that C&C Coffee will still be closed when other restaurants are allowed to reopen, which could be at the end of this month. “It’s unfortunate that the owners and the employees of C&C Coffee and Kitchen will have to suffer the economic loss of a prolonged closure when other restaurants across the state are likely opening and welcoming customers,” he said, according to the Denver Post. “It’s really unfortunate that they’ll remain shuttered indefinitely until they can resolve the health hazard.”

Some locals have responded by literally taping money to the restaurant’s door, and perhaps unsurprisingly, a GoFundMe was started for the owners on Monday afternoon. “We are doing two things: 1) supporting this brave family who pushed back and 2) poking the bear—Polis to let him know we are not hibernating,” organizer Steve Gilbertson wrote. “Help these brave people survive the one thing worse than corona virus [sic] Polis himself.”