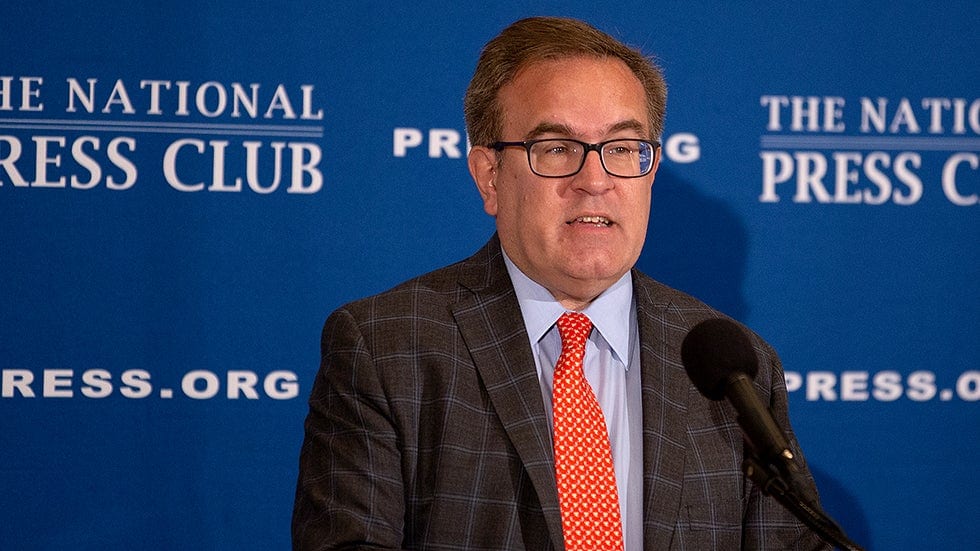 WEEDING THROUGH THE APPROVAL: The Environmental Protection Agency (EPA) approved for five years the use of two products with the weedkiller dicamba on cotton and soybeans that are resistant to it.

It also extended the use of a third product.

The agency’s prior approval of dicamba was vacated in court over its impacts on other crops that it can harm.

Wheeler said the decision will provide “certainty to growers as they make future purchasing decisions.” He said the new approval circumvents issues with the prior approval by increasing the size of buffer zones between dicamba-sprayed crops and other crops and also increasing the buffer size for endangered species.

A study by researchers from the National Cancer Institute from earlier this year also linked dicamba use to liver and bile duct cancer.

However, the EPA continued to find that dicamba was not likely to be carcinogenic, saying that it identified “several deficiencies” in the study.

Wheeler told reporters on Tuesday that states would be allowed to both further restrict the use of dicamba and also further expand it.

He added that expansion wouldn’t be “automatic” and that the states would have to file the “appropriate requests” with the agency.

The EPA previously re-approved dicamba in 2018 to control weeds on cotton and soybeans that have been genetically engineered to tolerate it. At that time, opponents argued that other crops that are not resistant to dicamba may be impacted by its usage.

In response to challenges, a federal court ruled earlier this year that in the 2018 re-approval, the EPA “substantially understated” certain risks posed by the chemical’s use.

OIL CAN: The Trump administration has finalized its plans to expand drilling in the National Petroleum Reserve in Alaska (NPR-A), upsetting environmentalists by creeping toward protected territory within the reserve.

The approval of the Willow Project allows ConocoPhillips to produce up to 590 million total barrels of oil over the next 30 years.

Donald John TrumpTrump admin to announce coronavirus vaccine will be covered under Medicare, Medicaid: report Election officials say they’re getting suspicious emails that may be part of malicious attack on voting: report McConnell tees up Trump judicial pick following Supreme Court vote made his administration focus on American energy independence and the freedom it provides from day one of his term,” Interior Secretary David Bernhardt said in a release announcing the decision.

“This decision will make a significant contribution to keeping oil flowing down the 800-mile Trans Alaska Pipeline decades into the future while delivering federal and state revenue as well as important impact assistance to the affected native communities.”

Environmentalists say the oil activity will disrupt polar bear and caribou, particularly as oil activity expands next door at the Arctic National Wildlife Refuge (ANWR). On Friday, Interior released a plan that would greenlight seismic testing there as soon as December.

“The attacks on the Arctic just continue to escalate. The finalization of oil and gas plans for the Willow project and the Arctic National Wildlife Refuge are a one-two punch to wildlife including imperiled Southern Beaufort Sea polar bears and their critical habitat,” Nicole Whittington-Evans, Alaska program director at Defenders of Wildlife, said in a release.

“Despite the urgent need to ramp down our carbon emissions, as the Arctic continues to melt, the Bureau of Land Management just continues its drumbeat to drill for fossil fuels.”

(COURT) DECISIONS HAVE CONSEQUENCES: Environmental groups are pivoting their case challenging oil and gas development on public lands in the wake of a federal court decision ousting the head of the Bureau of Land Management (BLM) and tossing the agency’s work in Montana.

The new claim from the Center for Biological Diversity and the Sierra Club along with other environmental groups is the first such argument to rely on a September court decision that found BLM head William Perry Pendley had “served unlawfully … for 424 days.”

The suit asks the courts to invalidate oil and gas leases teed up across 1.7 million acres of public land in Colorado.

The new brief “reflects a reality that is now established legal precedent: Pendley’s authority as bureau director is invalid and planning decisions approved on his watch are likewise invalid,” Melissa Hornbein, staff attorney with the Western Environmental Law Center, which is also involved in the suit, said in a release.

“The [resource management plan] is blatant in its disregard of the law, and our new claim merely reflects the fact that its legal failings stem from Pendley’s unlawful leadership of the bureau,” she added.

Pendley, a controversial figure due to his history of arguing against federal ownership of public lands, was also opposed by environmentalists for what they see as an expansion of oil and gas activity on public lands.

Green groups have identified a list of at least 30 land management plans or other actions on federal lands they will seek to overturn after the Pendley decision.

In addition to arguing the Department of the Interior violated federal vacancy laws by using a series of temporary orders to keep Pendley in place, the court decision also invalidates three Montana land management plans made under his tenure. That includes one that would open 95 percent of 650,000 acres of BLM land to resource extraction such as mining and drilling.

“This is the first step in scrubbing the stain of Pendley’s corrupt, unlawful legacy from our public lands,” Taylor McKinnon, a senior campaigner at the Center for Biological Diversity, said in a statement.

Interior did not immediately respond to request for comment but has pledged to fight the Montana decision.

Hurt by fracking but voting for Trump,

The Trump administration is burying dozens of renewable energy studies,

Google to use artificial intelligence for weather forecasting, research

Japan to become carbon neutral by 2050

EPA of pesticide previously struck down in court

FROM THE HILL’S OPINION PAGES:

You can’t address climate by ignoring 71 percent of the planet, writes David Helvarg, the executive director of Blue Frontier, an ocean conservation group and  Jason Scorse, the director of the Center for the Blue Economy at the Middlebury Institute of International Studies.