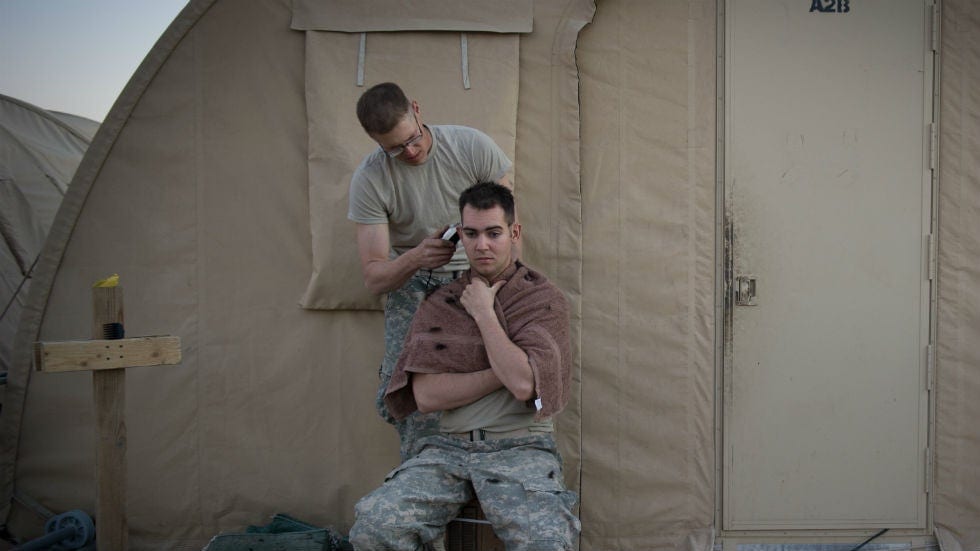 Happy Tuesday and welcome to Overnight Defense. I’m Ellen Mitchell, and here’s your nightly guide to the latest developments at the Pentagon, on Capitol Hill and beyond. CLICK HERE to subscribe to the newsletter.

THE TOPLINE: The Army will make major changes to its hair and grooming policy, including allowing long ponytails, buzz cuts, earrings, lipstick and nail polish for women in uniform, in a push to be more inclusive, service officials revealed Tuesday.

The changes — which are expected to be dictated in an Army memo between Feb. 25 and 26 — are based on recommendations made in December by a diverse panel made up of Army leaders across the service, the majority of whom were women.

“This is one way we are working to improve the lives of our soldiers, our force, by putting people first, understanding their concerns, taking action when necessary and maintaining their razor-sharp edge of readiness,” Lt. Gen. Gary Brito, deputy chief of staff for Army Personnel, told reporters.

Changes to hair standards: Sgt. Maj. Brian Sanders, the Army uniform policy branch sergeant major, told reporters that many of the hair alterations are meant to prevent a type of hair loss known as alopecia, as the previous regulations, which required a tight bun, could cause hair loss or “other medical conditions of the scalp,” especially among women of color.

Female soldiers that choose to wear a long ponytail, meanwhile, are only allowed to do so during physical fitness training, tactical training and situations where they are required to wear a helmet, as they can tuck it into the back of their Army uniform.

Other alterations: In addition, women are now allowed to wear gold, silver and diamond earrings with their Army Combat Uniform, a move that “has never been authorized before,” and “is extremely groundbreaking for the U.S. Army,” Sanders said.

Currently, female soldiers are only allowed to wear earrings with their service and dress uniforms. They are still prohibited from wearing them in the field or on combat deployments.

Maintaining identity: Psychologists on the panel said such additions “allow the opportunity for a woman to still feel like a woman inside and outside of uniform,” Sanders said.

“One thing we can never forget is that at the end of the day, our women are mothers, are spouses, they are sisters and they definitely want to be able to maintain their identity,” Sanders said.

Mark EsperTrump administration official Norquist sworn in as acting Pentagon chief Watch Out: Progressives are eyeing the last slice of the budget Biden needs to fill the leadership gaps on Day One  in July ordered a review of whether current grooming standards are racially biased, part of a directive aimed at stamping out racial discrimination within the military.

While grooming regulations are meant to reinforce uniformity, many women of color have complained that the strict rules don’t allow for braids or other hairstyles that are easier for those with different textures and hair lengths.

Meanwhile, in other services… Other services in years past have altered hair rules for female service members, including the Navy, which in 2018 said sailors could wear ponytails and styled buns while in uniform.

More recently, the Air Force last week said women in the service would be able to wear their hair longer beginning in February.

“In addition to the health concerns we have for our Airmen, not all women have the same hair type, and our hair standards should reflect our diverse force,” Air Force Chief Master Sergeant JoAnne Bass said in a statement. “I am pleased we could make this important change for our women service members.”

DC NATIONAL GUARD HEAD SAYS PENTAGON RESTRICTED HIS AUTHORITY BEFORE RIOT: Pentagon officials restricted the commander of D.C. National Guard’s authorities ahead of the Jan. 6 riot at the Capitol, the commander revealed.

Normally, a local commander would be able to make decisions on taking military action in an emergency when headquarters approval could take too much time.

But Maj. Gen. William Walker, the commanding general of the D.C. National Guard, told The Washington Post the Pentagon took that power away from him ahead of the Capitol riot, which meant he could not immediately deploy troops when the Capitol Police chief called asking for help as rioters were about to breach the building.

“All military commanders normally have immediate response authority to protect property, life, and in my case, federal functions — federal property and life,” Walker told the Post. “But in this instance, I did not have that authority.”

Asked how quickly guardsmen could have arrived at the Capitol, which is two miles from the D.C. National Guard’s headquarters, without the higher-level approval, Walker told the Post, “With all deliberate speed — I mean, they’re right down the street.”

Why it happened: The restriction was placed on Walker after the Guard’s heavy-handed and widely criticized response to racial justice protests over the summer. In June, hundreds of guardsmen from around the country poured into the nation’s capital at former President Trump

Donald TrumpSchumer: Impeachment trial will be quick, doesn’t need a lot of witnesses Nurse to be tapped by Biden as acting surgeon general: report Schumer calls for Biden to declare climate emergency ’s request, despite objections from local authorities.

A National Guard helicopter also hovered low over protesters as a show of force, a move that drew widespread scrutiny and rebuke.

“After June, the authorities were pulled back up to the secretary of defense’s office,” McCarthy told The Post. “Any time we would employ troops and guardsmen in the city, you had to go through a rigorous process. As you recall, there were events in the summer that got a lot of attention, and that was part of this.”

Authority returned: Authorities were pushed back down to Walker ahead of President Biden’s inauguration, McCarthy added.

Blame game: The House Appropriations Committee was set to receive closed-door testimony Tuesday from McCarthy and Walker as it probes security failures that led to the Capitol riot.

Pentagon officials, local D.C. authorities and the Capitol Police have traded accusations about who is to blame for the Guard’s slow response once rioters breached the Capitol. The Pentagon has said Capitol Police denied offers of Guard assistance in the days before the attack. A Pentagon timeline of events says it took roughly an hour and a half to approve the Guard’s deployment on Jan. 6 after requests were made by Capitol Police and D.C. Mayor Muriel Bowser

Also under scrutiny in the Pentagon’s response is the phone call in which then-Capitol Police Chief Steven Sund requested assistance. Sund previously told the Post that Army staff director Lt. Gen. Walter Piatt said on the call he didn’t like the “visual” of the Guard policing the Capitol, a comment Piatt initially denied before backtracking last week.

Walker told the Post there was discussion of optics but said he could not attribute the comments to a particular person.

The state’s entire congressional delegation argues that “significant evidence exists that the process was neither fair nor impartial and that President Trump’s political considerations influenced the final decision,” according to a letter sent to Biden on Tuesday.

Michael Farrand BennetLawmakers move to oust extremists from military Top Democrat pushes for tying unemployment insurance to economic conditions 50-50 Senate opens the door to solutions outlasting Trump’s moment of violence  (D-Colo.), also requests that the new administration “suspend any actions to relocate the headquarters until you complete the review.”

Peterson Air Force Base in Colorado is the current provisional headquarters of the command until 2026.

Alabama lawmakers lauded the decision, made under the previous administration, though lawmakers from other states vying for the headquarters called the choice premature and rushed.

The argument for reversal: In the letter, the lawmakers complain that the Air Force’s selection process lacked transparency in the data used to determine the best location for accommodating the command’s personnel and their families.

“This prevented clear, public evaluation of the scoring criteria,” they write. The gap in information raises concerns “about how the previous Administration rendered the final decision.”

ON TAP FOR TOMORROW

Air Force Chief of Staff Gen. Charles Brown will speak at an Association of Old Crows virtual discussion at 1 p.m.

Brookings Institution will hold a virtual discussion on “Challenges for the Biden Administration: Addressing the Evolving Air and Missile Threat,” with former Defense officials and experts at 2 p.m.

The Intelligence National Security Alliance will hold a virtual discussion with Vice Adm. Jeffrey Trussler, deputy chief of naval operations for information warfare in the Office of the Director of Naval Intelligence, on “the Navy’s plans for strengthening its cybersecurity posture,” at 4:30 p.m.