Opinion | Governors Might Not Be Able to Save Us, but They Can Raise Hell – The New York Times 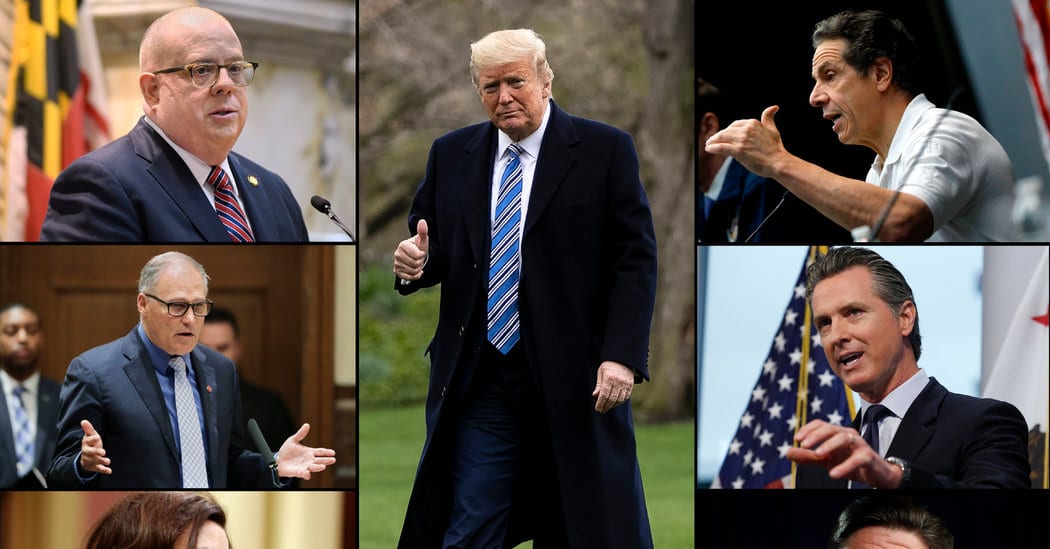 “The governors, locally, are going to be in command,” he said on the same day Mr. Pence spoke of federalism’s virtues. “We will be following them, and we hope they can do the job.”

Whether or not Mr. Trump meant it, he made his point: Governors who criticized the president would put their states at risk of getting short shrift from the federal government.

The following day, The Washington Post detailed the uneven distribution of protective gear from FEMA. Colorado, Maine and Massachusetts, led by two Democrats and a Republican critic of the president’s pandemic policies, received only small fractions of what they asked for while Florida got the delivery it requested — twice over.

Federal officials say that in allocating equipment, they have made their best assessment of the relative needs of states. But several governors remain frustrated. Mr. Trump has politicized this process at a moment when states are under maximum strain.

While the governors who have acted with foresight and care have received deserved praise, others have sowed division. Mr. DeSantis blamed travelers from New York for the problems his own policies caused. Gov. Gina Raimondo of Rhode Island sent the National Guard to stop cars with out-of-state license plates at her state’s border and said law enforcement officers would knock on doors in coastal communities in search of visitors from other states. Those are measures that public health experts have not called for and that may be unconstitutional.

Other governors, in Texas as well as Florida, have refused to impose adequate statewide social distancing. Inconsistent state policies hamper the national effort to throttle the contagion. They have also thrown into disarray efforts by business to maintain supply chains across state lines. Last week, the Business Roundtable, the U.S. Chamber of Commerce and the National Association of Manufacturers wrote to the National Governors Association asking for uniform directives with a single definition of “essential” businesses that can operate.

Instead of pandering to Mr. Trump or to their voters, governors should recognize their common interest in a consistent national response to the crisis, and put coordinated pressure on the White House to make evidence-based policy. Mayors can assist, as the U.S. Conference of Mayors did last week by surveying its members and telling the public that almost 90 percent of cities did not have enough test kits or masks and other protective equipment for health care workers.

It’s a lesson of the schoolyard that applies to politics: Only a united group can defeat a bully. When politicians take on Mr. Trump one by one, they can’t match the power of the American presidency. Congress has failed to challenge Mr. Trump effectively because the Republican-led Senate refuses to put the interests of the institution above partisanship. But the governors, with their direct responsibility for the welfare of their citizens, have urgent reason to band together and do better.

The governors can’t take over the federal government. But they can raise hell.

Eric Posner is a professor at the University of Chicago Law School and is the author of the forthcoming “The Demagogues’ Playbook: The Battle for American Democracy from the Founders to Trump.” Emily Bazelon is a staff writer at The New York Times Magazine and a Truman Capote fellow for creative writing and law at Yale Law School.

The Times is committed to publishing to the editor. We’d like to hear what you think about this or any of our articles. Here are some . And here’s our email: .