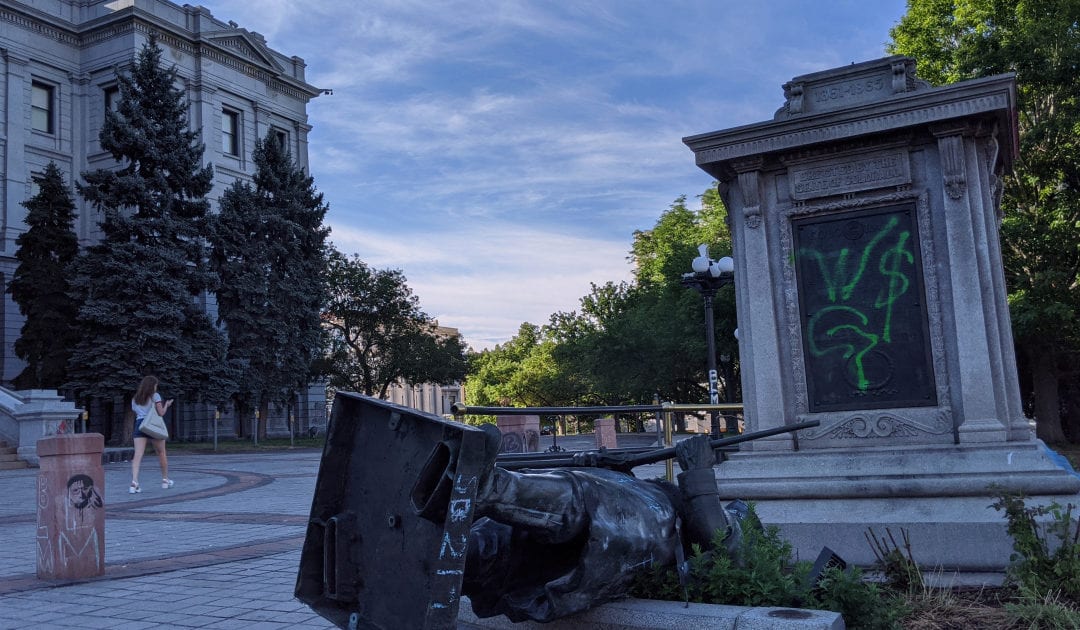 I’m prone to obsessions.  My (patient) wife has spent too much time listening about weightlifting, physics, birds, three-toed sloths.  When it comes to history, it’s gotta be the Cold War. I’ve read a little of everything on the subject.

When I think about history, I’ve never been a fan of the idea that there is one overarching description or theory that encapsulates all of human experience; there are many correct ways to view the facts of the past, depending on the framework we choose to lay over them.

At the same time, I don’t think anyone can consider themselves well versed in history without taking the time to try to understand things from a variety of perspectives.  Toward that end, I’ve read both Russian and American history.

It’s also why I was disappointed to read about the decision to replace the statue of the Civil War soldier that used to sit in front of the Colorado state Capitol (until it was pulled down by protesters in June) with the statue of a crying woman memorializing the Sand Creek Massacre.

Lest I be misunderstood, before anything else, let me make one thing clear.  The Sand Creek Massacre was a horrible thing.  I remember reading about it and visiting the historical site.  It was a startlingly brutal and terrible thing to do to fellow human beings.

I have no problem with recognizing this and bringing it to people’s attention. I have no problem with bringing up the bad things that have happened in our state’s history.  I do have a problem when this seemingly has to come at the expense of the good things.  I have the feeling that lately we’re pointing in the direction of sacrificing all the good in our history out of a sense of acknowledging the bad.

I prefer a more nuanced view of how to present history. I prefer the view that we are both evil and altruistic to varying degrees and at different times.  While some soldiers marched to ruthlessly kill women and children, some marched (and gave their lives) to free people they would never meet.

Why is there no room for both at our Capitol?

The ripping down of one to be replaced by the other strikes me as shortsighted.  What does this teach our young ones?  I believe it teaches them an incomplete view of history; I believe it robs them of the chance for us to create teachable moments.

Imagine the power in the lesson when you can take a child from a statue honoring freedom and sacrifice directly to another reminding us of the horrible things humans are capable of.

It was not made in reference to statues in public squares, but I am reminded of a quote by U.S. Supreme Court Justice Louis Brandeis: “If there be time to expose through discussion, the falsehoods and fallacies, to avert the evil by the processes of education, the remedy to be applied is more speech, not enforced silence.”

If we truly seek to educate, let’s not make ideas and perspectives battle it out in a zero-sum game.  Let’s not restrict ourselves without having to.  The solution to the problem is more voices, not less.

Cory Gaines of Sterling is a native Coloradan who lives for what Richard P. Feynman called “the pleasure of finding things out.”