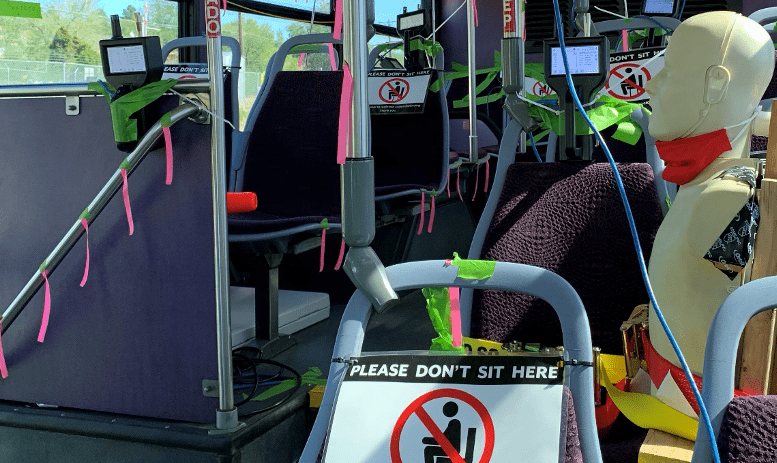 When a passenger who sits in the front of a bus coughs, sneezes or exhales heavily, the expelled airborne particles can travel all the way to the back row of the bus. And that’s where the particles tend to collect.

“It’s not just the results — it’s the scientific basis, so guidelines are backed by the science,” he said. “Our goal is to provide clarity with the science and determine what you can do, practically speaking, to reduce risks.”

Local employees at the nonprofit company, which does research and development for the federal government, wanted to contribute in a scientific way to preventing the spread of the novel coronavirus, Edwards said.

A team first studied mask usage, concluding that nonmedical masks can help contain droplet and aerosol dispersion by diffusing the particle cloud and slowing down its travel speed. The amount of containment depends on the fabric, mask design and exhalation, the study determined.

A team of eight then turned their attention toward how to mitigate virus contagion on buses.

Many research projects about COVID have relied on computer simulations, Edwards said, but, “We wanted a real representation of people breathing, coughing and sneezing.”

No passengers were used. An old CPR dummy was rigged to expel sodium chloride particles, and multiple particle sensors placed throughout the buses measured aerosol dispersion.

After 78.3 million data points and 124 miles of on-the-road testing, six recommendations came out of the study’s findings. Among them were:

— Wearing a mask alone can reduce the spread of potentially infectious particles by 50% or more, depending on the quality of the mask, results showed. Masks also reduced the dispersion distance by several feet.

“Buses have been a concern of mine for potential spread,” he said. “This way, we had a little more information than just our gut instinct.”

Keeping windows open during bad weather was done this this fall, but, since D-11 switched to remote learning again after Thanksgiving break, the real test will be when school resumes next semester, Seaman said.

“We established a fair weather/foul weather plan on which windows we’d keep open — three in foul weather,” he said. “It’s a balance between ventilation, comfort and safety.”

Opening even just three windows when it’s cold and snowing could become an issue that would affect whether students could learn in person, Seaman added.

While students who were symptomatic have ridden school buses, as determined through contact tracing, Seaman said D-11 hasn’t had confirmed transmission on the 100 buses that the district runs daily for in-person instruction.

The recommendations make sense, Blewitt said, and are consistent with best practices the industry is promoting.

Ninety-nine percent of local passengers are complying with the mask mandate, he said, and buses are keeping windows open year-round to improve air circulation.

Some seats are cordoned off, and a 40% to 45% decrease in ridership during the pandemic means buses rarely have more than 15 passengers.

Despite the efforts, Mountain Metro had a COVID outbreak last month, with seven drivers becoming infected and more than a dozen possibly exposed. The resulting shortage of drivers led Mountain Metro to temporarily halt three bus routes and eliminate some weekend services.

Buses affected by COVID are quarantined for three days and thoroughly cleaned and sanitized, Blewitt said.

Passenger infection has been rare, he said.

Many outbreaks happen “off the job, not so much on the job,” Edwards said. An August analysis of COVID by the American Public Transportation Association showed cases on mass transit systems are reasonably low among public environments, he said.

A technical report on the MITRE study will be released soon to government agencies, including transportation departments, across the nation, Edwards said.