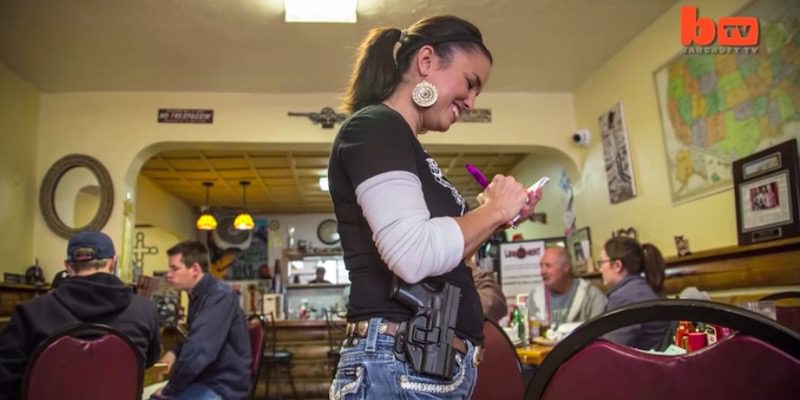 The owner tweeted, “If you want freedom, you have to go out and take it.”

Colorado Governor Jared Polis(D) has said that the decision to reopen restaurants in the state and what precisely that would look like will be made on May 25. That’s quite a long time since the “30-day” initial state-wide shutdown came into effect on March 17.

How do businesses that rely on daily clients continue to survive a government shutdown that has persisted for 3 times longer than anticipated? Gov. Polis isn’t saying that restaurants will open on May 25, but the decision on when and how they will open will be made then. Will they be permitted 50 percent capacity? 30 percent? Less than that? No one knows.

Lauren Boebert, the owner of Shooter’s Grill in Rifle, Colorado, says that if her popular restaurant doesn’t open now, it may not open ever again. In an effort to keep her small business going, she reopened the restaurant on Saturday.

Shooter’s is an unusual gun-themed restaurant that allows the open-carry of firearms by customers as well as employees. There’s a sign on the door that says, “Guns are welcome on premises.”

Clearly, someone who owns a business like that isn’t going to like an infringement on their freedoms.

Yesterday, I opened my restaurant in Rifle, CO.

Small businesses everywhere deserve the chance to open up. We are the life blood of this nation’s economy.

Thank you to #BikersForTrump and more for coming out and joining us at @ShootersGrill yesterday! 🇺🇸 pic.twitter.com/4T2Icajl4G

The Garfield County Sheriff’s Office issued a cease and desist order on Tuesday.

“There’s no difference into going into my restaurant for 20 minutes and someone going into a salon for an hour-and-a-half,” said Boebert.

Boebert said she will do everything to keep her doors open and her staff employed.

Watch the Denver news report on this the reopening:

Boebert says that she tried talking to officials–the Sheriff, Chief of Police, public health, City of Rifle, commissioners–but didn’t get anywhere with any of that. There was a whole lot of blame-shifting and nobody really knew who was in charge, so, as a business owner, she decided to take charge and open her business. She can’t understand how some businesses are allowed to be open but others are not. She also says that Garfield County has very low transmission of the virus, so she doesn’t believe that rural counties should be held to the same standard as a region where the virus is widespread.

Boebert, who is running for Congress, posted a video explaining her reasoning:

I’m not going to wait on the government to tell me what to do.

The founders never had asterisks in the Constitution.

If you want freedom, you have to go out and take it!

No one is forcing people to go to restaurants during a pandemic, but they are forcing businesses to close indefinitely with no real indication of what could allow them to reopen. It also seems random that some can open with guidelines in place while others are not.

What do you think of Boebert’s decision to reopen?