On the hunt in Colorado: A successful elk harvest amid downward national trend of youth hunters 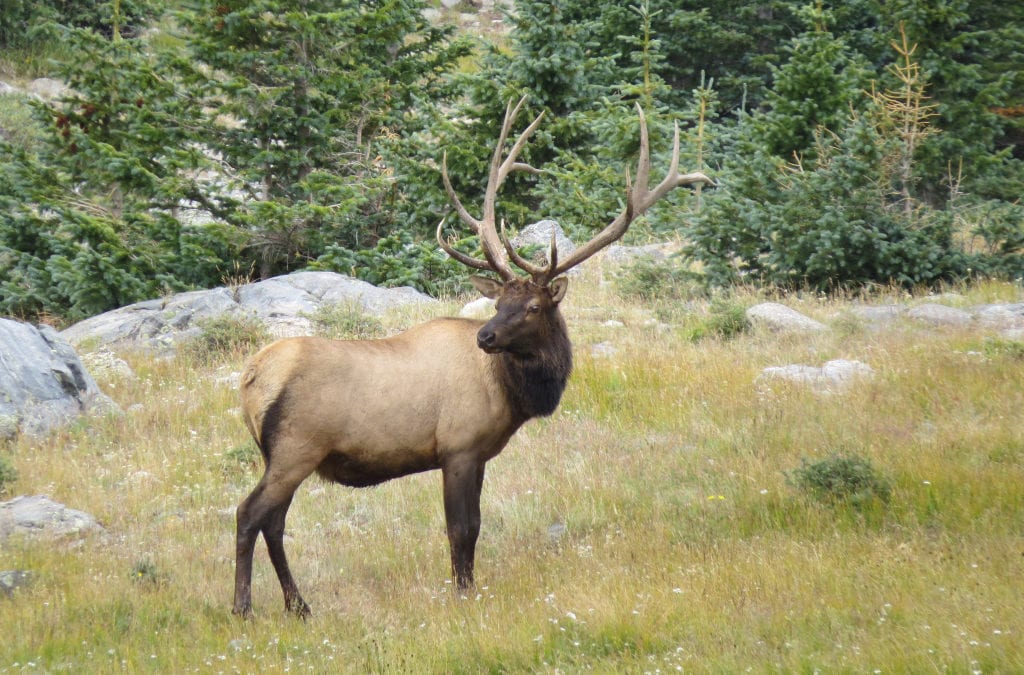 WHITE RIVER NATIONAL FOREST — On the fifth day of the hunt, he appeared before me, crossing a meadow 300 yards downhill between aspen and pine groves, with antlers that cast long shadows on the morning snow. A crown atop the animal king of the Colorado high country.

I’m seated on a ridgeline at 10,000-feet of elevation a month ago on public land when muscle memory calms a surge of adrenaline. The black stock of a 270 Winchester rifle tucks into the crease of my right shoulder. The elk, with long legs carrying his muscular frame and thick brown coat, walks slowly into the view of my scope. A peaceful quiet is about to erupt with a sudden…

Breathe in. Breathe out.

Hot lead fires from a long silver barrel. Seconds pass like minutes. The blast echoes over frozen mountain valleys and a soft breeze carries the scent of gunpowder. My heart races and my eye returns to the scope to find the elk … unharmed. I’ve missed.

A young bull stands frozen in his tracks. His antlers tilt back. He sniffs the cool mountain air.

The hunt is not over.

On this Thanksgiving Day, a time to honor family customs, the tradition of harvesting elk in the Rocky Mountain backcountry is on the decline.

The number of hunters across the nation fell by 2.2 million between 2011 and 2016, according to the most recent findings published by the U.S. Fish and Wildlife Service. The same survey showed the most significant drop among younger hunters, ages 25-34. In 1991, their demographic made up for 28% of all U.S hunters. That millennial portion tumbled to 16% in 2016.

In Colorado, the number of total big-game hunting applications has dropped by 39,119 between 2018 and 2020. It should worry anyone, including non-hunters, who enjoy outdoor space managed by Colorado Parks and Wildlife.

“Hunters and anglers are the primary funders of conservation efforts when it comes to habitat improvement and biological research that’s necessary for healthy wildlife populations across the state,” said Travis Long, CPW’s statewide coordinator for hunter education. “Some of the older hunter population is dropping off and is not always being replenished by the younger hunter population. It has a long-term impact on how we fund our agency as the stewards of wildlife and the habitat for that wildlife.”

Colorado’s big-game hunting also suffered the consequences of an active wildfire season. In 2020, CPW reports it has processed about 12,000 tag refunds with an approximate impact of $3 million. The refund application process remains open.

Last month, as my family started our annual elk hunt, an emergency helicopter flew overhead on our walk up the mountain. It carried a water bucket, presumably empty, for aerial firefighting elsewhere. We needed to be careful in dry conditions, but two days later, our concerns relented.

I can’t tell you my exact location. Call it a well-guarded secret among family and trusted friends.

Just know, that in the mid-1980s, a few Front Range outdoorsmen studied maps of the White River National Forest — a 2.3-million-acre expanse of mountain recreation in Northwest Colorado — for the most remote location to successfully hunt high-country elk.

Their search led to the base of what looks like an extinct volcano, about 2 miles from a dead-end on the nearest public access road, where lava rocks are scattered across rolling mountain meadows, thick timber and steep cliffs. The area is inaccessible to motorized vehicles, so camp is hauled up the mountain in packs or pulled on a wheeled cart. The hunters found refuge inside sleeping bags and a tent, tucked away in the timber near a spring-fed pond for drinking water.

Three decades later — with my father, Dan, among the original members of the hunting party — we return to the same spot each fall for a second-season rifle elk hunt. Our annual commitment, with bare necessities in an unforgiving climate, is a reflection of hunting success. But it’s not our only calling.

My older brother, Matt, shot an elk this year, late in the afternoon toward the end of our family’s hunt. Field dressing a 500-pound animal in nature is difficult. It requires several hands and knives to skin and process the elk into four quarters; including the backstraps, tenderloin and heart. We packed the meat into sanitary bags, placed them in large frame packs, and carried the elk down the mountain. My shoulders ached from the roughly 60-pound pack as we marched through the snow — mentally and physically exhausted. We hadn’t eaten dinner. The temperature dropped.

Funny how no one seemed to mind.

Pink, red and orange colors danced on the horizon that evening before giving way to a full moon that lit our journey back to camp. The white landscape seemed to glow and discomfort gave way to awe. My brother turned to me, my dad, and my stepbrother, Trevor, in the quiet moonlight.

“I’m loving every second of this,” Matt said.

Our bodies hurt. Our brains knew better. My brother spoke for us all.

I rack the empty shell from my rifle, load another in the chamber, and quickly relocate the bull with cautious optimism. The long shot and downward trajectory spooked the elk with no clear direction of the threat. He’s back in my scope…

Breathe in. Breathe out.

There is an initial profound sadness, for me, in the harvest of an elk. They are incredible animals. What provides solace, though, as an omnivore, is the challenge of the hunt, the collective family bond it creates, and the stopping ability of a high-powered rifle. My bull elk took only a handful of steps before dropping to the snow. A clean and quick exit.

We respect his memory by not wasting his gifts. When the coronavirus pandemic subsides, my family will gather for large meals, making up for a canceled Thanksgiving to celebrate togetherness over elk steak. We’ll re-tell stories of the hunt — with details exaggerated more each time — to preserve the feeling we had walking down that mountain in the moonlight. Or the great fortune of a second shot that doesn’t miss.

Colorado is home to one of the nation’s healthiest elk populations with an estimated 287,000 statewide in the winter of 2018, per the state’s latest survey, with 52% of all herds above their target numbers goal. CPW is working actively to engage a younger population with fishing and hunting through outreach programs that connect kids and adults with experienced outdoorsmen and women. Educate yourself on gun safety and hunting laws. Create a memory and fill your freezer.

This Thanksgiving, Coloradans should be thankful for the almighty elk.