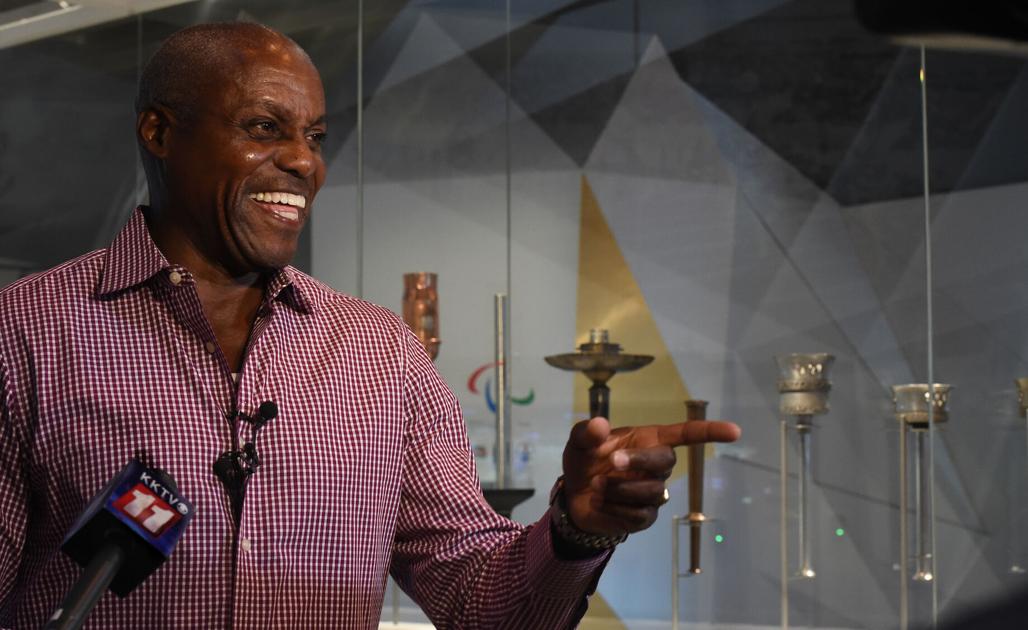 Carl Lewis had no interest in testing one of the U.S. Olympic and Paralympic Museum signature attractions.

“Keep going,” Lewis told his personal guide — fellow Olympian Michelle Dusserre Farrell — late Saturday afternoon as they approached the interactive sprinting exhibit during his first visit to the museum and Hall of Fame that tells the story of the Olympic movement to which Lewis was a central figure for nearly two decades.

During his visit Lewis met with local media, toured the museum with Farrell — a gymnast who captured team silver in 1984 — and attended a donor event also attended by legendary Olympic skater Peggy Fleming.

“I think that’s where it starts is the donors,” Lewis said, noting funding for athletes and for this new Colorado Springs museum.

“They are the ones I want to thank the most.”

Lewis skipped the chance to run on a short track with virtual competition from Olympian and Paralympian sprinters such as Jesse Owens, David Brown and Hunter Woodhall. Lewis, the former world-record holder in the 100-meter has grown used to turning down such challenges.

“I’m asked to race probably on average eight times a week,” said Lewis, who will turn 60 on July 1. “Whether it’s at the airport, the store …”

Besides, he joked, “I was a long jumper.”

Lewis was a runner and jumper and one of the most decorated Olympians in American history. He had qualified as part of the 1980 team before a boycott prevented the U.S. from competing in Moscow. He made his debut in Los Angeles in 1984, winning gold in the 100- and 200-meter sprints, the long jump and as part of the 4×100 relay team. He then took gold in 1988 in the 100 (taking the top spot after Canada’s Ben Johnson failed a drug test) and long jump and added more gold in 1992 (long jump and 4×100) and finally in the long jump in Atlanta in 1996. His total Olympic tally was nine gold medals, one silver.

The International Olympic Committee named Lewis the Sportsman of the Century in 1999.

“No question it’s the longevity,” Lewis said when asked which aspect of his career provides the most pride. “The four gold medals is right there under it. … To make my first team at 18. First gold medal at 23, last at 35. It’s something that is rare and I don’t know if we’ll see it any time soon.”

The museum, he hopes, will help tell his story and the myriad others from the Olympic movement in the United States.

Now as an assistant track and field coach at the University of Houston, he finds the younger generation often lacks historical context when arguing sports. He said the track and field athletes seem to know the history of their own sport, but when it comes to basketball he’s stunned at the lack of knowledge of Bill Russell and the same for Jim Brown in football.

Lewis’ own history is intertwined with this area, which is the longtime home of the United States Olympic and Paralympic Committee. He first visited in 1979 when he was in the process of making his first team, and returned to train at the locally based Olympic Training Center multiple times during his career. His brother and sister-in-law live in the Denver area, and now he has this museum to add another reason to make the occasional visit.

“Colorado Springs itself has been a part of my story a long time,” he said. “I’ve been back to this area many, many times. It will always be a part of me.”

Just don’t ask him to race if you see him in town. He’s finished with that.