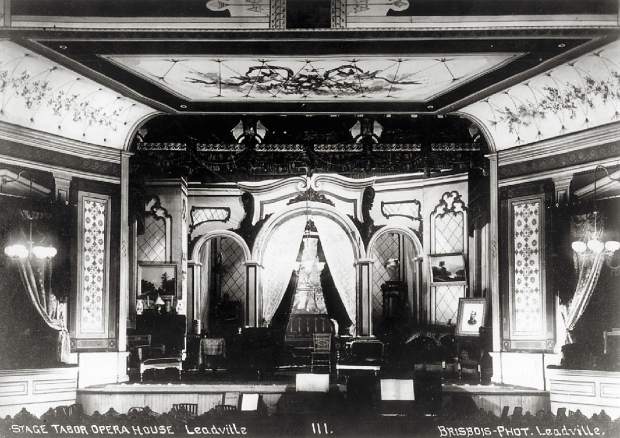 LEADVILLE (AP) — When mining magnate Horace Tabor decided in 1879 that the rowdy silver boomtown of Leadville needed some cultural spiffing up, he built an opera house. In just 100 days, he brought in enough wagonloads of stone, brick and iron over hair-raising mountain passes to erect the massive and elegant three-story Tabor Opera House.

The ornate performance center had all the high-brow accouterments of that era — gas lighting, ceiling frescoes, custom carpets — and magically beautiful, hand-painted curtains and stage sets.

That stage scenery, along with more pieces added in later years, has been moldering in the Tabor attic under layers of coal and bat guano dust for more than a century. But it has recently been brought out of hiding by a historic stage set specialist (yes, there is such a thing) who has been cataloging and studying the stage pieces, and has declared the lot to be the finest collection of stage scenery on the continent.

“This collection could be a real showcase and an extreme draw in North America. It takes your breath away,” said Wendy Rae Waszut-Barrett, the owner of a Minnesota-based company called Historic Stage Services, LLC., the only one of its kind in the country.

Waszut-Barrett has traveled the world as a scholar of historic stage sets, and blogs about her old-theater adventures in Travels of a Scenic Artist and Scholar. She discovered the motherlode of scenery in the highest elevation city in North America two years ago during a road trip with her family.

This year, she returned after being hired by the Tabor Opera House Preservation Foundation to identify exactly what was hiding in the Tabor attic. Waszut-Barrett spoke to Colorado Matters’ Ryan Warner about her findings.

PHOTOS: Click here to see the sets that were uncovered

“Treasures abound,” she said after uncovering hundreds of pieces including screens, roll drops, wings and shutters — all parts that are lowered, raised, snapped together or positioned to flank each other and to create scenic illusions for audiences.

Waszut-Barrett said the large Tabor cache of scenery has helped her to be able to track aesthetic shifts in American theater. She has been able to compare the Tabor’s first 10 stock sets ordered for the new opera house to pieces added before and when the imposing red brick building was purchased by the Leadville Elks Lodge and remodeled at the turn of the 20th century.

In that time, artists who traveled the country painting stage scenery had created new sets for a place that had become known as the finest opera house west of the Mississippi. It drew luminaries like Oscar Wilde, John Philip Sousa, Buffalo Bill, and possibly Harry Houdini. Appropriately, evidence proving the magician’s presence at the theater has vanished.

The Tabor drew raves for its opulence when it sprang up amid Leadville’s saloons and bawdy houses. But it didn’t have an auspicious opening night.

When the doors of the Tabor opened for a performance of a play called “The Serious Family,” there were empty seats. The stage play was competing with a hanging. More Leadville residents chose to attend that.

The opera house had glittering years in the heyday of the mining boom, but Tabor lost his showcase in 1893 when his mining fortune went kaput. The Tabor then went through several other owners until it was sold to the Elks Lodge. The Elks completely remodeled the building and added a complete new set of drop curtains and new set pieces for the stage.

The Elks operated the Tabor through the two world wars, the Great Depression and the advent of moving pictures. But use of the opera house declined, and in 1954 the Elks needed to unload the building. Evelyn Furman, a Leadville businesswoman purchased it. She and her family ran the opera house until 2016 when the City of Leadville bought it.

Through all the changes and struggles, one thing remained; the stage scenery pieces. They kept piling up in the attic — a jumble of sets that could turn a stage into a baronial manor, a forest, a seaside village, a rough-hewn cabin, a mountain meadow, even a jail cell.

These scenes had been painted on fabric screens using paint mixed from dried pigments and a binder derived from animal hooves. Waszut-Barrett said it was amazing that these pieces had never burned up, been water-damaged by leaking roofs or been pitched into the trash. Those things happened at many other historic theaters.

Waszut-Barrett’s scholarly sleuthing into historic stage scenery has found that the artists who did this specialized artwork by painting scenes meant to be appreciated at a distance — not up close — were often internationally recognized artists. They were not viewed as just itinerant tradesmen. Many had trained in Europe in their teens to learn the craft of stage scenery.

One of Waszut-Barrett’s favorite artists was Tignal Frank Cox who left signed pieces in the Tabor. He did one forest scene that included a drawing of his own face peeking out of a knothole. Cox, who was also a theater architect, was what was known as a “lightning artist” — a visiting artist who would perform by doing quick sketches of audience members in addition to painting the stage scenery pieces.

Another scenery artist named Thomas Gibbs Moses drew Waszut-Barrett into her specialty. She wanted to be an actor and a dancer growing up in Crystal, Minnesota, but veered into scenery when a professor at the University of Minnesota talked her into taking an Introduction to Scene Painting class.

She started making a detailed scrapbook focused on Moses. She chronicled his travels and painted scenes based on his diary entries from 1873 to 1934. Waszut-Barrett went on to teach masters-level scene painting, and to start the only company in the country that analyzes appraises, helps to restore and manages historic stage pieces.

Now, the hundreds of historic pieces she and her crew of Leadville volunteers have hauled down from the Tabor attic may become an important part of the Tabor’s future. Waszut-Barrett said she believes they are unusual enough to become a draw for theater buffs from across North America if the opera house chooses to display the scenery. She said they also could be used as showcases in museums and as backdrops for public lectures, musicals and operas.

Mary Ann Graham, the president of the Tabor Opera House Preservation Foundation, which is currently doing a $10 million renovation on the outside of the Tabor, said unearthing the scenery treasures inside is a good complement to that architectural work. Having another draw will hopefully help to keep the theater operating after being shut down for performances during the coronavirus pandemic. Only the popular theater tours have been allowed this summer.

“I think we are going to be deciding what to do because we are just finding out what we actually have,” she said. “I think they are a great resource for this historic theater and for many artists and theater programs across the country. We hope to use them and display them in some manner.”