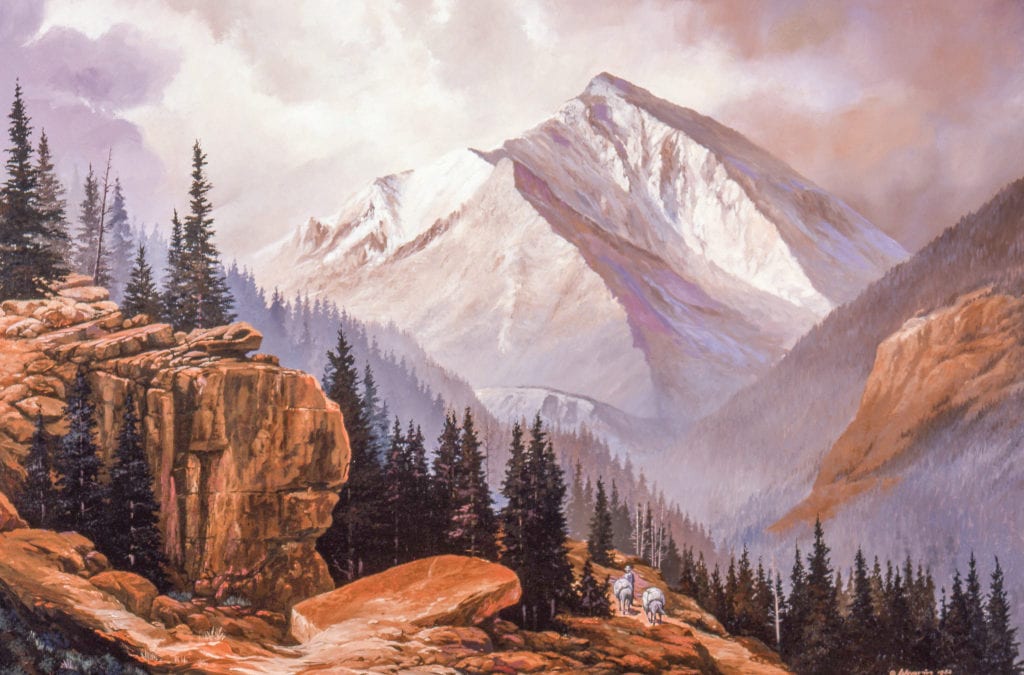 The artwork of a Colorado native who painted American West landscapes for more than four decades has been revived in a newly published book, and the 94-year-old artist is enjoying the newfound notoriety.

Robert L. Wogrin’s oil paintings helped photographer John Fielder include an image of all 58 of Colorado’s 14ers in his latest book “Colorado’s Highest: The History of Naming the 14,000-Foot Peaks,” written by Jeri L. Norgren.

Wogrin began painting landscapes, including Colorado mountains and peaks, in the late 1970s after a career in advertising and architectural art.

“It was all fine and dandy until I began to realize something, I’m not the type of person who could sit around in big groups and kick around ideas,” Wogrin said, with a chuckle, of his business life.

In his painting world, Wogrin would hike and climb to backcountry locations, sometimes accompanied by a family member, where he would draw pencil sketches and take photographs. He often camped, especially at more remote, difficult to reach sites.

“I was interested in the beauty of the mountains,” he said.

Wogrin would transform the sketches and photos at his home and art studio, above Aspen Park in the Hilldale Pines area where the elevation is 8,500-feet. The view from the studio — Mount Evans and north to Longs Peak and beyond — inspired the artist and was an ideal setting from which to paint. An additional bonus of the home studio was that it allowed Wogrin to be close to his wife Irene, and their five children.

“It allowed me to be there when they came home from school,” Wogrin said.

Provided by the Wogrin family

The family enjoyed the Colorado outdoors together, including skiing at Geneva Basin, a now-closed small, family-owned ski area just south of Guenalla Pass. Wogrin’s wife of 66 years, Irene, died in 2019.

“The things we did as a family together, it was a lovely, lovely life,” Wogrin said. “I’ve been very fortunate.”

Fielder, the renowned Colorado photographer and publisher, was working on his book, which included reviewing some 20,000 images, when he realized he was a bit shy of capturing all of Colorado’s 14ers.

“I had about 60% of the peaks,” Fielder said. “To take care of the others, I remembered Bob and his paintings.”

Between Fielder’s photos and Wogrin’s paintings, completion of the book was just two peaks short. Fielder tapped Jon Kedrowski, a Colorado ski mountaineer, to fill in the last two slots. The 160-page coffee table book also incorporates historical sketches made in the 1870s by the artists of the Hayden Survey.

Provided by the Wogrin family

Irene and Robert Wogrin toast their 65th anniversary in August 2018 at the Brown Palace. Irene died in 2019.

“I’ve always been a fan of historical journals and historical arts,” Fielder said. “Bob’s work reminds me a lot of both (Albert) Bierstadt and (Thomas) Moran, without the hyperbole. The light, the moment, the weather is extraordinary.”

Beyond Colorado and the 14ers, Wogrin has painted landscapes across the West.

A 1944 graduate of Manual High School and a 1949 graduate of the University of Denver, Wogrin taught at the Colorado Art Institute. Wogrin’s art gained public attention in 1980 when he produced a poster using his oil paintings titled “Fourteeners Adventure Poster.”

Collectors who have purchased Wogrin’s work include the George Phippen Memorial Museum, Forbes Magazine Collection and the Anschutz Collection. He has received awards from the American Artists Grand National Show and the Knickerbocker Artists Show, both in New York City.

Wogrin, who lives in Littleton, retired from painting about a year ago.

“I no longer have the ability; it’s my hands,” the painter said. “I still have paintings all around me I remember painting, wherever it was. Sometimes I’m tempted to go back to the studio.”