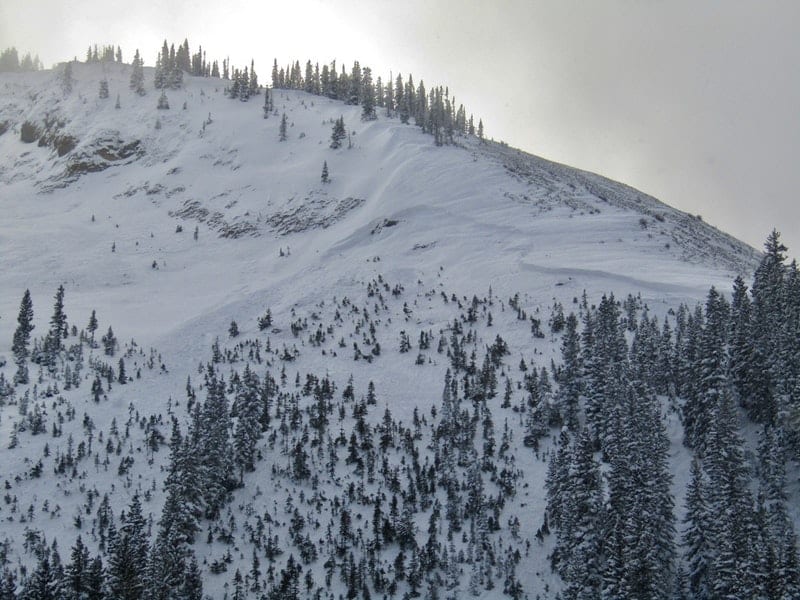 Officials are urging backcountry users to be extra careful this winter after three people were killed in avalanches in southern Colorado this weekend.

A pair of fatal avalanches in recent days has officials concerned that it could be a particularly deadly season in the backcountry. On Friday, Dec. 18, a solo skier was buried and killed in an avalanche in the Anthracite Range, just west of Crested Butte. The next day, two more backcountry skiers were caught and killed in a slide in an area called Battleship to the southeast of Ophir Pass.

The three fatalities already represent half of the six recorded avalanche deaths during the entire 2019-20 season.

“We’re seeing really sensitive avalanche conditions,” said Ethan Greene, director of the Colorado Avalanche Information Center. “Avalanches that are not that big — they’re getting bigger — but they’re really easy to trigger, and I think that’s tripping up a lot of people. It’s very concerning, and it is indicative of an above average year of people getting killed in avalanches. It’s something that I’m very worried about, that we’re all very worried about. We’re all doing our best to make sure that doesn’t happen.”

Over the past decade, Colorado has averaged 5.9 avalanche fatalities a year, according to data collected by the Avalanche Information Center. But Greene said this year already has been troublesome. From Friday, Dec. 18, to Monday, Dec. 21, there were at least 195 avalanches reported, including 68 that were triggered by humans, according to Greene. Nine people have already been caught in slides, including the three individuals who were killed.

Green said the cause is likely a “once in a decade” weak base layer of snow caused by early snowfall in October followed by a dry November.

“That combination of shallow snow and an extended dry period with cold, clear nights produced a really weak underlying structure,” Greene said. “We get this pretty often in Colorado. Almost every year, we have some variation of this. But what we have right now is especially weak. This is probably the weakest the underlying snowpack has been since the 2011-12 season.”

With a weak layer, Greene said it typically takes 6-8 inches of fresh snow and wind to trigger a natural avalanche, but he pointed to a natural slide that was triggered last week on Loveland Pass after just 1 inch of new snow.

Summit County Rescue Group spokesperson Charles Pitman said Monday morning that his team hadn’t been called on any avalanche rescue missions so far this season. The team got its first call later in the day.

Pitman said more calls are just a matter of time as visitors make their way to the county over the holidays.

“Certainly, the traffic is streaming into Summit County, and I expect there’s going to be good use of the backcountry, mainly because there are phases where there will be some nice weather and new snow,” Pitman said. “My anticipation is we could get some calls in the next couple weeks over Christmas and New Year’s. We’re certainly standing by to do everything we can.”

Officials emphasized that while the current avalanche conditions are rated considerable, residents and visitors shouldn’t necessarily be scared off from trying their favorite backcountry activities. Instead, both said recreationists should simply take extra precautions to ensure they’re staying safe.

Because it is an unusual year, Greene said backcountry users shouldn’t rely on their experience or familiarity with certain areas and should consider setting different routes and goals that are safe under current conditions.

Before heading out into the backcountry, individuals should always be sure to check in on the Avalanche Information Center’s backcountry avalanche forecast, which rates the danger on a scale from “low” to “extreme,” along with providing more detailed insights about specific aspects, elevations, weather and more.

The danger level for the Vail and Summit County region is currently considerable near and above the treeline — meaning human triggered avalanches are likely — but recreationists shouldn’t rely exclusively on the forecasts to determine whether a specific area is safe.

“The CAIC gives really good information about general areas, but there are pockets that can be more stable and pockets that can be considerably less stable depending on the exact location,” Pitman said. “People really have to be aware of where they’re going, what the conditions are, and take some snow pits to see how stable or unstable the snow is in the exact area they’re going to ski. They need to be aware of what the weather has been like, the wind conditions over the last few days and more.”

Individuals also should take the time to enroll in an avalanche or backcountry safety course before venturing out into the area’s wilds, and should make sure they’re properly equipped and trained in the use of necessary gear like a shovel, probe and avalanche transceiver. Pitman recommended that backcountry users also pick up a personal satellite tracker, which can send precise coordinates to emergency responders in the event of an avalanche or serious injury.

Each year, the Summit County Rescue Group sets up an avalanche beacon training park in the county to help individuals practice. The park hasn’t been set up this season, but Pitman recommended that backcountry enthusiasts get together with friends to set up their own practice sessions in the meantime. The White River National Forest also recently opened a new beacon training park at the Mountain Meadow Trailhead on U.S. Highway 24 near Minturn.

Individuals heading into the backcountry should pack extra food, water and emergency supplies in case they’re injured and have to wait an extended period of time for help.

“If you get stuck back there, and you get injured and the temperature gets low, do you have food and hydration to hunker down for a few hours until search and rescue gets there?” Pitman said. “Make sure you’re prepared for a longer time in the backcountry than you might think when you first set out. If it takes you an hour to get where you want to ride, it will likely take us an hour, too. And adding on the fact that our members are spread out around the county, by the time we put a call out, grab our vehicles and get to the trailhead to go in, you could be out there for three, four hours or more.”

Backcountry users also should thoroughly plan their trips before heading out to make sure they know exactly where they plan to enter and exit, whether the path crosses any avalanche runout zones and generally what the terrain looks like. Pitman said websites like PowderProject.com and WildSnow.com provide good information about specific ski lines and other educational resources, and he said sites like Google Earth can give a decent initial impression of the terrain.

It’s also vital that individuals heading into the backcountry communicate their plans with others who know where they’re going and when they expect to be finished, along with a courtesy call when they’re done to make sure search and rescue isn’t called erroneously.

Finally, participants must be realistic about their own knowledge and skills in the backcountry and shouldn’t be afraid to turn around if things look risky.

“One of the things we see, sort of like hiking in the summertime, is people set out with a goal in mind to do something regardless of what happens during the day,” Pitman said. “That’s not a very good philosophy if you’re going into the backcountry. Your goal should be to do things safely. If conditions are setting out where it looks like it may be unsafe, don’t keep going. Turn around and go back.”