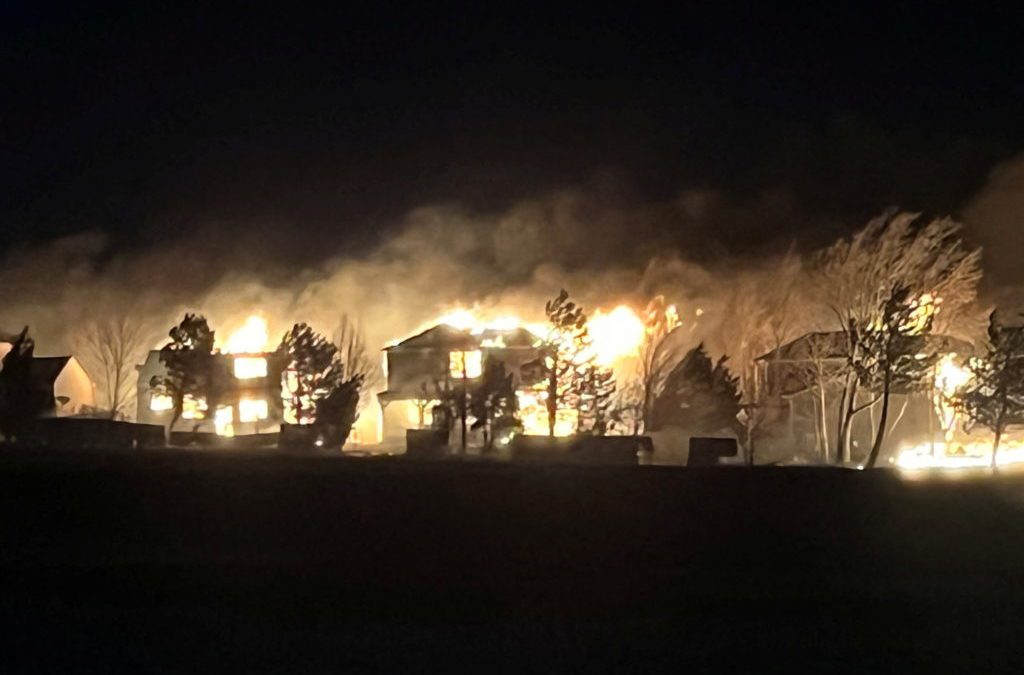 SUPERIOR, Colo. — A Colorado official says nearly 1,000 homes were destroyed, hundreds more were damaged, and that three people are missing after a wildfire charred numerous neighborhoods in a suburban area at the base of the Rocky Mountains northwest of Denver.

Boulder County Sheriff Joe Pelle also said Saturday that investigators are still trying to find the cause of the blaze that erupted Thursday. Officials had previously estimated that at least 500 homes — and possibly 1,000 — were destroyed. They also announced earlier Saturday that two people were missing.

The wind-whipped wildfire blackened entire neighborhoods in the area between Denver and Boulder.

Authorities had said earlier no one was missing in the area hit by Thursday’s blaze, but Boulder County spokeswoman Jennifer Churchill said Saturday that was due to confusion inherent when agencies are scrambling to manage an emergency.

Pelle said officials were organizing cadaver teams to search for the missing in the Superior area and in unincorporated Boulder County. The task is complicated by debris from destroyed structures, covered by 8 inches (20 centimeters) of snow dumped by a storm overnight, he said.

At least 991 homes were destroyed, Pelli said: 553 in Louisville, 332 in Superior and 106 in unincorporated parts of the county. He cautioned that the tally is not final.

The cause of the blaze was under investigation. Pelle said utility officials found no downed power lines around where the fire broke out. He said authorities were pursuing a number of tips and had executed a search warrant at “one particular location.” He declined to give details.

The remains of a vehicle burnt in the Marshall Fire are seen in Louisville, Colorado, U.S. December 31, 2021. REUTERS/Alyson McClaran

The news came as an overnight dumping of snow and frigid temperatures Saturday compounded the misery of hundreds of Colorado residents who started off the new year trying to salvage what remains of their homes.

At least 6 inches (0.15 meters) of snow and temperatures in the single digits cast an eerie scene amid the still-smoldering remains of homes. Despite the shocking change in weather, the smell of smoke still permeated empty streets blocked off by National Guard troops in Humvees.

At least seven people were injured in the wildfire that erupted in and around Louisville and Superior, neighboring towns about 20 miles (32 kilometers) northwest of Denver with a combined population of 34,000. More than 500 homes were feared destroyed.

The blaze, which burned at least 9.4 square miles (24 square kilometers), was no longer considered an immediate threat.

Families forced to flee the flames with little warning began returning to their neighborhoods Friday to find a patchwork of devastation. On some blocks, homes reduced to smoking ruins stood next to ones practically unscathed by the fires.

Cathy Glaab found that her home in Superior had been turned into a pile of charred and twisted debris. It was one of seven houses in a row that were destroyed.

“The mailbox is standing,” Glaab said, trying to crack a smile through tears. She added sadly, “So many memories.”

Despite the devastation, she said they intend to rebuild the house she and her husband have had since 1998. They love that the land backs up to a natural space, and they have a view of the mountains from the back.

Rick Dixon feared there would be nothing to return to after he saw firefighters try to save his burning home on the news. On Friday, Dixon, his wife and son found it mostly gutted with a gaping hole in the roof but still standing.

“We thought we lost everything,” he said, as he held his mother-in-law’s china in padded containers. They also retrieved sculptures that belonged to Dixon’s father and piles of clothes still on hangers.

As the flames swept over drought-stricken neighborhoods with alarming speed, propelled by guests up to 105 mph (169 kph), tens of thousands were ordered to flee.

With some roads still closed, people walked back to their homes to get clothes or medicine, turn the water off to prevent the pipes from freezing, or see if they still had a house. They left carrying backpacks and pulling suitcases or wagons down the sidewalk.

David Marks stood on a hillside overlooking Superior with others, using a pair of binoculars and a long-range camera lens to see if his house, and those of his neighbors, were still there, but he couldn’t tell for sure whether his place was OK. He said at least three friends lost their homes.

He had watched from the hillside as the neighborhood burned.

“I’ve never seen anything like that. … Just house after house, fences, just stuff flying through the air, just caught on fire.”

President Joe Biden on Friday declared a major disaster in the area, ordering federal aid be made available to those affected.

The wildfire broke out unusually late in the year, following an extremely dry fall and amid a winter nearly devoid of snow until the overnight snowfall.

Superior and Louisville are filled with middle- and upper-middle-class subdivisions with shopping centers, parks and schools. The area is between Denver and Boulder, home to the University of Colorado.

Ninety percent of Boulder County is in severe or extreme drought, and it hadn’t seen substantial rainfall since mid-summer. Denver set a record for consecutive days without snow before it got a small storm on Dec. 10, its last snowfall before the wildfires broke out.

Bruce Janda faced the loss of his Louisville home of 25 years in person Friday.

“We knew that the house was totaled, but I felt the need to see it, see what the rest of the neighborhood looked like,” he said. “We all know each other and we all love each other. It’s hard to see this happen to all of us.”