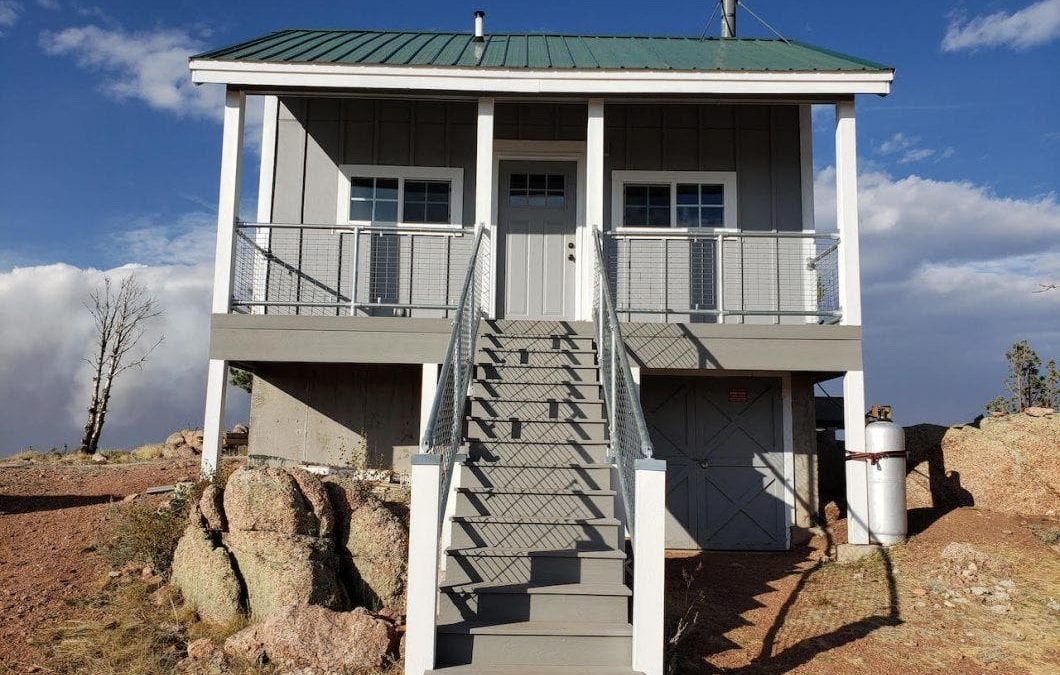 This journey started in 2006 when my wife and I purchased 35 acres of remote land near the Colorado/Wyoming border.  My initial plan was to build this kit

My first of many mistakes was purchasing this before finding out what my county would allow to be built in this area.  This precut lumber package needed to be engineered to withstand a three-second wind gust of 130mph and 30lb/sq ft snow load.

Needless to say, I owned this kit and in order to legally use it I had to hire an architect and have him redesign it to meet the wind and snow load requirements.  It ended up needing almost double the amount of lumber and now wasn’t an easy job for a DIY project.

I ended up hiring a framing contractor to adapt and use as much of the kit and add a substantial amount of new lumber.  The dried in build took about 3 weeks for one good framer to complete the shell of the cabin in 2008.

This pic was taken after the first winter of 2008/2009.  Notice the torn metal roof on the right front corner of the cabin.  The winter winds must have been strong but we also learned that there were not enough fasteners to keep the roof metal from lifting up.  In addition to metal roof damage,  some of the board and batten siding was torn off.

The original windows and door had single pane glass so we decided to strip the original board and batten siding and replace the windows and doors with double-pane vinyl sliders and a steel insulated front door.  Here is a picture of that completed redo summer of 2009.

Then many years went by with nothing of significance taking place on the inside of the unfinished cabin.  Then in the summer of 2017, we hired a plumber to rough plumb and an electrician to wire the cabin and install a 1.2KW solar array with 8 large deep cycle 6-volt batteries.

Nothing really happened in 2018 but in 2019 we installed a Murphy bed/loveseat combo, Ikea kitchen cabinets and had a quartz countertop installed.

And finally this summer 2020 we completed the interior trim and final plumbing and repainted the exterior.  The wood porch and stair railings had taken quite a beating so they were replaced with galvanized piping and welded wire infill.

Written and built by Kurt Kniegge