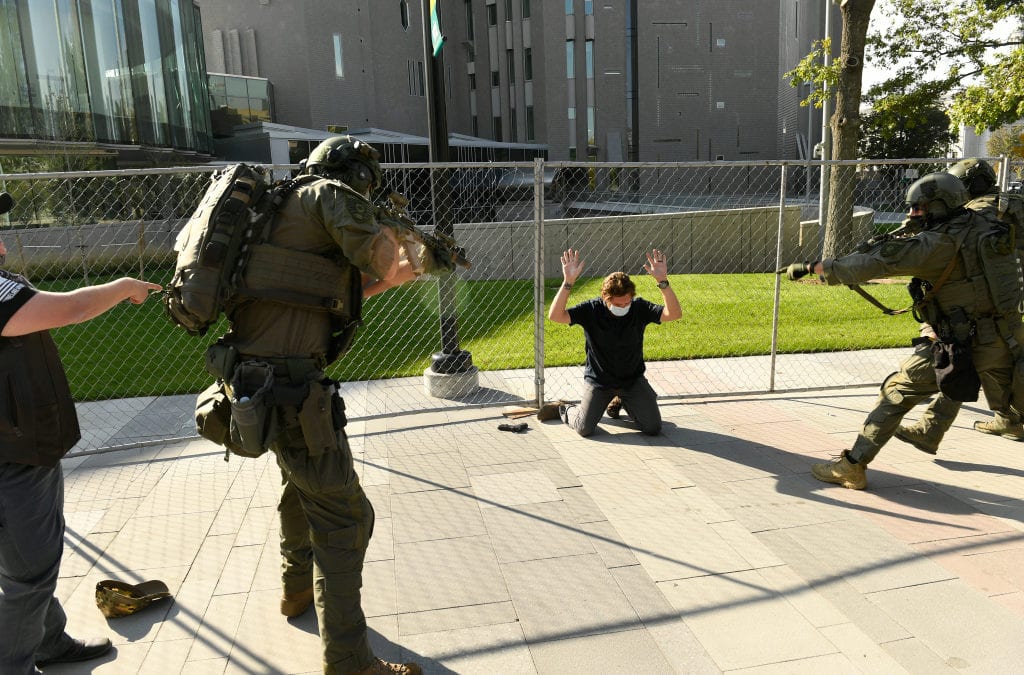 To provide manicures in Colorado, nail salon workers must give state licensing officials proof of training, pass a two-part test, report any felony convictions, apply for a state license and renew that license every two years.

To work as a security guard in much of Colorado, a person doesn’t have to do any of that.

Colorado is one of nine states that do not regulate security guards or security companies, meaning there are no statewide training or hiring standards for the thousands of people who work in quasi law enforcement roles guarding buildings and people across the state. Even when security guards are armed, they’re not required by the state to have any qualification beyond what allows them to carry the weapon as a citizen.

“It’s not a well-regulated industry at all and the training standards are varied at best,” said Paul Taylor, an assistant professor at the University of Colorado Denver who studies policing and previously worked as a police officer, police trainer and, briefly, a private security guard. “Many companies have a really low level of training even though many guards have pretty regular contact with the public in an enforcement capacity.”

After a summer of protests about police and criminal justice, the fatal shooting last weekend of a demonstrator at a Denver “Patriot Rally” by an unlicensed security guard has thrust private security companies into the spotlight.

In the absence of state regulation, it’s difficult to know how many security guards are working in Colorado, what their training and qualifications are, how many times they’ve used force against someone and what discipline, if any, has been enacted against guards who break company rules. Because the guards are employed by private companies instead of a government, the public’s ability to inspect records about the actions and qualifications of guards is limited.

Licensing itself isn’t a foolproof method of avoiding risk, however, as the “Patriot Rally” shooting and the near-fatal beating of a Denver artist by licensed private security guards at Union Station show.

Denver police officers and city inspectors regularly ask for guards’ licenses and the city is always looking for ways to strengthen its oversight of guards, said Eric Escudero, spokesman for the Denver Department of Excise and Licensing.

“The goal is to hopefully prevent an instance like what happened this weekend from ever happening,” he said.

A patchwork of regulations

Without statewide rules, a handful of cities in Colorado enacted their own licensing process for guards or the companies that employ them.

Six of the 10 largest cities in Colorado — Aurora, Fort Collins, Lakewood, Thornton, Arvada and Centennial — do not require licensing of security guards or security companies. The four that do — Denver, Colorado Springs, Westminster and Pueblo — each have different requirements and levels of oversight.

“You hope that a silver lining of this very tragic situation that occurred is that it raises awareness of this licensing requirements and why Denver has some of the strictest rules in the nation,” Escudero said.

The duties of guards in the city vary widely, from keeping an eye out for shoplifters at the mall to patrolling downtown. Guards, like police officers, often face dangerous situations and complicated decisions, Escudero said. At least two security guards have been killed on duty in Denver in the past three years.

Some much smaller towns also have licensing requirements, like Greenwood Village in Denver’s southern suburbs. Police Chief Dustin Varney personally reads every licensing application that crosses his desk. Security companies in the town of 15,700 are required to submit a list of employees, any gun being used by guards, and any cars being used for security purposes. Varney then backgrounds all the people, cars and guns.

“Anytime you are providing a service that involves security for people or property, and you are potentially allowing them to be armed with mace or a firearm, you’re putting people in position to make decisions that can have great impacts on peoples’ lives,” Varney said. “You have to vet it. I have to make sure the company is legit because it impacts the citizens that I swore oath to protect.”

Of the large Colorado cities that require licensing, only two mandate a specific number of training hours and required training topics. Colorado Springs requires eight hours of training before a guard is licensed and Denver requires 16 hours before licensing, as well as eight additional hours every year. Both cities require further training for a guard to carry a gun.

But even the 16 hours of training required by the Denver licensing office for unarmed guards — the most required in any of Colorado’s large cities — is nowhere close to the 556 hours of academy training that all Colorado law enforcement officers must complete.

It’s unclear what kind of training Matthew Dolloff — the unlicensed security guard who will be charged with second-degree murder in the shooting of Lee Keltner — had. Dolloff’s family attorney has said the shooting was an act of self-defense.

Denver television station 9News contracted with security company Pinkerton to guard their journalist covering protests. Pinkerton then contracted another company, Isborn Security Services, which offered Dolloff, 30, the gig. Pinkerton did not respond to questions from The Denver Post about Dolloff’s training and 9News has not responded to requests for interviews.

Matt Isborn, owner of Isborn Security Services, released a statement defending Dolloff’s actions as “strictly defensive in nature.” He said he’s hired Dolloff as an independent contractor for multiple security jobs since August 2019. The statement, however, did not address Dolloff’s lack of a license.

Training and hiring standards also are at the center of a lawsuit against the Regional Transportation District and Allied Universal Security, one of the largest security companies operating in Denver, after one of their guards in 2018 beat Denver artist Raverro Stinnett, who was waiting for a train at Union Station. Three other guards knew about the beating, which left Stinnett with brain damage, and did not intervene or report the incident, according to the lawsuit.

Three of the security guards involved pleaded guilty to criminal charges in connection with the incident, but the city did not revoke the company’s license to operate in Denver.

Several Colorado security companies and industry organizations did not respond to requests by The Denver Post for interviews about training standards and hiring standards.

A glimpse into guards’ use of force

The fatal shooting of Keltner, 49, after the “Patriot Rally” in downtown Denver on Oct. 10 was not the first time private security clashed with protesters this year, city documents show.

Three security guards standing at the corner of Colfax Avenue and Pearl Street engaged with a group of protesters marching on May 30 when members of the group began tearing down a fence across from the apartment building they were guarding.

One of the guards, who worked for Helix Technologies, threw a pepper spray grenade into the crowd, documents reporting the incident show. Members of the crowd then threw rocks and bottles at the group of guards, who responded with more pepper spray. One Helix guard then drew his gun and pointed it at the crowd, according to the reports.

“This only escalated the situation to the point where it was no longer a controllable situation,” one of the guards wrote in his report. “Rocks, bricks, bottles and other miscellaneous items were thrown at the onsite personnel in rapid succession.”

The guards fled, but not before one was hit in the head with a rock and another was injured on his leg. Police responded to the scene and dispersed the crowd with flash-bang grenades, tear gas and pepper balls, the reports state.

In Denver, it’s possible to know about this incident because the city requires security guards report all uses of force to the licensing department. No other large city in Colorado requires such reports.

But there are no specific policies or standards that Denver officials use to decide whether a use of force was warranted.

“This is another area we are looking at closely to see if there are improvements that can be made,” Escudero said. “However, it is important to note that widely recognized use-of-force standards frequently change, so Excise and Licenses believes it is important to have flexibility by not having it written in ordinance.”

Since licensing requirements were strengthened in November 2018, Denver security guards have reported 13 uses of force, city records show. Allegations of excessive force can trigger an investigation into an incident and, if substantiated, cause a guard to lose his or her license.

Of the 6,500 security guards in the city, five have been ordered to appear at a hearing for alleged misconduct or violation of rules since November 2018, when Denver changed its licensing rules.

Two of those cases involved use of force. The city suspended one guard’s license for six months after he accidentally fired his gun in the bathroom of a marijuana dispensary he was guarding. Another guard’s license was revoked after he pointed a gun at a man while on duty and then called police and falsely reported the other man pointed a gun at him. Denver police officers found security footage that showed the guard pointing the gun at the man, who did not draw a weapon, for at least three seconds.

Without state regulation, it would be difficult for governments and companies to track guards with a history of misconduct or other troubles on the job, Taylor said. While state officials are working to keep problem police officers from hopping agencies to escape punishment, there’s no system in the corporate realm to keep problem guards from transferring around.

“Those standards don’t exist in private security,” he said.