No gains made on Blodgett Peak fire, pre-evacuation orders for some Colorado Springs residents 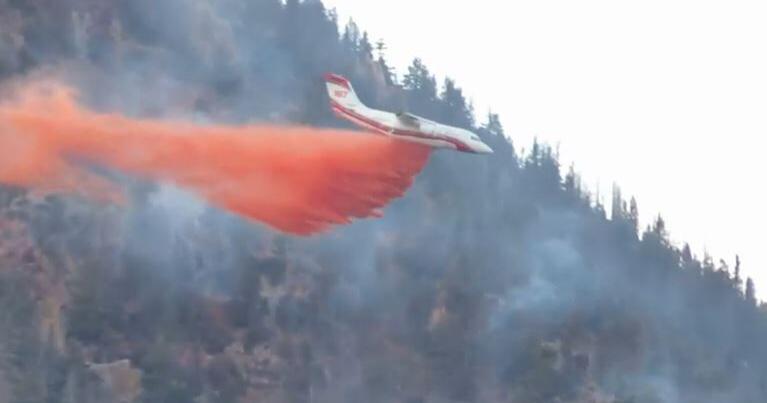 Firefighters haven’t made gains in the Blodgett Peak fire, which flared up just west of the Air Force Academy, prompting a pre-evacuation order to go into effect Wednesday.

Colorado Springs firefighters responded to the fire around 5:30 a.m. Wednesday, and crews spent most of the day attempting to construct a handline to contain the fire. By the end of the day, department spokesman J.J. Halsey said, the crews were unsuccessful in constructing the handline, and hadn’t made any progress in containing the fire, which he said was estimated at around three-tenths of an acre. He added that emergency officials are waiting for aerial images, so a more accurate size can be determined.

Halsey said that efforts to contain the fire would continue in an extended operation, which on Wednesday looped in at least two aircraft to drop fire retardant on the blaze, that could take days and further crews from the U.S. Forest Service. He added that firefighters would be on scene overnight.

#BlodgettPeakFire Air tanker drops on the fire successful this afternoon. CSFD brush patrols will be in the area overnight. Active flames may be visible throughout the night, please don’t call 911, we have crews on scene monitoring. Please avoid the area. pic.twitter.com/6swXr0CqxG

Firefighters had an arduous journey getting to the fire, Halsey said, which sparked on Blodgett Peak at roughly 9,100 feet in elevation.

Because of the rocky, dangerous terrain, it took firefighters roughly two hours to hike into the area just to get a look at the fire, which they quickly determined was made up of one large fire and around three other spot fires “on the perimeter of the main body.”

The fire, he said, had “potential” because of the lack of moisture and humidity, as well as warm temperatures and heavy timber in the area. Halsey added that Wednesday’s winds, while not forecast to be as severe on Thursday, created a “bad mix” for the fire, but said that that the fire wasn’t currently spreading rapidly.

“It’s just so dry up there, once it gets up into the trees, it does light off fairly spectacularly, but then it dies down and then starts creeping again,” he said. “Obviously, if we weren’t to do anything, it would become an issue, but that’s why we’re working hard to contain it.”

He said that in part because investigators couldn’t access the fire, a cause hadn’t yet been determined and was under investigation.

The pre-evacuation order issued just before 11 a.m. includes the area west of Woodmen Road near Blodgett Drive, and the Peregrine neighborhood.

This Pre-Evacuation Warning is for the area West of Woodman Rd off of Blodgett Dr. This is to notify of a fire on Blodgett Peak https://t.co/tgAjiYh8Aj

As of about 3:30 p.m., Blodgett Peak Open Space and trail system is closed “for the next few days, for sure,” Halsey said. All visitors are asked to stay clear of the area until it’s deemed safe to open.

Drones have been spotted above the fire, according to the fire department. They have requested that all drones be grounded.

“If you fly, we can’t,” the fire department said in a tweet.