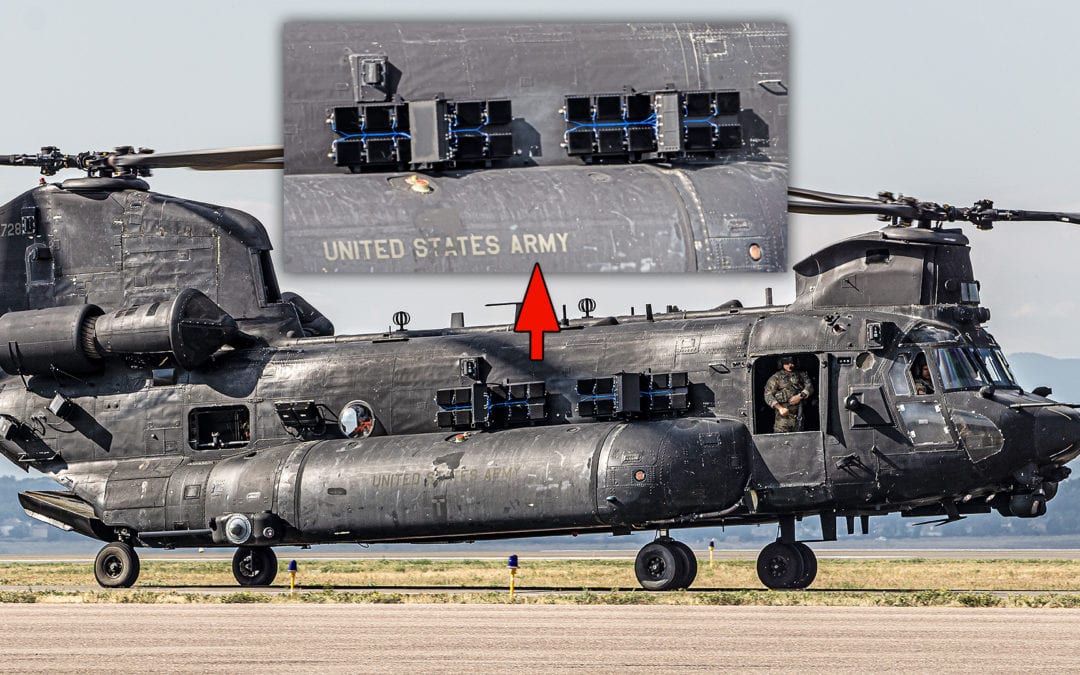 The 160th Special Operations Aviation Regiment (160th SOAR), better known as the Night Stalkers, have been sporadically executing some high-altitude training out of Colorado’s Rocky Mountain Metropolitan Airport (KBJC) over the last couple of months. These flights have mainly involved the unit’s highly modified MH-47 Chinooks, a type that is renowned for its high-altitude capabilities. Now, some of the aircraft used for these operations have emerged with a mystery alteration made up of arrays and boxes that line the upper mid-sections of their fuselages.

Aviation Photographer Memphis Larson, who goes by the handle @121.700 on Instagram, has been watching the Chinooks come and go from the area in recent weeks and immediately noticed this new modification when it appeared on August 6th. Larson tells The War Zone:

The three MH-47Gs from the 160th SOAR showed up first at Rocky Mountain Metropolitan Airport (KBJC) on June 11th, 2020, and then popped in and out for the next few weeks, once hauling a wooden crate. On August 3rd, they arrived once again along with two CH-47Fs from the 2nd Battalion, 227th Aviation Regiment, and they flew routine flights for a couple of days.

On August 6th, they pulled one of the CH-47s (08177) off of the main ramp back into the hangars, and when seen taxiing out it had the black boxes attached to the sides. After a quick flight, they went back into the shelter of the hangars. The next day, one MH-47 took off and returned as they towed another MH-47 (03728) back next to 08177. Finally, on August 8th, all five took off again, and the modified Chinooks taxied out of the hangars onto a runway and left mixed with the three “normal” Chinooks.

It isn’t clear if the famed special operations unit is working with 2nd Batallion, 227th Aviation Regiment or if they are borrowing some of the unit’s CH-47F helicopters for these operations. The 160th has borrowed helicopters for operations in the past, including in warzones overseas. These aircraft don’t feature most of the MH-47’s extensive self-protection, sensor, communications, and infrared suppression modifications, but a Chinook is a Chinook and the “Foxtrot” model is the newest variant available. It’s also worth noting that the MH-47s being used by the 160th SOAR for these drills do not have their big refueling probes mounted.

Each mystery modification includes a dozen panel-like square arrays wired together with a rectangular box-like structure mounted at an angle at its center. Two of these installations are seen on the side of two Chinooks, one an MH-47 and the other a CH-47. They are mounted through the cabin on cross-beams, using the aircraft’s removable windows as an aperture. We have never seen a system like this on a Chinook and it isn’t clear if it is infrared countermeasures, navigation, communications, or electronic warfare related. Our best guess would be the latter, but clearly it is made to be installed on any Chinook with its modular format. This kind of electronic warfare system concept is not unheard of on special operations helicopters.

The 160th SOAR is known to frequent Colorado for training due to its high elevation that is similar to what crews could face overseas. Density altitude impacts helicopters significantly, especially those laden with commandos and their gear that have to make hard maneuvers into tight landing zones. So, the unit’s presence at KBJC isn’t a surprise, but what appears to be the testing of a new external modification is.

As for the tests or use of this previously unknown equipment, it isn’t like the Night Stalkers, which are notoriously shy, are trying to hide anything. They are flying with it in broad daylight at a public airport that they have been frequenting for weeks.

We will update this post with new information as we get it.