Nice Person or Not, RBG’s Dissent in Masterpiece Cakeshop v. Colorado Showed a Tolerance for Fascism 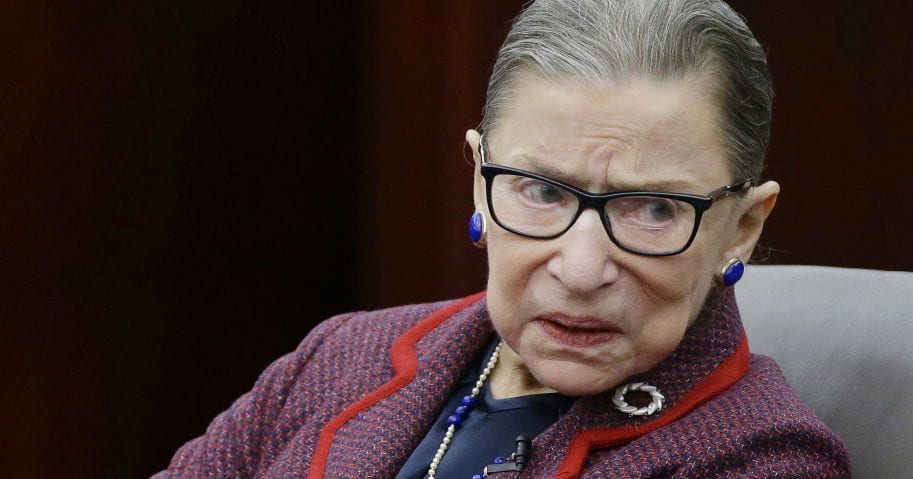 When the U.S. Supreme Court forced all states to legalize gay marriage via its 2015 Obergefell v. Hodges ruling, the media and the left scoffed at the idea that this would threaten anyone’s rights. It would allow gay people to marry each other, they assured us, but it was no threat to your marriage or to anything else about your life if you opposed gay marriage.

It only took three years to find out this was not true.

When Jack Phillips of Colorado-based Masterpiece Cakeshop was asked in 2016 to bake a wedding cake for two men, he refused on the basis of his Christian beliefs that marriage in God’s eyes could only be between a man and a woman. Phillips did nothing to try to stop the two men from getting married. He simply declined to participate in the process. What’s more, he indicated he’d be happy to sell them any other kind of product, but that he could not and would not bake them a wedding cake because to do so would be to celebrate something the Bible said was detestable before God.

We wrote at the time about the danger inherent in forcing people to join the celebration of something they did not believe was right. This was and is fascism, we said. When the state can force you to use your creativity to express an idea you oppose, and threaten to take your business if you refuse, we have entered an era in which we’ve accepted fascism in the service of an agenda.

The Colorado Civil Rights Commission ruled against Phillips, but he won easily at the U.S. Supreme Court. It was so clear that the Constitution was on his side, even liberal Justices Stephen Breyer and Elena Kagan (who is a lesbian, by the way) joined in a 7-2 ruling that upheld Phillips’s right not to be forced to bake the gay wedding cake.

But Ruth Bader Ginsburg was one of two Justices to dissent. And when you read her dissent, you quickly realize that this woman – who’s being so lionized today as a hero of all that is good and right – was actually willing to twist the law into a pretzel to deny Jack Phillips his constitutional rights.

Ginsburg attempted to do so by trying to attack the obvious contrast between the Phillips case and the case of a man named William Jack. Jack had approached a number of bakeries asking them to put biblical messages on cakes, including the message that “God hates sin” and several others along those lines. Three bakeries declined to add the messages Jack requested, prompting him to complain to the Colorado Civil Rights Commission. The Commission ruled that the bakeries could not be forced to add messages to cakes they found offensive or abhorrent.

Yet in the case of Jack Phillips, the same group thought it was fine to force a baker to add messages he found abhorrent. The difference clearly was that, in the case of William Jacks, the commission members agreed with the bakers’ point of view. In the case of Jack Phillips, they did not. There was no legal principle involved. It was all about personal opinions and preferences, which is why the Supreme Court threw out the Colorado ruling 7-2 and found in favor of Phillips. This was so obvious you would think no one could argue with it, especially considering the threat any other ruling would pose to First Amendment rights.

But Ginsburg did argue, and quite vociferously:

The Court concludes that “the Commission’s consideration of Phillips’ religious objection did not accord with its treatment of [the other bakers’] objections.” But the cases the Court aligns are hardly comparable. The bakers would have refused to make a cake with Jack’s requested message for any customer, regardless of his or her religion. And the bakers visited by Jack would have sold him any baked goods they would have sold anyone else. The bakeries’ refusal to make Jack cakes of a kind they would not make for any customer scarcely resembles Phillips’ refusal to serve Craig and Mullins: Phillips would not sell to Craig and Mullins, for no reason other than their sexual orientation, a cake of the kind he regularly sold to others.

When a couple contacts a bakery for a wedding cake, the product they are seeking is a cake celebrating their wedding—not a cake celebrating heterosexual weddings or same-sex weddings—and that is the service Craig and Mullins were denied. Colorado, the Court does not gainsay, prohibits precisely the discrimination Craig and Mullins encountered. Jack, on the other hand, suffered no service refusal on the basis of his religion or any other protected characteristic. He was treated as any other customer would have been treated—no better, no worse.

This is astonishingly dishonest, and demonstrates a clear hostility toward the Christian faith, even to the point that Ginsburg was willing to completely twist the issue and her understanding of it to get to the anti-Christian result she wanted.

That started with Ginsburg’s decision to completely ignore the main issue: Phillips didn’t sell off-the-shelf wedding cakes. His wedding cakes were personally designed by him and involved an expression of his own creativity. When I’ve written about this case in the past, I’ve sometimes considered a scenario in which I, as a writer, would be asked by a gay couple to write a poem to be recited at their wedding.

You might say, well, you can just write a poem about marriage and never refer to gay marriage, but that’s a ridiculous argument. It is a gay marriage. That’s the whole point. Forcing a poet to write a celebration of that, against his own beliefs, is a blatant violation of First Amendment rights both to free speech and freedom of religion. Forcing a baker to do the same amounts to nothing less.

Yet Ginsburg was willing to pretend this was no different from selling Craig and Mullins a bag of chips or a bowl of soup (both of which Phillips would have been happy to do).

That is an absolutely terrifying view of how the law should be applied in the United States of America – one that even two of her liberal colleagues were not prepared to embrace. But she did.

Ruth Bader Ginsburg may have been a very impressive woman who achieved a great deal and was worthy of respect. But she was not a good Justice of the Supreme Court if she was willing to trash the rights of Americans, even to the point of forcing them to celebrate things that violate their beliefs and principles.

I am sorry she died and I wish she had not, because nothing I’m writing here justifies wishing for a person’s death. But now that it will be necessary to replace her, the best thing for the country would be for her to be replaced by someone whose legal thinking is as unlike hers as possible. The protection of the rights of the American people requires us to oppose the legal thinking of Ruth Bader Ginsburg.

The post Nice Person or Not, RBG’s Dissent in <i>Masterpiece Cakeshop v. Colorado</i> Showed a Tolerance for Fascism appeared first on The Cain Gang.