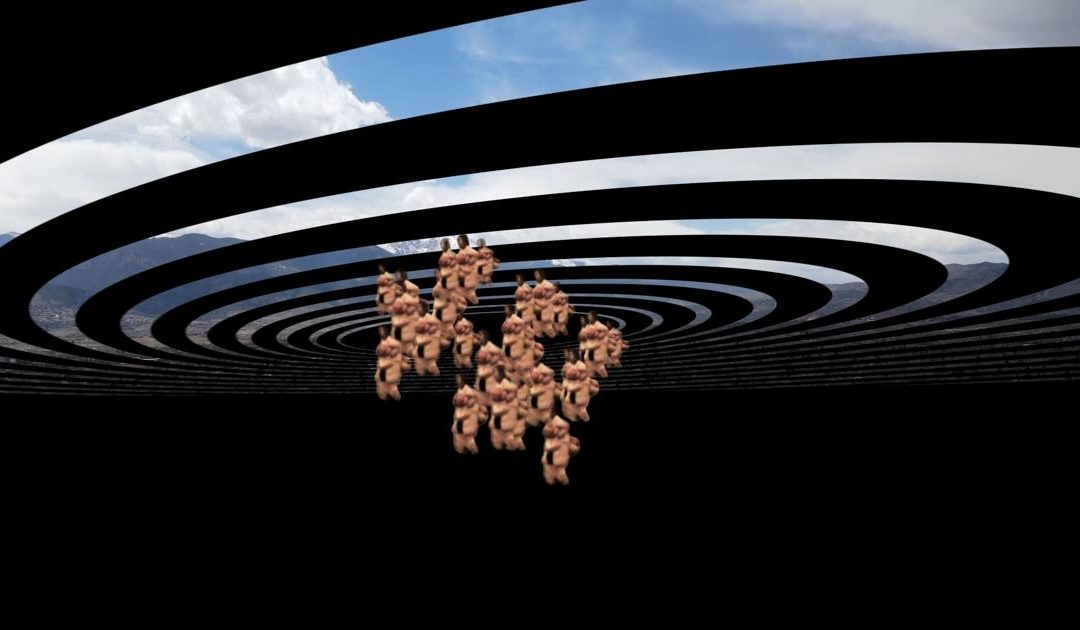 Growing up in Denver, Annette Isham was fed a steady diet of pioneer history and romantic notions of the West.

And of course, those Rocky Mountains always loomed in the background of everyday life.

How did that landscape inform her identity — a woman of mixed race who was born in the Dominican Republic and moved to Colorado when she was 1? And how could she add her history to the masculine myth of the American West?

About five years ago, she created a character for herself named Venus. She put on an elaborate costume and programmed her drone to record her performing as Venus. Now she’s taken the Venus form and worked it into animation. Her new installation, “Venus: A Space to Hold, Redeemer, I,” features a feminine-shaped brown blob that she’s inserted into three new videos featuring a Colorado Springs neighborhood and the Rocky Mountains.

“It was a way of grappling with how a person of my background and race fits into this landscape,” said Isham, who also teaches 4D and animation at Rocky Mountain College of Art + Design in Denver. “It’s not like I’m a cowboy. I don’t have a romantic history with the landscape, so I developed a mythical being who can travel in and out of time.”

To view the videos, you must download the Popwalk app and head to The Yard, an outdoor project space and site for public art in the downtown Divine Redeemer neighborhood.

The exhibit space is in the front yard of Jessica Langley and Ben Kinsley’s home, a couple who has made a regular habit over the last three years of filling the space with eye-catching and eclectic work by artists from around the world.

(You can see photos of past exhibits online at whatsintheyard.com.)

Enter the coordinates 38.847596,-104.799216 into the app, head to the location, and unlock Isham’s first video. You’ll see the migration of the Venus character through different perspectives of the neighborhood and mountain range. The second and third videos will take the viewer through the streets to Divine Redeemer Catholic Church.

Isham hopes the videos help people reflect on their environment and landscape. For her, it was reassembling the myth of the West in a way that felt more accessible.

“I thought of it like a masculine thing to conquer the West. If you could, you could achieve manhood,” she said. “I wanted to provide a character like me, as a mixed-race woman.”

The Yard also will feature a second installation, “The Infinite Lawn,” by Los Angeles-based artist Jody Joyner. Salvaged scraps of artificial grass placed over the facade of the house will be paired with video projections showing up-close footage of blades of grass. It runs through Oct. 31.

“The fuzz on a discarded tennis ball becomes hairy, each bristle of a dandelion seed can be seen in full relief, and the brown thatch underneath blades of grass becomes an ecosystem in and of itself,” reads the installation’s description. “In the two-channel video projection, these and other found subjects will be viewable at an architectural scale.”