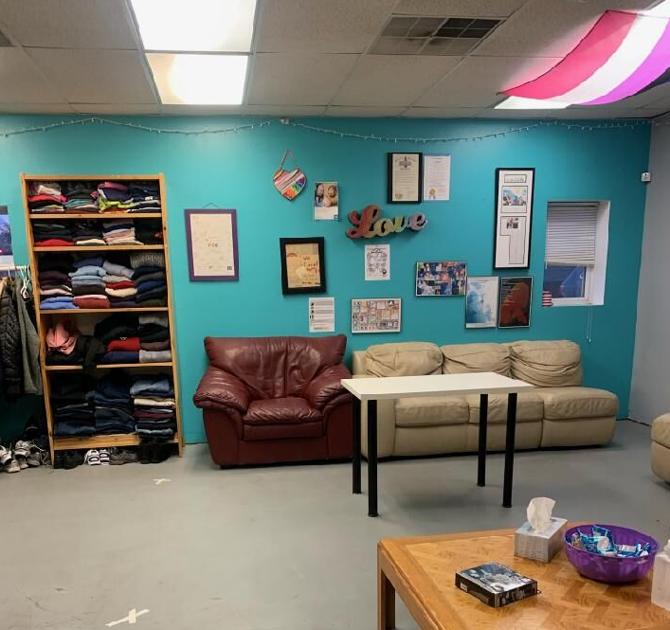 The new Youth Winter Drop-In Center is being offered in partnership with Inside/Out Youth Services, which serves LGBTQ+ teens.

It’s a spot for youth to hang out, get warm, pick up basic supplies including gloves and socks, talk with case managers and mental health clinicians about their situations, and potentially work toward re-housing.

Users can grab a bite to eat, sit in a comfortable chair, use a computer to connect with family or look for a job, and just chill.

“Youth deserve a place to get out of the cold,” said Shawna Kemppainen, executive director of The Place, formerly known as Urban Peak of Colorado Springs.

Since the center opened last Thursday, 11 youth have used it, including one person who entered The Place shelter after finding out about it while at the drop-in center, Kemppainen said.

With the coronavirus pandemic limiting access to most places teens would normally find relief from the streets, such as libraries and soup kitchens, the space is one of the few safe, indoor places where young people can go in the daytime, Kemppainen said.

Youth surviving outside tend to stay in smaller groups or as individuals rather than at large encampments where adults congregate, she said.

However, since the pandemic, The Place’s street outreach team is seeing more young people living in camps along Fountain Creek or other waterways. Youth also spend the night in parks, alleyways, abandoned buildings or cars, and under bridges, Kemppainen said.

The Place has 20 beds for homeless youth ages 15 to 20 and this time of year has just a few beds open each night.

“The raging pandemic, dropping temperatures, and limitation of services and space mean young people experiencing homelessness right now are at dire risk of disease, increased vulnerability to assault or human trafficking, and freezing before they find the right help,” Kemppainen said.

Living on the street is miserable, said Pearrajeane Hall, who goes by P.J.

There’s really no other word for it, said the 22-year-old from Colorado Springs, who has been homeless off and on since age 18.

“I like it,” Hall said of the drop-in center. “It’s really homey. It has good energy.”

Hall lost her apartment after not being able to find a steady job and now is living at Springs Rescue Mission, the city’s largest adult homeless shelter.

“I think the center will help stabilize people,” Hall said. “I’d definitely encourage people to use it.”

The Place opened 20 years ago. The number of homeless young people is greater than the community might think, Kemppainen said.

In October, 357 young people age 15 to 24 were homeless in El Paso County, Kemppainen said. Of those, 171 were sheltered somewhere in the system, 150 were living outdoors or in cars or abandoned buildings, and 36 were couch surfing.

Of that total, 44 were homeless for the first time. Six were able to move into permanent housing.

“A permanent drop-in center for youth experiencing homelessness is needed in our community,” Kemppainen said.

As a temporary program, “it’s adequate to help youth get out of the cold and connect with resources and safe adults,” she said. “However, it is inadequate as a permanent solution, which would require showers, laundry facilities and more space.”

Youth are likely to connect to services at a daytime drop-in center specifically for them rather than go to a general shelter program, Kemppainen said.

One in three homeless LGBTQ+ youth who use Inside/Out Youth Services are in homelessness of some kind, according to the organization. Its programs, including a general drop-in youth center, have moved online during the pandemic.

“This new collaboration made sense to both organizations, as getting youth off the street, out of the cold and into safe adult connections is vital,” Kemppainen said.

The project needs $12,000 in additional funding to operate  through the end of February, she said.