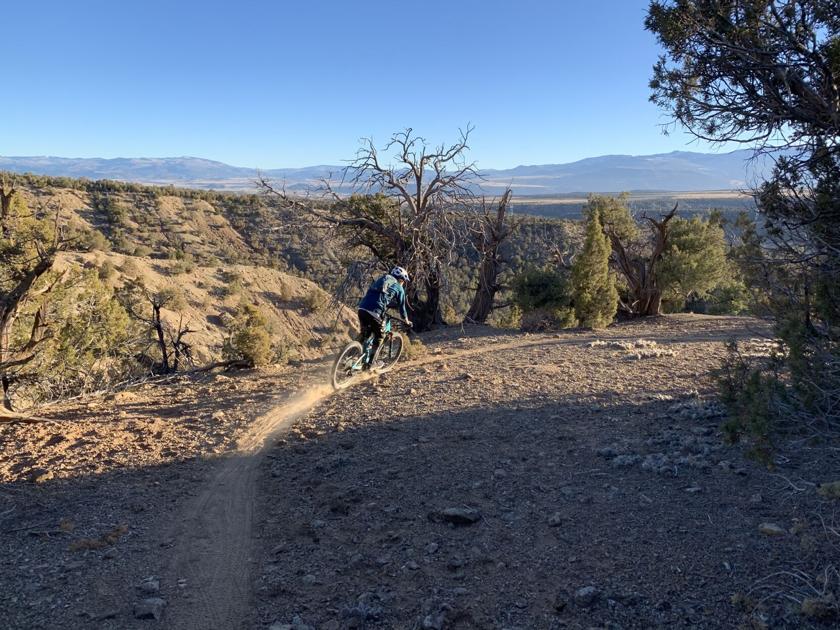 A debut is on the horizon for some highly-anticipated trails in western Colorado.

The Grand Hogback network’s first 6.3 miles could be unveiled to mountain bikers as early as April 15, when closure for wintering wildlife lifts. But the Rifle-based project manager considered the opening “a bit up in the air,” with a new parking lot still to be constructed off Colorado 13 at the popular, year-round hiking trail to Rifle Arch.

Singletrack loops have been built off the Rifle Arch trail, the beginning of what promises to be a new riding destination.

They are part of a broader, 18-mile system blueprinted in 2019. The Bureau of Land Management called for Grand Hogback trails to be a “high quality” option away from nearby Hubbard Mesa, the off-roading and target shooting area where singletrack had been blazed, causing safety concerns.

“With no motorized access, and the hiking trail to Rifle Arch the only trail in the 2,200-acre area, it was a rare opportunity to establish a trail system from a blank slate,” the organization explains on its website.

And in the town 25 miles west of Glenwood Springs, leaders also saw an opportunity.

“Most Coloradans have no idea of the visual grandeur along the Grand Hogback just minutes from the I-70 corridor,” reads the master plan for the project. “These trails will introduce visitors to this stunning area and ensure that riders and hikers alike have a robust combination of trail choices.”

The plan envisions the desert-style riding that enthusiasts have come to crave elsewhere across the Colorado Plateau, which includes Fruita and Moab.

“With a combination of sandstone arches, cliffs, scenic views, and rolling terrain, the Grand Hogback Trails will showcase an undiscovered gem of Colorado and become a premier mountain biking and hiking system,” read a grant application to Colorado Parks and Wildlife.

That was in requesting funds for the second phase of Grand Hogback trail building. Lindquist said the city “missed the cut” for the grant, but with other funding and volunteer labor, he still expected more mileage to be added this year.

In what was a controversial decision by the BLM, Class 1 e-bikes — with maximum, pedal-assisted speeds of 20 mph — will be allowed on Grand Hogback trails. The Rifle Area Mountain Biking Organization wrote a letter against the move, while other locals “are happy,” Lindquist said.

“It’s nice for some people who maybe wouldn’t be able to ride otherwise or as easily,” he said. “But yeah, it’ll be interesting.”