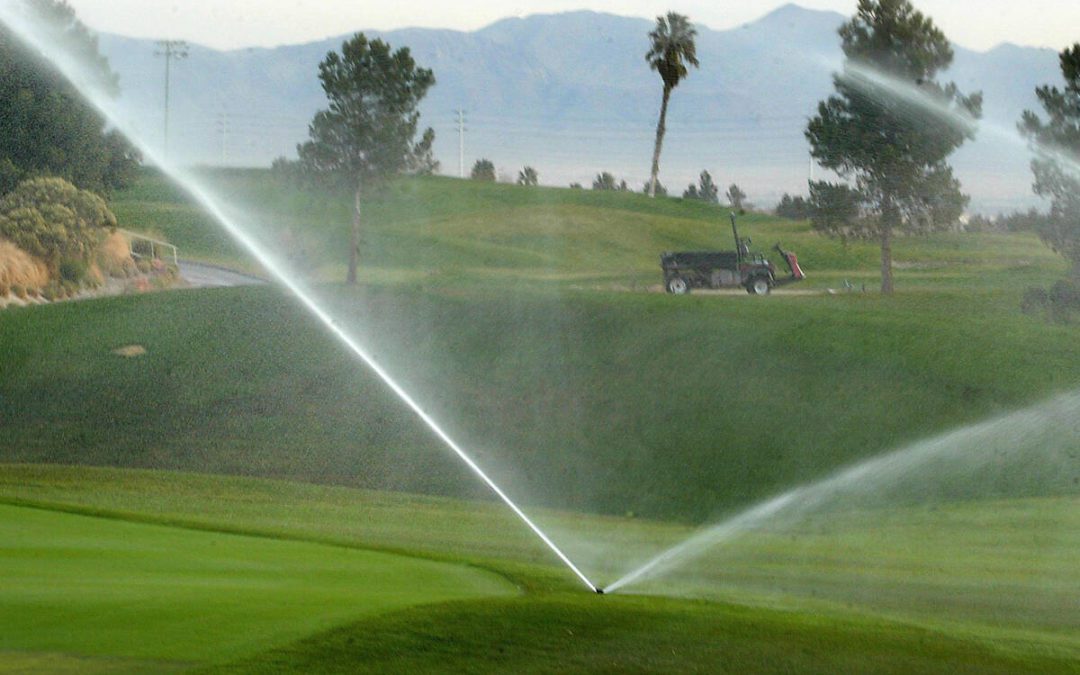 In this 2003 file photo, sprinklers are seen at Angel Park’s Palm Golf Course in Las Vegas. New golf courses that come to Las Vegas won’t be able to use Colorado River water for irrigation, a municipal water board decided on Tuesday. (Las Vegas Review-Journal, file)

New golf courses that come to Las Vegas won’t be able to use Colorado River water for irrigation, a municipal water board decided on Tuesday.

The rule change, approved unanimously by the Las Vegas Valley Water District board, will affect only new courses coming to the city of Las Vegas and unincorporated Clark County. Existing courses will be able to continue using municipal water from the river.

The decision comes just months after federal officials declared a water shortage for Lake Mead, the source of about 90 percent of Southern Nevada’s water. The shortage declaration will slash Nevada’s allocation of water by about 6.8 billion gallons next year.

Under the rules approved on Tuesday, new golf courses could use groundwater rights if they have them, but may not use Colorado River water delivered by the Las Vegas Valley Water District, spokesman Bronson Mack said.

The change does not reduce the amount of water currently being consumed in Southern Nevada, but does prevent additional consumptive use due to golf course irrigation.

On average, golf courses in Southern Nevada consume 725 acre-feet — about 236 million gallons — every year. One acre-foot is about what two Las Vegas Valley homes use over the course of 16 months.

Golf courses account for about 6 percent of Southern Nevada’s total water use, Mack said. Residents use about 60 percent of the area’s water.

Most of the water used at golf courses is used for irrigation or lost to evaporation and cannot be returned to Lake Mead, according to the water district.

Water conservation in Southern Nevada depends almost entirely on outdoor use because nearly every drop of water used inside is treated and sent back to Lake Mead for later use.

Golf courses have taken steps to conserve over the past two decades, replacing about 900 acres of turf — the equivalent of nine professional courses — from non-playing areas, Mack said. That’s enough turf removal to save about 22 billion gallons of water over that time period.