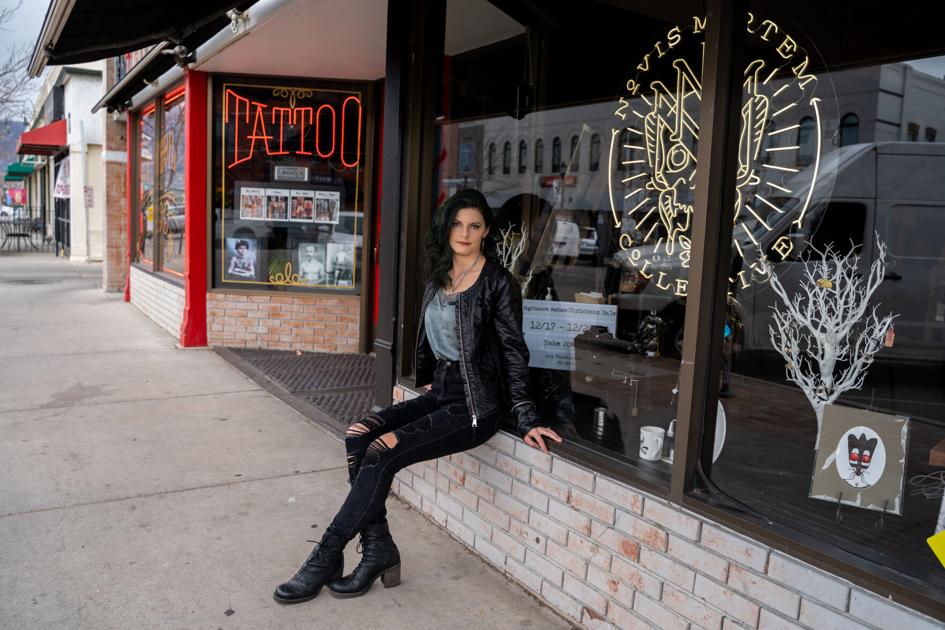 Yes, beautiful and provocative art work hangs on the walls and inhabits the space, but it’s likely your gaze will be drawn to the vast array of glass domes housing all manner of the natural world. You’ll certainly spot the electric blue morpho butterflies from Costa Rica spreading their sizable wings. And the orange-colored stink bugs. Gray, papery dragonflies. Hornet’s nests. Giant flying black beetles that will have you reconsidering a move to wherever they exist. And tentacled octopuses the size of your hand quietly bobbing in water.

Don’t worry, though. All these creatures are no longer among the living. And to also ease your mind — none of them have been killed for the sole purpose of preservation and human gawking.

These displays of the wonderful world of nature come at the hands of Bea Solo, a Colorado Springs woman who got swept up in the art of taxidermy a few years ago after a friend gave her a framed butterfly.

Her adventures into pinning insects, staging deer and coyote skulls and preserving mermaids’ purses from the sea isn’t really surprising when she reveals her beginnings. It seems more like a natural progression from the years she spent as a child foraging in the forest near her home.

And there also were the pets that came in and out of her childhood home: chinchillas, rabbits, lizards, a chameleon, spiders, scorpions, snakes, rats, mice.

“We grew up in basically a zoo,” she says.

Even today, as an adult, she plays with bugs, as she flips through her camera’s photo archive to display pictures of her recent ghost mantis pets, a miniature species of praying mantis that only lives for about six months.

Does she think they grew to know her?

“Yes. You can definitely tame them,” she says. “I had a couple that didn’t like it as much. They swatted at me.”

As her interest in taxidermy grew, so did her collection of pinned insects and other curiosities, quickly filling up the insides of the downtown Colorado Springs home she shares with her husband. She felt an urge to share her pieces with the public but didn’t want to create an oddity shop.

“I differentiate between oddities and curiosities. Curiosity is more natural history, like medical,” Solo says. “I wanted something that feels a little bit more like a natural history museum.”

The collective opened Aug. 15 and features three other local artists — Lindsey Larson, Dania O’Neal and Alexandra Feinstein. A monthly artist also is featured. Works by Feejee are up through January. You can find and order pieces, including Solo’s taxidermy, online at novismortem.com.

“Her work is more museum-style, so it’s kind of on the scientific side, which I appreciate,” says Riley Bratzler, a Colorado Springs printmaker. “She’s so knowledgeable about her pieces, too.”

Solo is not only a budding entomologist with juicy insect factoids, such as clearing up the rumor about lady praying mantises always chomping off the heads of their male mates after procreation: “It depends on how recently she ate. It’s a really high possibility, but it’s not always the case. Only if she’s really hungry.”

She’s also a longtime artist who attended two art schools in Germany after high school, one for fine art and the other for photography, her field of work before she moved to the U.S. Once here, she decided to pursue another path of creativity as a hair stylist. She studied and worked at Toni & Guy before opening her own one-woman downtown day spa, The Emerald Room Salon, in late 2019.

But her future seems devoted to learning more about the creatures that pop up in her life and on her pinning board. She orders her butterflies and beetles online, from such places as conservatories and breeders. The octopuses come from science supply companies that sell the creatures to schools for dissection.

And she’s trained her friends and family to participate in “vulture culture,” she says, which is the hunt for remains of an animal with the intention of using the remains for taxidermy. They bring her skulls, dead insects and sea creatures found after a beach stroll. Her husband’s cousin recently shot an elk that wandered onto his property in Montrose, and she eagerly anticipates cleaning and articulating the animal after its meat has been taken, which means putting the bones back together.

Solo toils away at her creations once or twice a week behind a glass-enclosed workspace at Novis Mortem, 22 E. Bijou St. Visitors are welcome to stop by and observe her pinning insects or placing butterflies in a relaxing box so their wings rehydrate and unfold.

“If I just touch one person and give them a little bit of fun facts so they respect nature just a tad bit more after they were in here, that’s all I want,” she says.