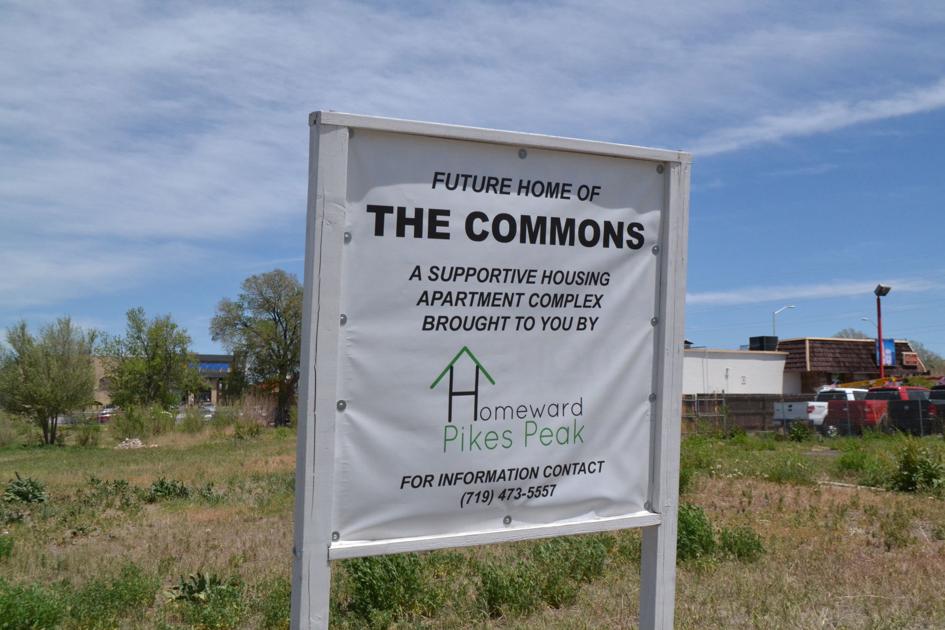 On land where 13 years ago two men lost their lives and hundreds were left homeless during one of Colorado Springs’ most dangerous and devastating apartment fires, today’s homeless will find a place to settle and get assistance to potentially save their lives.

A new 50-unit complex that will provide permanent housing with services such as counseling and substance treatment has been accepted for a funding mechanism that will help jump-start the $16.2 million project.

“I continue to think that housing is truly the answer to ending homelessness, so this is great news for our community,” said Andy Phelps, Homelessness Prevention and Response Coordinator for the city of Colorado Springs.

The Commons, which local organization Homeward Pikes Peak will build near The Citadel mall where Castle West Apartments once stood, will cater to homeless veterans, families and individuals chronically living on the streets and in shelters, said Beth Roalstad, executive director.

“It’s important to note that we’ll accept people no matter what condition they enter,” she said.

That includes those who have active addictions and untreated mental illnesses, Roalstad said. The concept is based on the Housing First-National Alliance to End Homelessness model, which proposes that homeless people need stable housing before they can address other problems in their lives.

Residents will pay up to 30% of their income from a job, Social Security benefits, disability benefits or other sources, for rent and must abide by the conditions of a lease, Roalstad said.

“They will need to be safe and be able to live in an apartment setting,” she said. But they won’t be required to enroll in any kind of treatment program.

“We’ll work with them one-on-one, so hopefully they will want to enter one,” Roalstad said.

Homeward Pikes Peak, which serves 250 people a year in five other housing programs and an outpatient treatment clinic, has been working on the project for two years.

The organization’s application for a low-income housing tax credit from the Colorado Housing Finance Authority was rejected last year, in what Roalstad calls a “really competitive” process.

But Homeward Pikes Peak reapplied in February and heard back last week that the application was approved.

Under the program, selling tax credits to investors will create $9 million that organizers will use as equity to borrow money, Roalstad said. Additional funding from the city of Colorado Springs, the state of Colorado and pro bono work by Minneapolis-based developer, Dominium, also will be applied to construction costs.

Homeward Pikes Peak purchased the 2.85-acre parcel for $350,000 in March 2019, using a Community Development Block Grant from the city of Colorado Springs and other municipal funding.

The city’s planning department has given preliminary approval of the development, Roalstad said, which lies on land already zoned for multi-family use.

“We don’t foresee any problems,” she said.

Construction is expected to start soon, with the campus opening in early 2022.

The timing is right, Roalstad said, as some are predicting the coronavirus pandemic will have severe impacts on housing.

“We really have to shore up existing programs to keep people housed, with an expected 30% to 40% increase in homelessness as unemployment benefits run out and potentially eviction moratoriums are lifted,” she said.

Any rise in homelessness would strain a city already short on affordable housing, officials said.

A “high need” exists, based on numbers reported in annual homeless counts, homeless children reported to the state education department and demand for existing facilities and programs, Roalstad said.

The situation continues even though all goals of the 2019 Colorado Springs Homeless Initiative were met at year’s end, adding more than 250 “low barrier” beds at homeless shelters at the Springs Rescue Mission and the Salvation Army’s R.J. Montgomery Center.

Phelps said the initiative produced “a lot of great benefit,” for developing affordable and attainable housing, which until the pandemic, was on track to show reduced need.

“It’s clear the pandemic will impact poverty, and given that poverty is a symptom of homelessness, we’ll have to wait and see,” Phelps said.

A new, 90-day emergency shelter for homeless families with children that Family Promise of Colorado Springs opened earlier this year in an refurbished hotel on South Nevada Avenue has been full every night, Roalstad said.

Also on the horizon, a 50-unit complex specifically for homeless military veterans is scheduled to open in the summer, and an affordable apartment complex for senior citizens is in the works.

“But we still need more,” Roadstad said, adding that there are 300 homeless vets on average every month in Colorado Springs.

Another 325 individuals who are not vets are chronically homeless each month, she said.

“While this is a success for us, it still doesn’t meet the total demand for homeless individuals and families in the community,” Roalstad said. “Without adequate housing, we’re going to have continued homelessness.”