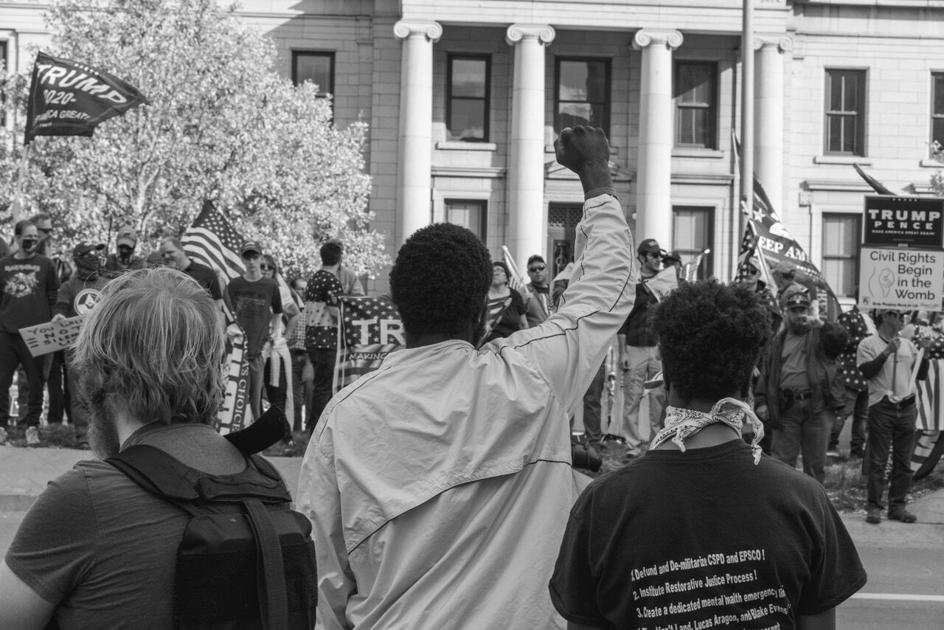 Rachel Cubi-Riley watched the killing of George Floyd last year with her 15-year-old son and saw the fear in the boy’s eyes.

The emotion was unacceptable to the Puerto Rican photographer, Army wife and mother of two boys.

“I didn’t want him to be scared anymore,” says Fountain resident Cubi-Riley. “I didn’t want that to be the message he grows up with.”

She decided to add her voice to the Black Lives Matter movement, and with camera in hand, she attended Denver’s first protest in late May, followed shortly by the Colorado Springs protests. Her ambition grew bigger.

She plotted out cities across the country where controversial protests had happened in the wake of Floyd’s death — Tulsa, Okla.; Louisville, Ky.; Washington, D.C. — and hopped in a car with a friend to capture the dramatic images.

Those black-and-white photos, from five protest sites, are on display in “Will the U.S. Ever Be Us,” a new exhibit at Cottonwood Center for the Arts. The free show is up through Feb. 27.

What she saw during her two-and-a-half week journey inspired her: “I love the interesting, intelligent, creative way these young people are protesting. They just have so much courage.”

And she heard a similar message from protesters wherever she went: “Please tell our story. What you see on the news isn’t the true story.”

Cubi-Riley attributes the sentiment to a discrepancy she sees between those capturing the news and those making the news.

“I noticed a lot of the photographers that represent news organizations don’t represent the people protesting,” she says. “They don’t look like them. I was able to get a lot of these pictures because I approached them and spoke with them and let them know what I was doing and why. I think there would be more communication if people interviewing people also represented what they looked like.”

There’s been a camera in Cubi-Riley’s hands since junior high in New York City, says the native New Yorker, who graduated in May with an associate of applied science in professional photography from Pikes Peak Community College.

“My passion is people,” she says. “I feel everybody has a story to tell, and I want to tell you a story with my photography.”

Her storytelling ability shines in photos such as “Guy With a Gun,” in which she depicts a young man with his gun at a Springs protest, his back to her camera.

“I took that picture from behind,” she says. “Then I realized I needed to live by example and go up to him and ask him why he was here with a gun and ask may I take a picture of him.”

And then she took a photo from the front “because I was like we can’t be scared of each other. I believe we have more in common than divides us.”

If she were to sit down and have a conversation with the man, she’d ask why he brought a weapon to a peaceful protest.

“Carry a flag. Say I understand you feel Black lives matter and you don’t agree with it, and you would prefer us to say all lives matter, but we’re still having this conversation,” says Cubi-Riley.

“We need to sit down without weapons and listen to why we keep saying this. We’re not talking about a movement. We’re talking about the fact that young people of color have fear, true fear, and feel they’re not treated as equally as their counterparts.”