New Colorado podcast interviews immigrants who are thinking of leaving the U.S. amid the pandemic 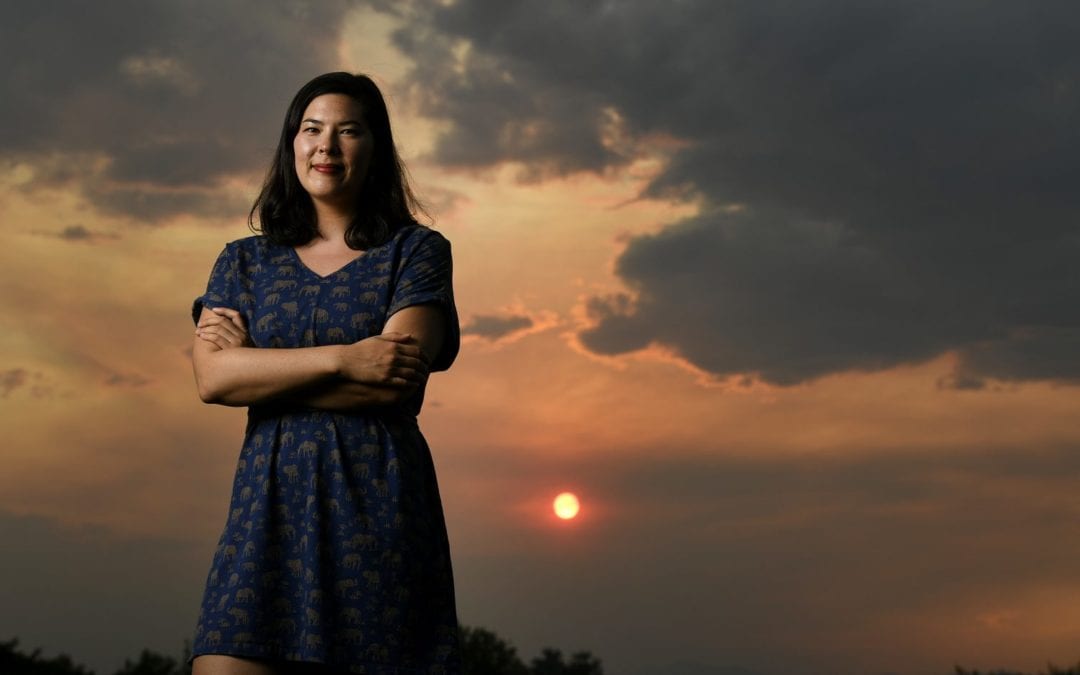 Heeja arrived in the United States from South Korea at age 23, eager to start a new life. But after more than four decades of working, raising children and otherwise making her home in America, she’s considering returning to her native country.

“She’s had health problems recently and gotten really frustrated with the health care system here,” said daughter Mia Warren, 30, via phone from her mother’s house in Louisville this week. “The pandemic has really laid bare the cracks in these systems. So you look at a country like South Korea, which is doing a better job of controlling the spread of the virus and has nationalized health care, and wonder: ‘Are other immigrants thinking this?’ “

Warren’s new podcast series, “A Better Life?,” found several who are, starting with Heeja. (Warren requested that her mother’s last name not be used.)

Hosted by Zahir Janmohamed and executive produced by Warren for New York-based Feet in 2 Worlds, “A Better Life” premieres Aug. 20 with a 10-episode first season. It opens with the story of Warren’s mother — with Warren acting as the interviewer — while subsequent episodes feature the work of journalists who are immigrants, or the children of immigrants interviewing their own parents.

The recipe promises insightful and bracingly intimate listening, as interviewers uncover stories that they were often shielded from as children. Those alternate with conversations from immigrant elders — grandparents, parents, aunts and uncles — “to hear how they are coping during this time, and what they have learned over the years that can help the rest of us survive today’s challenges,” according to the podcast’s website.

So what, exactly, are they learning in the age of coronavirus?

“A lot of immigrants have internalized this notion that they have a better life here,” said Warren, who’s visiting Colorado to help her mother move to the East Coast — a first step in her decision process on South Korea. “But that becomes really complicated in moments like this where they realize, ‘OK, I bought into the myth of the American dream to justify immigrating to the U.S., but look at where we are now.’ “

Heeja’s health problems aren’t related to the novel coronavirus, but the fact remains that the 68-year-old could be getting health care that covers about 97% of her costs if she were being treated in South Korea, Warren said. As Heeja and Warren delved deeper into the topic this spring, they quickly found others who shared their concerns.

“It really hit home when I talked to our host, Zahir,” Warren said. “His parents are Indian and grew up in Tanzania, and he has a lot of friends in the Indian diaspora. He was getting WhatsApp messages from friends in India that said, ‘Dude, what’s happening over there right now?’ That question usually goes the other way in America.”

Warren wasn’t looking to make a podcast about immigrants when the year began. A former Fulbright scholar who dove into podcasting during a fellowship trip to Lima, Peru — where she documented stories in the Japanese Peruvian community — Warren is the co-creator and executive producer of Feeling My Flo, a podcast for tweens all about menstruation.

Having grown up in Boulder and attended Northwestern University, she also worked as a broadcast and podcast producer for StoryCorps, a national oral history project, and a reporter at Marfa Public Radio in West Texas.

Host Janmohamed, a Zell Writing Fellow at the University of Michigan and freelance journalist for The Washington Post and others, co-founded the podcast Racist Sandwich, which was nominated for a James Beard Award in 2019.

Originally, he and Warren wanted to produce a food and politics podcast at the beginning of 2020.

But considering Warren’s work with Feet in 2 Worlds, it didn’t take long for a new, deceptively topical (and ultimately timeless) idea to swim into view. One that followed stories beyond the clichés that often plague tales of immigrants, such as being scapegoats for a community’s problems or, alternately, not living up to the “model minority” expectation.

“Our (journalists) are from these communities they’re reporting on and have close relationships with the people they’re talking to,” Warren said. “They speak the language and people trust them. That’s what makes these the type of stories that aren’t widely heard by audiences.”

It helps that Feet in 2 Worlds offers training programs, workshops and internships for immigrants looking to tell their stories in the news media — frequently on public radio and online news sites. The 15-year-old project, part of the Center for New York City Affairs at The New School, has produced journalists who have gone on to jobs at WNYC, The New York Times, Buzzfeed, The Associated Press and many more news organizations, according to its website.

One of them is Maritza L. Félix, a Phoenix-based reporter who has worked for numerous Spanish-language media outlets in Maricopa County since 2009. She contributes an episode, originally written as a story for Slate, that follows up on undocumented Mexican housekeepers who weren’t paid for their work at the beginning of the pandemic.

Other episodes cover a Vietnamese survivor of domestic violence and a Pakistani-American reporter who decided to move from New York to Ohio to be closer to her hairdresser mom and landlord dad.

All are deeply personal and shot through with experiences both heartbreaking (being told repeatedly to “go back home” by white people in their communities) and uplifting.

“There is resilience and agency in these people telling their stories,” Warren said. “It’s incredibly personal. It was hard to get my mom to open up and be vulnerable about her life.”

A lot of the conversations, especially those elders, are light and joyful, offering hope, optimism and wisdom amid difficult times. Warren wanted to portray the full range of experiences and emotions on the show, she said, and bring everything back to the human experience — not simply the immigrant experience.

“Having worked in public radio for awhile, you just don’t hear many non-English accents,” she said. “So to hear all these different types of accents — Haitian, Greek, Pakistani, Argentinian — was really exciting. I’ve heard too many times that (non-English) accents are ‘impenetrable’ for radio audiences, but you can use context clues to figure out what someone is saying. The mood and tone of what they’re saying can be just as important, too.”

The “A Better Life?” podcast, and Feet in 2 Worlds in general, are also addressing a desperate need for more diversity in American newsrooms, which are largely white. Instead of waiting for institutional roadblocks to be removed, they circumvent them to present unapologetic stories that show instead of telling about the need for more voices in mainstream commercial media.

“We have to rebuild both within and outside of these structures,” Warren said, praising programs like Denver-based House of Pod’s women-of-color podcast incubator. “Immigrants and people of color have been disproportionately affected by coronavirus, but the headlines don’t go much beyond that. We’re telling stories that can really only be told by immigrants, their second-generation children and people who know what it’s like to see this country inside and out.”

1. The Syndicate
Former Westword reporter and Atlantic contributor Chris Walker investigates the wild-yet-true story of a multistate marijuana drug-smuggling ring’s rise and fall, with endless implications for our current cannabis laws. Stick around for the episode in which he goes skydiving in Texas with “one of the most prolific drug mules of the past decade,” as he put it.

2. Back from Broken
Colorado Public Radio fan-favorite Vic Vela narrates this alternately gut-wrenching and uplifting podcast that uses his own struggles with addiction as a jumping-off point. Now in recovery, Vela’s heart and soul shine through in interviews with sports and music stars — including Denver’s The Lumineers — but also regular folks dealing with addiction, mental health and physical rehabilitation.

3. Low Orbit
While producers describe Low Orbit (formerly Denver Orbit) as an audio magazine, we’re comfortable calling it a podcast, given its format and the range of issues it visits. Unlike most podcasts, it features documentary stories, radio plays, memoirs, music, comedy and poetry in its celebration of the local arts and culture scene.

4. On Something
If you want to find examples of Denver’s ascension as a major market over the last few years, look no further than “On Something.” The CPR podcast is as enlightening, entertaining and savvy as the most popular national podcasts, only with a focus on marijuana legalization across the United States (and Colorado, of course). Host Ann Marie Awad covers a lot of ground without losing focus of compelling, and often absurd, stories and personal tales she uncovers on a regular basis.

5. Off Color
Host Rebekah Henderson, a.k.a. The Tan Tigress, has logged a lot of time on the mic via this real-talk-about-race podcast, which takes a conversational approach to understanding current events through the lens of social justice. It’s always a worthwhile and relevant listen, with episode topics ranging from “July 4th Don’t Mean (Expletive) to Black People” to “Racism and Misinformation in the Medical System,” along with conversations with public figures such as Tay Anderson. stitcher.com/podcast/off-color