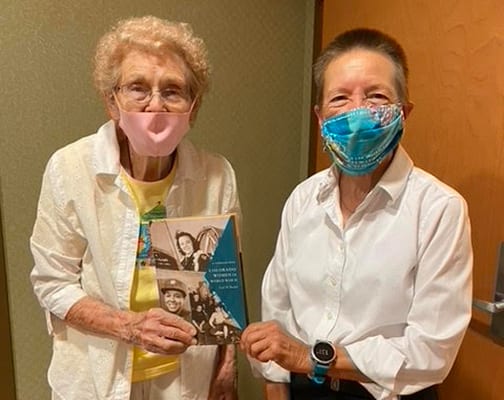 The term “Greatest Generation” often refers to Americans who grew up during the Great Depression. Many of the young men in this generation went on to fight in World War II, leading America and its allies to victory.

While history books tell the stories and experiences of these brave men and their battles, women too played a large part in the success of defeating Adolf Hitler and the Nazis regime.

Denver author Gail M. Beaton recently completed a book detailing some of the stories of Colorado women whose labor and dedication to their country helped win the war.

Beaton dedicates the book, “Colorado Women in World War II,” to “the women who proudly served in the military worked in defense plants and government agencies, nursed overseas and state-side, farmed and ranched, and volunteered on the home front during World War II.”

The Denver resident started on the path of writing her book in 2014 after chatting with some female WWII veterans at a 1940’s reenactment.  At the reenactment, Beaton portrayed a “Rosie the Riveter” character, focusing on women working in factories.

“There was a woman in the audience who came up later and said ‘I really loved it but you didn’t include the Army nurses,’” Beaton said. “I said you’re right, but I don’t know much so can I interview you and she said ‘sure.’”

As Beaton did more presentations, more women approached her to talk about their stories during WWII. The book took Beaton around six years to collect and write the women’s stories.

Despite being a social studies teacher and focusing on U.S. history, Beaton learned a lot of surprising and unknown facts from the women about the war.

“This one Army nurse from Windsor saw Buchenwald, the concentration camp, two days after it was liberated,” Beaton said. “Then one other woman told me about these ‘war-sages’ and they were corsages that were made out of the war bond stamps.”

Beaton also learned that women who were Army and Navy nurses were prisoners of war in the Pacific for almost three years.

“There was so much, I didn’t know this stuff. I knew women were pilots, but I didn’t know 38 of them died in their service,” she said. “There was just such a wide variety of experiences these women had. They’ve all been so inspiring.”

According to the U.S. Department of Veterans Affairs, as of 2016 there were only about 620,000 veterans left out of the 16 million who served in WWII.

With many people of this generation close to or already in their 100s, recording their stories as soon as possible is key to learning unique stories and not often known facts about the history of WWII.

However, with women marrying and changing their names, tracking down the female veterans was more of a challenge, Beaton explained.

“In some ways, they kind of disappear from history,” she said. “I’ve come across obituaries where it was only the woman’s married name. Or you come across some women that you would love to be able find out more about, but you can’t for one reason or another. So their story kind of got lost.”

Some of the women Beaton interviewed didn’t want to be included at all.

“They said no that they didn’t want to be included even anonymously,” Beaton said. “That was kind of a bummer.”

Beaton still keeps in contact with the women featured in the book.

“Without the women, we would not have won the war. There wouldn’t have been enough soldiers on the battlefield if they had to be clerks, typists, mechanics, nurses and all these things women did,” Beaton said. “Even one of the Nazi officials said after the war that the Americans did it right; they got their women involved and we didn’t do that.”

Beaton’s books are available for purchase through her website, Barnes and Noble, Amazon, University Press Colorado and Indie Bound.

Growing up with three brothers, Beaton used writing as a way to connect with herself.

“I was always writing diaries and journals and things like that,” she explained. “In school I took a writing class and I really enjoyed writing. I enjoyed more the classes where I got to write an essay rather than ‘true or false’ questions.”

After seeing her potential for writing, a high school teacher encouraged Beaton to pursue journalism, but Beaton had her heart set on becoming a math and social studies teacher.

“My high school principal said ‘you’re never going to get a job.’  This was in 1971-72,” Beaton recalled. “He said all the boys’ coaches are social studies and math teachers and there were no girls’ sports in Colorado Springs at the time.”

In addition to writing, Beaton is a Chautauqua presenter, taking her “Gail Murphy: Colorado’s Rosie the Riveter” character on the road to teach communities about women’s role in WWII. Beaton has also portrayed “Sarah Platt Decker: National Women’s Club Leader and Colorado Suffragist” in presentations.

Beaton also serves as a member and archivist for the Denver Woman’s Press Club, is a charter member of the National Women’s History Museum and is a member of Women Writing the West.

For more information on author Gail M. Beaton, or to learn more about her books, go to .