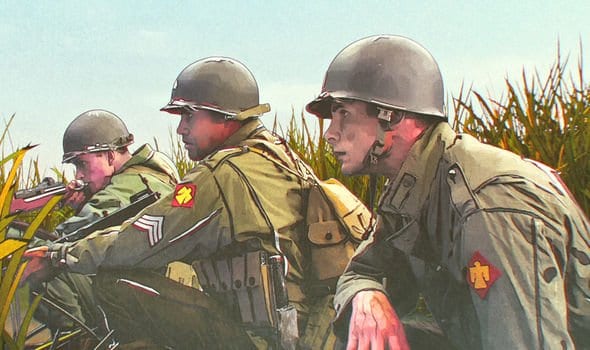 The incredible scope of Felix Sparks’ life makes for a great book, but translating it to the screen proved far more difficult.

“The Liberator,” written by best-selling British journalist Alex Kershaw and published to acclaim in 2012, told the story of Sparks, who helped lead the liberation of Dachau during World War II.

The ethnically diverse group of soldiers he commanded — including Native Americans, Chicanos and white cowboys — were some of the first Allied forces to see the notorious Nazi concentration camp of Dachau when units of the 3rd Battalion, 157th Infantry Regiment, 45th Infantry Division (Sparks’ ragtag Thunderbird group) arrived at the site in the south of Germany on April 29, 1945.

The subtitle of Kershaw’s book — “One World War II Soldier’s 500-Day Odyssey from the Beaches of Sicily to the Gates of Dachau” — hints at the depth of drama that preceded that moment. But the process of turning it into a film spanned years of technical and financial challenges, given the breadth of locations and events.

“The project started back at A&E studios in 2014, but the budget was ballooning out of control,” said British actor Bradley James, who plays Sparks in the new Netflix series, “The Liberator.” “Then Trioscope and Jeb (Stuart) came along.”

Adapted by Stuart, who wrote gritty underdog-blockbusters such as “Die Hard” and “The Fugitive,” and directed by Grzegorz Jonkajtys (who created the bear in “The Revenant,” among many other special effects in Oscar-winning films), “The Liberator” is the story of reluctant heroes, outcasts and beaten-down men who sacrifice everything for a cause.

Many of them met terrible ends, but Sparks’ life in Colorado after the war continued with a string of improbable, admirable and selfless successes.

The native of San Antonio, Texas, earned his law degree at the University of Colorado in Boulder and, after graduating in 1947, opened a practice in Delta. After winning the district attorney’s seat there, he was appointed to the Colorado Supreme Court in 1952 by Gov. Ed Johnson. He eventually returned to Delta as a lawyer, but retired at the rank of brigadier general, having served as commander of the Colorado Army National Guard from 1968 to 1979 (and as an officer during the Cuban Missile Crisis in 1962).

Later in life, he was a water-rights champion, helping create “systems of reservoirs, pipes and pumps that bring Western Slope water to the Front Range,” according to a 1998 Denver Post story. Sparks is also credited with writing the Colorado groundwater law, and was an expert on the Fryingpan-Arkansas trans-mountain water-diversion project.

To coincide with Veterans Day on Nov. 11, Netflix is releasing the animated adaptation of “The Liberator” as a four-part miniseries, with Sparks — who died in 2007 at age 90 — as the main character. It’s the first official use of the Trioscope technology, which helped bring the sprawling (and formerly too-expensive-to-film) narrative to the screen.

We talked to 37-year-old James (“Merlin,” “Underworld,” “Damien”) this week via Zoom about the challenges and rewards of the project. This interview has been edited for length and clarity.

Q: You’ve played fictionalized characters (such as Prince Arthur in “Merlin”) before, but how did you prepare for this real-life figure?

A: I’m very fortunate in that I’ve been enamored with a lot of the characters I’ve been asked to play, so even the homework you have to do is never a chore. I had not been aware of Felix Sparks or heard anything of the history of either him or the Thunderbirds. It’s a story we’ve not heard a lot about World War II, and we’ve heard so many.

Q: That only adds to the underdog quality of the story, in many ways.

A: You’ve got a story involving the contributions of Mexican-Americans and Native Americans, who at the time found it much harder fitting into the dynamic of society, and certainly the dynamic of an American army. And along comes this guy, Felix Sparks, who gave them belief in a purpose — a reason to want to do their best. There was rarely a job he asked someone to do that he wouldn’t do himself, and it inspired the people around him because they knew that. But it was hard to play because I had to find out where that core of him comes from.

Q: There’s a lot of poignance in the story, this uniting around a widespread but seemingly insurmountable challenge to democracy.

A: Although certain ethnic groups make up a much smaller number of people fighting in World War II, those stories are still largely untouched in film — and now there’s finally a wider desire to tell them. Jeb went to great lengths to do everything he could to not fall into stereotypes with the communities we’re representing. He worked very closely with Jose Miguel Vasquez (who plays major character Corporal Able Gomez) and there’s a lot of attention to detail in using a voice that sounds truthful for (the characters).

Q: The war-movie genre — and this is certainly part of it, with huge action and drama, and tons of ground covered — is increasingly hard to innovate, especially with stunners like “1917.” What did this project learn from the others?

A: Jeb has a pretty firm idea of the tropes, and I would give him credit for avoiding the obvious ones. We have the novelty factor with Trioscope, which no one’s really seen before, but that only lasts so long if the story’s not there. I was able to watch an early version (pre-Trioscope) and was gripped by the story. When I saw the finished trailer, I bawled.

Q: What was it like working with Trioscope? (Note: “The Liberator” used Trioscope to capture actors’ performances on a sound stage, then animated them against computer-generated backgrounds.)

A: I remember they had sent me a tester (video) they shot about five years ago and I had a lot of questions about it, because I felt like there were certain blockades. I wasn’t strictly down with Trioscope. And basically, within five minutes, Jeb (Stuart) turned me around, because I was asking some of the same questions that, over the last three years, Trioscope has worked to solve.

Q: What were some of the issues?

A: Some of them were in the testing phase. A clear example is the makeup they played around with to capture those facial expressions we’re so finely tuned to reading after years and years of evolution — those almost imperceptible moments in a performance. By the time production came along, they had all been dealt with.

Q: The production happened largely on a sound stage, right?

A: Yes, and when it came to filming in Trioscope, you have to have done your homework with regards to a given scene and environment. You could be wandering around in the snow. You might not have slept or eaten in a few days. Your feet might be wet and cold. Then you get to the studio where everybody’s roasting under these bright lights and you have your costume and props and guns, and the immediate area you’re in is blue (screen). So you have to research what the impact of a tank exploding in front of you is going to be, or a B-17 flying over the top of your head. These men went through some of the hardest battles of the war and a lot of them didn’t come back. There’s a responsibility in portraying that accurately.