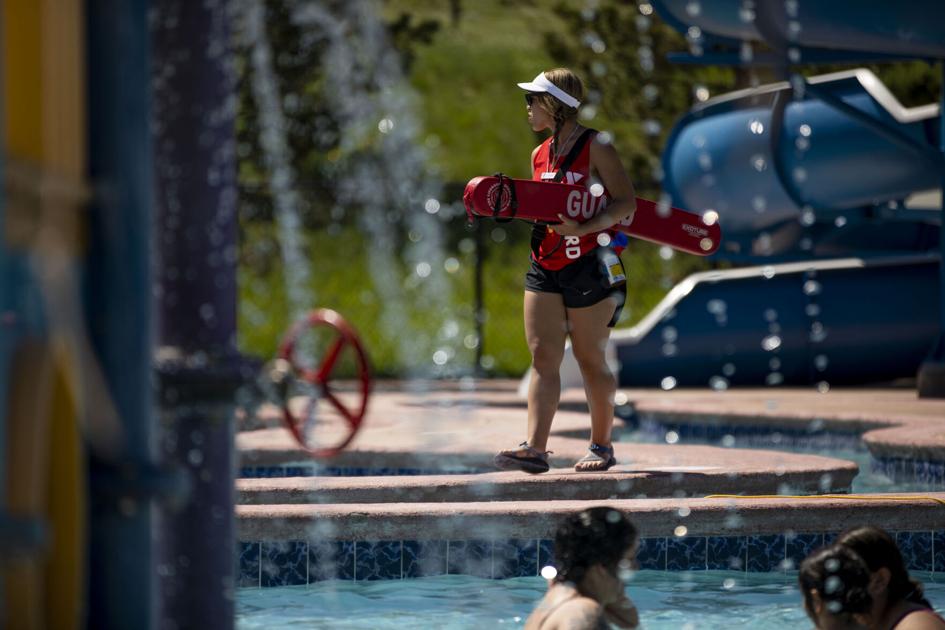 After a cold wet May, summer temperatures are driving sun seekers out onto pool decks — but hours at popular outdoor Colorado Springs pools will be shorter because of the national lifeguard shortage that is keeping some pools closed across the country.

The coronavirus shut down many of the training classes held by national groups, such as the American Red Cross, that certify about 300,000 first time lifeguards each summer, said BJ Fisher, director of health and safety at the American Lifeguard Association.

In addition, many trained lifeguards didn’t get recertified, and fewer foreign exchange students are coming over to fill the positions, so some cities are keeping pools closed or stretching their staff thin, he said. Other countries are seeing similar problems with staff, he said.

Danielle Bruce, 7, goes down a water slide as lifeguards patrol the pool at Wilson Ranch Pool, operated by YMCA of the Pikes Peak Region, in Colorado Springs on Wednesday, June 9, 2021. The pool opened on Memorial Day weekend. (Chancey Bush/ The Gazette)

“I think having that down year where we simply didn’t have a need that’s definitely impacted it,” she said. Local lifeguards let their certifications lapse and sought other work.

The YMCA has prioritized staffing for its outdoor pools but they have slightly shorter hours than a normal summer. The indoor pools have also had their hours cut to help shift staffing. For example, indoor pools have closed in the middle of the day when demand is lower, she said.

The nonprofit is still hiring lifeguards and running lifeguard training classes that would normally be over for the season, but those classes can’t be accelerated for safety reasons. It’s also tricky to run them this time of year because staff qualified to teach the classes have been working at the pools, she said.

Press expects staffing will improve throughout the summer and hours to be extended.

Jayson Bruce, 9, stands under a fountain at water at the Wilson Ranch Pool, operated by YMCA of the Pikes Peak Region, in Colorado Springs on Wednesday, June 9, 2021. The pool opened on Memorial Day weekend. (Chancey Bush/ The Gazette)

Following an extensive renovation, Prospect Lake beach house is scheduled to reopen June 14 and offer another option for swimmers, city spokeswoman Vanessa Zink said. The YMCA will operate the beach house and expects to have lifeguards in place for the lake, Press said.

The lake has been dogged by toxic blue-green algae the last two summers forcing the city to close the water to recreation.

City Environmental Health and Safety Specialist Erik Rodriguez said he has been using a natural enzyme to treat the algae as it occurs.

“We are doing what we can to make a safe water environment for recreators,” he said.

While the water is treated before it’s put into the lake, it doesn’t circulate and the stagnation makes it more challenging to control the algae, he said.

The algae also benefits from phosphorus, and the city is trying to determine how phosphorus is getting into the water to cut it off the supply, he said.

The city’s Portal Pool, near Austin Bluffs and north Union Boulevard will remain closed for the second year as the city evaluates problems with the pool’s foundations, Zink said.

Nationally, staffing pools could remain tough because the pandemic compounded an already existing problem of leaning on teenagers and college students to be lifeguards. For years, pools and beaches have struggled with staffing early and late in the summer season as schools have lengthened their semesters passed Memorial Day and into August, Fisher said.

“We have been relying on the youth too long,” he said.

Retirees could offer one solution because they are a growing demographic. The industry may also have to consider raises to compete with retail and aggressive recruitment for the 2022 season, he said.

Keeping pools and other bodies of water open with lifeguards on duty should remain a priority because when they close, kids are likely to sneak in and swim unsupervised, which could be particularly dangerous because so many areas didn’t offer swimming lessons last year.

“We fear this year is going to set records in drowning,” Fisher said.

He encourages parents and families to designate someone to supervise children and be within an arm’s reach of them at all times, even when lifeguards are on duty.

The YMCA encourages pool patrons to check its website for pool hours.