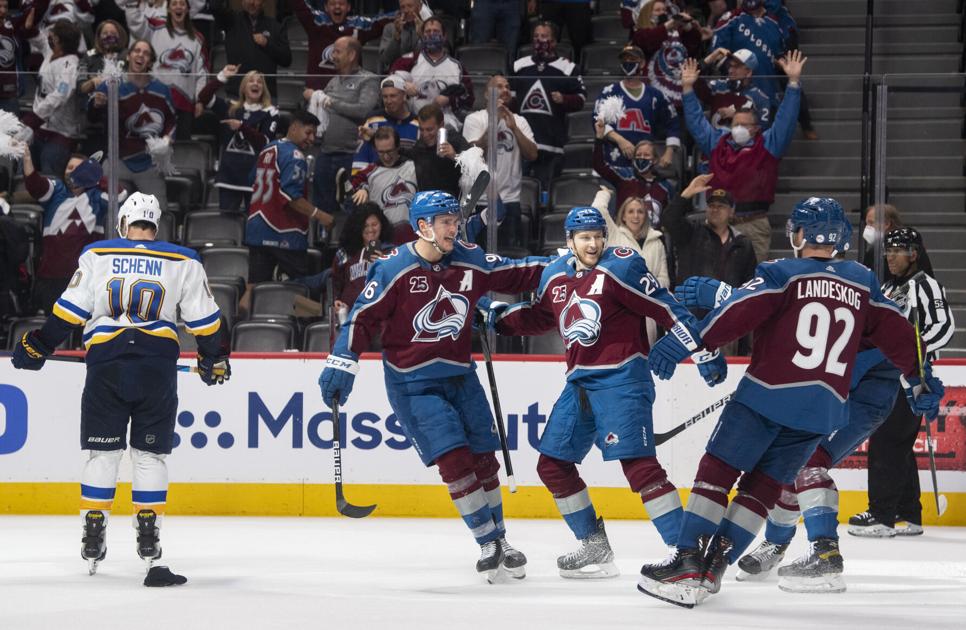 DENVER — In stepped Nathan MacKinnon. Scorer of goals and motivational speaker on an as-needed basis.

“Nate got the guys together on the bench, had a little chat,” Colorado Avalanche coach Jared Bednar said of a time when a Game 2 win over the St. Louis Blues wasn’t so certain anymore.

“So did (Gabriel Landeskog). Off we went to answer the bell and get a couple big goals.”

The Avalanche built a lead and watched it dwindle on Wednesday night at Ball Arena, but empty-net goals from Brandon Saad and MacKinnon – MacKinnon’s completed a hat trick – allowed the team to make off with a 6-3 victory and a 2-0 lead in the first-round playoff series with the Blues.

Game 3 is Friday night in St. Louis. Colorado forwards Nazem Kadri and Tyson Jost could face supplemental discipline from the league stemming from a match penalty for an illegal check to the head and an elbow that wasn’t called, respectively.

Joonas Donskoi’s second goal of the night gave the Avalanche a 3-0 lead, but the Blues came close to tying the game. Kadri got his team in trouble when he laid out Justin Faulk with an open-ice hit in the third period and drew a major penalty. Brayden Schenn scored during the five-minute power play to put his team within a goal, 3-2.

MacKinnon’s own second of the evening appeared to put the game away for good. The Blues’ Mike Hoffman scored 15 seconds later to make it 4-3.

“I was confident we were able to defend the lead at the end, and that’s what we were able to do,” Donskoi said. “Obviously not our best hockey, especially in the second half of the game. We have to get better.”

Ryan Graves fired on net and Donskoi redirected it in 35 seconds into the game.

On the Avalanche’s first power play of the night, MacKinnon drifted in, almost twirling the puck on his stick as he looked for a shooting lane. He beat goalie Jordan Binnington (29 saves) low through a mess of limbs, including a screen from Landeskog.

“Landy and Mikko (Rantanen) are beasts down low,” MacKinnon said. “Honestly without those guys battling and mucking up in front when I’m up high, those pucks don’t go in. Everyone’s helping out for sure.”

Donskoi was guiding traffic in front of Binnington on another power play when a MacKinnon shot went off him and in to make it 3-0.

The Blues’ Sammy Blais got one back before the end of the second period. Patrik Nemeth sent the puck off the opposite-side boards and St. Louis got to it first. Blais picked up a rebound of the initial shot and put it behind Grubauer.