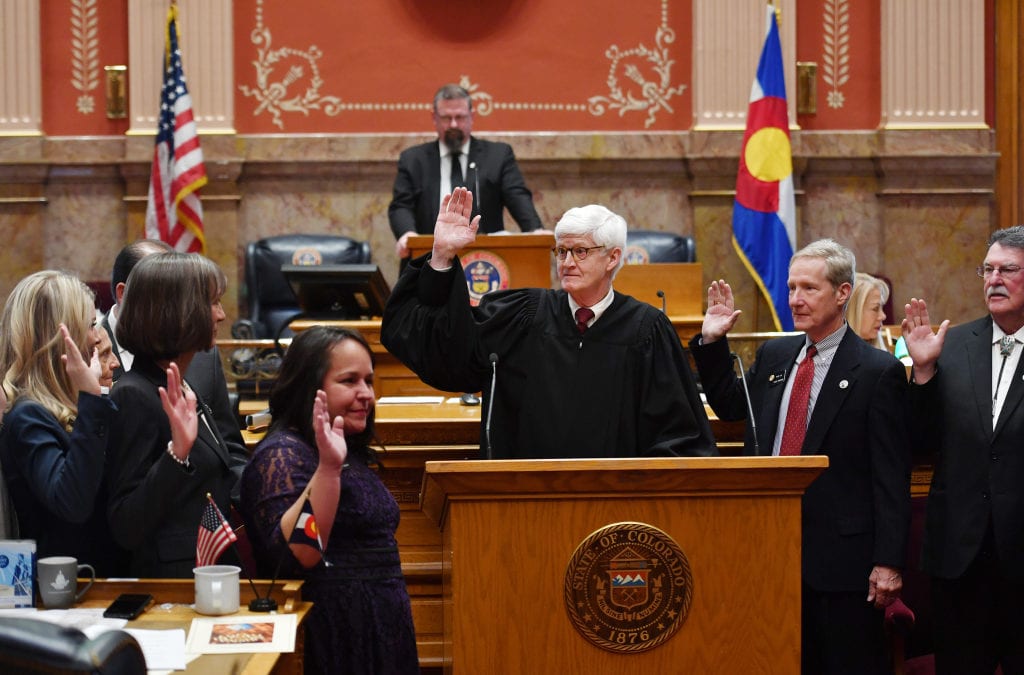 On a Thursday in August 1983, just before 9 in the morning, a neatly dressed man walked up to a uniformed police officer in downtown Denver and confessed that he’d killed a 14-year-old girl.

The man waived his right to remain silent, gave baffled officers the girl’s first name and led them to the crime scene — the exact spot where police had discovered a young girl’s body four months earlier.

The man was charged with murder. But defense attorneys later successfully argued his confession was invalid in part because he was mentally ill when he admitted to the killing.

The Colorado Supreme Court agreed, and so in 1986, then-attorney Nathan B. “Ben” Coats argued the case for the state before the U.S. Supreme Court. He won — the confession was allowed as evidence — and the decision became key criminal case law, still taught to law students today.

That landmark case is now just a blip in Coats’ long and impactful career, a tenure that is coming to an end. Coats, who is now chief justice of the Colorado Supreme Court, is set to retire in January after two decades on the bench in the state’s highest court. Justice Brian Boatright will be Colorado’s next chief justice, followed by followed by Justice Monica Marquez, as the court implements a new rotation system to fill that post.

Coats brought to the job steady leadership, sharp legal analysis and a practical approach to law that considered the down-the-road impacts of judicial decisions on the world beyond the courtroom.

“He has a great legal mind. He has the ability to really analyze issues in a deep and thoughtful way,” said former Colorado Gov. Bill Ritter, who worked with Coats in the Denver District Attorney’s Office in the late 1980s and ’90s.

Coats headed up the office’s appellate division, where he was considered an insightful attorney who could collaborate in a gracious, non-condescending manner, his former colleague Dick Reeve said.

“He had developed a reputation at the attorney general’s office that he carried forward with him at the district attorney’s office for being a profound and deep thinker, having a remarkable memory for the law, for case decisions and the nuances of opinions that were issued in different courts,” Reeve said.

Sometimes when Ritter, who became Denver’s district attorney in 1993, asked Coats for analysis, Coats would cite off the top of his head not only the case number for a relevant case, but also the page and paragraph where the pertinent information could be found, Ritter said.

“As district attorney, you have a lot of thorny issues that come your way, and Ben was the person I relied most heavily on for anything that required legal analysis,” Ritter said.

Coats, who declined to be interviewed for this story, was appointed to the state Supreme Court in 2000 by Republican Gov. Bill Owens. At the time, Coats said he would aim to do the job “fairly and evenhandedly.”

“I think (Owens) chose Justice Coats because he was a relatively conservative appointment,” said Richard Collins, a professor of law at the University of Colorado Boulder. “And indeed he was a fairly consistent conservative vote on the court over the many years he served.”

Collins cited several cases, including one in which Coats dissented from the majority on whether a search prompted by a police dog that had been trained to detect marijuana — even though it is legal in Colorado — was a lawful search. The court ruled the search unlawful, and Collins said Coats “quite angrily dissented from that decision.”

“Apart from my objections to much of the majority’s selective and at times revisionist promenade through the history of both federal and state search and seizure law, I object specifically to its radical reconstruction, in the wake of our current marijuana initiative, of the state’s own constitutional Bill of Rights,” Coats wrote to open the dissent, which was joined by two other justices.

“He was never anybody to shy away from telling me how he felt,” said John Gleason, who for years served as the state’s attorney regulation counsel and reported largely to Coats. “But he was also very interested in learning my side.”

The chief justice has a quick, sideways sense of humor, an eye for detail and an affinity for “The Three Stooges.” He pored over the Office of Attorney Regulation Counsel’s annual budget with a fine-toothed comb, former heads of that office said.

“When I proposed artwork for the office, he said, ‘You know, when I worked for J.D. MacFarlane at the attorney general’s office, we did fine with just posters on the wall,’” James Coyle, who led the office from 2013 to 2018, said with a laugh. “I go, ‘OK, I’m going to withdraw that request.’”

“You delegate that authority”

This year, Coats and the other justices on the state Supreme Court have been criticized by some for declining to issue statewide procedures for lower courts to follow during the coronavirus pandemic, instead allowing each of the state’s very different 22 judicial districts to set their own rules.

“The COVID pandemic has revealed what a lack of leadership can do to public confidence in the courts,” the Colorado Criminal Defense Bar said in a statement that specifically called out Coats as the leader of the state’s courts. “… Within a matter of months, Colorado’s decades of consistent administration of justice has devolved into a shambolic mess.”

Those who have worked with Coats said the delegation of power to each individual judicial district fits with Coats’ usual approach to leadership.

“That is typical of Ben Coats,” Gleason said. “He wants the people who are living it every day to make those decisions. I don’t doubt for a second he’s had his hands involved in all the decision making, but he also understands that is why you have a chief judge, you delegate that authority to them. And as long as they don’t abuse it, it’s where it should be.”

On the bench, Coats’ questions to attorneys were tough, incisive and went right to the issue, said another former colleague, David Stark, who argued several cases before the state Supreme Court.

“He was not a showboat at all,” Stark said. “He was modest, self-deprecating at times — just a regular guy who was doing a terrific job.”