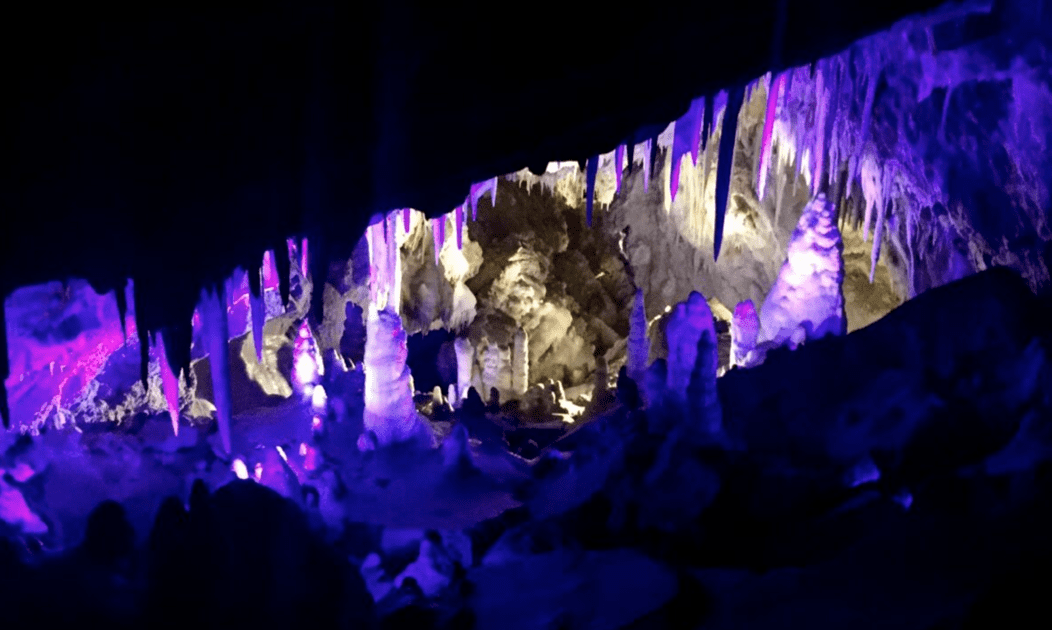 Unique features of the Fairy Caves include formations of flowstone that glisten when light hits the thin veils of water that glide down the rock walls. Researchers say the candle light glimmering off of the flowstone might have been what Darrow’s young daughter saw, mistaking it for fairies inside of the caves.

A combination of calcite and gypsum, called moonmilk, powder the cave’s interior walls, creating a mystical atmosphere roughly 70 feet beneath the earth’s surface.

Between 1897 and 1899, Darrow and a crew hand-chiseled rock to make a tunnel from the Fairy Caves to explore more of the underground. The tunnel ends at a cliffside balcony called Exclamation Point, where a panoramic view of Glenwood Canyon and the Colorado River is revealed. At the time, this ‘grand finale’ viewing point is where Darrow’s walking tours ended. Visitors today can still walk the oldest tunnel at Glenwood Caverns, but extensive expansions have been made in recent years.

At one spot along the tour, an underground canyon called the Eternal Towers can be viewed from below, allowing visitors to look up 40 to 50 feet at the rock ceiling above. Many additional rooms of the cave system have been revealed by Glenwood Caverns in recent years, showing various rock formations and colors. The Pendent Room boasts bulbous formations that are carved by air and water and the Register Room gleams with rich, saturated colors created by interaction with hot springs water. A third area, deservingly named the Reflection Room, features pools that reflect the surrounding stalactites, stalagmites, and soda straw formations.

The Fairy Caves are a Colorado gem that allows visitors to feel like they’ve stepped into another world. Glenwood Caverns calls itself the “8th wonder of the world” because of the fantastical natural beauty it holds within.