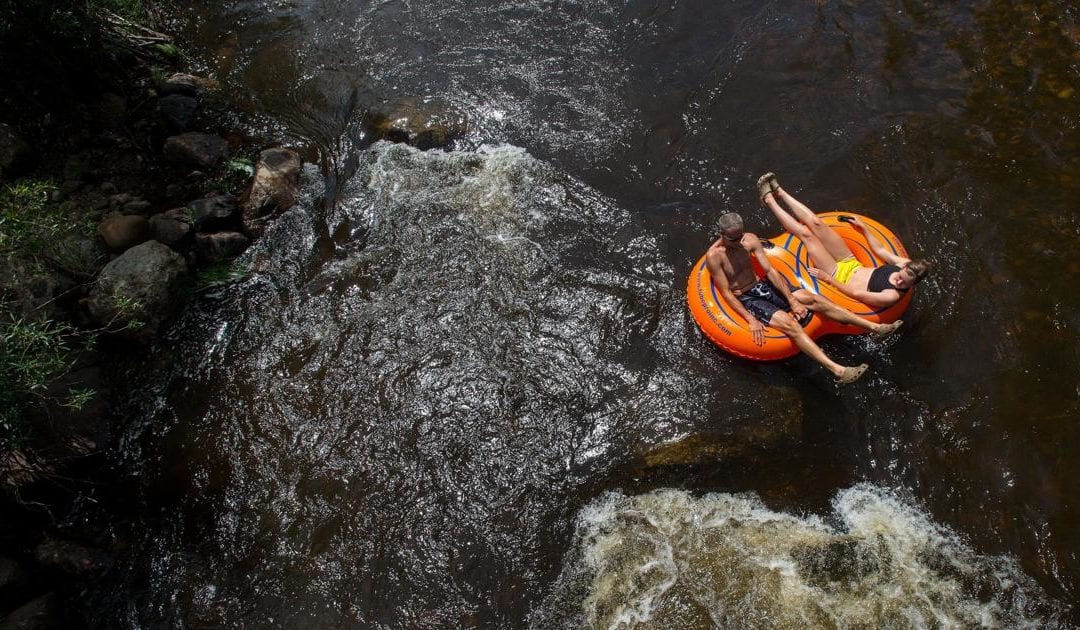 It’s hard to beat a sun-splashed summer day on a Colorado river.

That sentiment is shared by anglers, rafters and kayakers alike — and for good reason. But, when it comes to relaxation, there’s nothing quite like drifting down a river in an inner tube.

My first Colorado tubing experience came on the Yampa River in Steamboat Springs.

Tubing is a popular pastime in “The Boat.” What makes it unique in this part of the state is that the Yampa cuts through the heart of downtown Steamboat, offering tubers the opportunity to enjoy tasty local food and libations at numerous riverside restaurants along the way.

Another perk is that the local bus system allows tubers to park downtown and take a free ride to their put-in spot upstream, eventually drifting back to their vehicles.

Our group of four started the adventure just south of Steamboat. Upon arriving, we inflated the tubes we had purchased from a local shop and waded into the Yampa.

The water was running low that day, presenting a problem for which I had not mentally prepared — my buttocks periodically scraping the rocky riverbed below.

“Lift your body up in the tube to reduce the drag,” a friend and fellow tuber shouted after I yelped, sure I was bleeding.

Many groups of tubers dotted the river that day, some playing music and others taking part in various games. Small, beach-like areas were packed with picnickers.

This was summer in Steamboat. And it was so relaxing. Depending on the stretch of the river, it could even feel like a remote mountain stream despite being so close to a highway.

While the laid-back nature of the activity allows the mind to wander, tubers must stay alert.

As our group floated along, the water shifted from being tranquil. Rocks became more common and more disruptive, creating small areas of rapids. While the low flow of water had managed to keep us moving all day, it now lacked the depth to provide a path over obstacles.

Suddenly, a relaxing day on the water had turned into a desperate game of dodging sizable rocks.

A stand-up paddleboarder plunged into the water beside us, thrown by the rapids. Soon, my friends were flipping out of their tubes, struggling to collect their belongings as the rougher water whisked them away.

Amid the chaos, we spotted an oasis in the distance: Sunpie’s Bistro, a restaurant on the shore of the river.

Looking haggard and covered with mud and blood, our group trudged out of the water, tubes in tow. Local patrons of the eatery stared for a moment, but they were accustomed to this scene.

Drenched from head to toe, our group found the closest cluster of chairs and sat down for a well-deserved beer.

If you’re looking for a chance to kick back, relax and enjoy some Colorado sun, this is it. Just be prepared for potential obstacles along the way. Pick a sunny day when the water isn’t running too high or too low. And utilize the bus system to make the experience more convenient.

It’s that simple. It’s that fun.